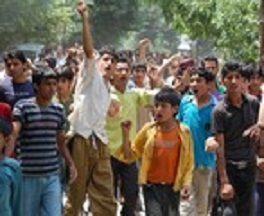 The alleged rape of a mentally unstable woman from Gujjardara village in Manzigam, Kulgam, supposedly by two unknown Army personnel, is presently in the eye of a storm. Even as the hapless woman and her family are trying to come to grips with the problem and also going through the investigation process, vested interests are on overdrive in their attempt to gain political mileage from the unfortunate incident. The opposition has already fired its first salvo with the Peoples Democratic Party leader, Mehbooba Mufti’s, visit to the locality where the victim resides. While urging the people to exercise restraint she decried the “callous attitude and incompetence” of the government which, according to her, leaves no stone unturned in forcing the people to agitate. In typical political double speak she has sought immunity for herself in what could lead to upheaval and yet sowed the seed for the same.

While preparing his calendars’ for the imminent agitations planned in the wake of this incident, Syed Geelani has asserted that the top Army Commander in Srinagar, Lt General SA Hasnain, is giving misleading statements to shield his soldiers. “Because the Kulgam incident has once again exposed the evil face of army and its hollow claims about normalcy in Kashmir, the human rights violations graph going down, etc, the army would go to any extent to dilute the seriousness of the issue,” asserted Geelani. “There is army raj in Jammu and Kashmir, and instead of demilitarization and scrapping the black laws that give impunity to forces, the army is being vested with more powers,” said Mirwaiz Omar Farooq.

Even as the separatists and other political bodies are trying to extract their piece of flesh from the unfortunate incident, the series of protests that are being engineered in Kulgam are, by no means, assisting in the investigation into the crime. When asked about the likely schedule of the identification parade in the Army camp the DIG said, “Police was today busy in maintaining law and order following Friday’s violent clashes in Manzigam. It will be carried out at an appropriate time.” This kind of distraction severely hampers the investigations. In the Shopian incident of 2009, crucial evidence was destroyed due to the mayhem caused by protesters and in this instance a repeat is possible in case the situation is not kept under control. Fortunately, the SIT is functioning undisturbed by these protests, but still, a calm atmosphere will be greatly beneficial.

The separatists are turning a blind eye to the prompt action that has been taken by the Army and the State government to get a breakthrough in the case. Lt General Hasnain may have said that the involvement of an Army soldier is improbable but he has also opened the Army for the investigation process. “I want to make it clear that this is an allegation and if there is truth in it, then it is a criminal act which warrants strict action against the guilty,” he has said. What more do the separatists expect from the General? The Army is fully cooperating in the investigation and has also initiated an internal enquiry into the incident. There should be no doubt that if Army personnel are found to be involved they will be caught and punished in a swift and exemplary manner.

This apart, the entire State machinery has been mobilised to ferret out the culprit. Chief Minister Omar Abdullah has acted most expeditiously; he has constituted a Special Investigation Team (SIT) under a Deputy Superintendent of Police which is working overtime to find the culprit. The team has visited the site where the alleged crime was committed and has collected all circumstantial evidence; necessary vaginal swabs and DNA samples have been taken for forensic examination. It is now getting ready to carry out an identification parade of the Army men deployed in the vicinity. A Deputy Inspector General of Police is giving periodic briefs to the media with respect to the progress being made in the investigations.

The investigation is likely to be hampered by the contradictory statements being given by the family of the alleged victim. The family members are now stating that the woman, who is under medication for a mental illness, had been missing for one night instead of the two that were being considered earlier. The medical report also says that there are no marks of violence or resistance.

This is an acid test for the State government and especially the JK Police and CRPF responsible for maintaining law and order in the area; they have to be firm yet humane and sensitive to the whipped up passions of the common man. It is on their adept handling of the situation that the further course of action of the unrest will depend. It is in this area that the Chief Minster needs to give his personal attention. A silver lining is that Army personnel who allegedly stand accused have no law and order responsibility in the area, hence, there can be no allegations of exertion of pressure by the use of force.

It is now up to the people of Kashmir to demonstrate which way their want their life to move. The incident has happened at a very opportune time for the vested interests – the tourist season in on the wane and the government is gaining a strong foothold, the security forces have, in the last few days, achieved resounding success in their counter terrorist operations. At this stage, any kind of upheaval will disrupt the momentum of peace and prosperity and that should be challenged at all cost. The crux lies in an early breakthrough of the case. The government should use every tool at its disposal to catch the culprit so that justice prevails and the people’s faith in governance is strengthened.