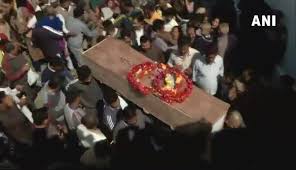 Constable Kultar Singh and Constable Farooq Ahmed Yatoo were two honest policemen serving the Jammu and Kashmir Police with all dedication while being posted in the Kashmir region.

On Sunday, 25, February, they were brutally killed by terrorists while on duty. While Yatoo was a native of Kashmir hailing from Chadoora, District, Budgam, Kultar belonged to Kathua in Jammu region. Both sons of the soil were killed by the so-called Jihadis whose professed objective is liberation of the region from “Indian occupation.” They are now remorselessly killing the very people whom they have come to “liberate.” Here we have a classic example of the concept of Azaadi (freedom) going all wrong.

Constable Kultar was killed at the Chrar-e-Sharif shrine in Budgam that is revered by all Kashmiris’ be it Pundits, Muslims or Sikhs.  The conviction that emerges is that the terrorists have scant regard for the religious sentiments of the Kashmiri people who follow a form of Islam that is very different from that prevalent in Pakistan and the Middle East. The terrorists wish to replace the Sufi culture of Kashmir with their own concept of Wahabi-Salafi Islam which goes against all that the enlightened Kashmiri culture stands for.

Sadly, none from the separatist Hurriyat conglomerate, who leave no opportunity to present themselves as the true representatives of the Kashmiri people, came out to condemn the dastardly terrorist act against the people and the culture of Jammu and Kashmir. This silence speaks volumes about the road that the Hurriyat is following. Their self serving agenda stands totally exposed.

There are a number of reasons behind targeting of Policemen of Jammu and Kashmir by the terrorists. Being low in strength and short of weaponry the terrorist need kills that garner attention, especially media attention. This is the only method by which they can prove to the world that they are still a potent force to reckon with. Policemen, deployed in small groups in and around Srinagar, offer a relatively easy target than the army and paramilitary personnel. The latter can be engaged only with ambush, IED and suicide attacks that are more difficult to carry out. The terrorists also take away the weapon of the targeted policeman to build on their depleting weaponry.

The killing, according to terrorist ideology, serves the purpose of increasing deployment of the security forces and intimidating them, giving a message that the terrorist cadre is still relevant, building on the weapon strength and instilling fear among the locals.

Terrorist ideology and objectives are definitely not being met by mindless killing of innocent local Policemen and civilians. The security forces have well evolved standard operating procedures that are time tested; they do not get unnerved by murderous attacks however unfortunate they might be. In fact, the killing of their comrades instills in them motivation to finish the scourge of terrorism all the more faster.

It is well known that terrorist are losing their grip due to depleted strength, even recruitment of locals in the cadre is in the downswing. Petty incidents of insane killings are not likely to change this reality.

Taking away of the weapon is of course a serious matter, but lack of ammunition will render the weapon redundant in the long run. This aspect, however, continues to be a cause of concern.

The locals have, since long, seen through the terrorist agenda and are not likely to get intimidated by such incidents. Most counter-terrorist operations continue to be conducted on the basis of human intelligence with location of terrorists provided by the locals themselves. Killing of Policemen garners local sympathy for the force and provides impetus to the intelligence process.

It is notable that on many earlier occasions, terrorist leaders like Syed Sallahuddin and even Hurriyat leaders have spoken against targeting of locals, including policemen, by terrorists. They have been highlighting the massive loss of goodwill due to such attacks and its consequent negative impact of the so-called Azaadi struggle. It was for this reason that violence against locals reduced about a decade back and continued to remain at low ebb, till lately.

Now, it is quite apparent that the good advice has been set aside and violence against locals, including extortion, molestation and other unsavoury activities is on the upswing. The reason could be frustration, desperation or a mix of both under pressure of relentless counter-terrorist operations being carried out by the security forces with great success.

There has been an outpouring of sympathy for Constable Kultar Singh and Constable Farooq Ahmed Yatoo. “Pained at the loss of a valued colleague SGCt Kultar Singh JKAP 13 Bn who attained martyrdom in an attack on J-K Police guard for protection of Chrar-e-Sharif shrine,” said the Director General of Jammu Kashmir Police, SP Vaid. He followed this with another tweet advising caution to his troops, “We have lost another precious life when Constable Farooq Ahmad was martyred today in Srinagar. Be more careful boys, it’s the proxy war that we are fighting in Jammu & Kashmir,” he said.

The social media is full of words of solidarity and sympathy with the bereaved families. Many of these messages have emanated from the people of Jammu and Kashmir. The funeral of the two brave fallen policemen was attended by thousands of people who shouted pro-India slogans.

The nation stands firmly with its soldiers and policemen who are fighting a war against an evil, remorseless enemy. Despite the loss of two precious lives what has emerged clearly is that it is the terrorists who are shaken by the turn of events and are making a huge mistake by hurting local sentiment. Their acts will only accelerate their demise while the sacrifice of the soldiers and the people of Jammu and Kashmir will not go in vain. We are now witnessing the beginning of the end of terrorism in Jammu and Kashmir.

(Jaibans Singh is a reputed defense analyst, author and commentator)