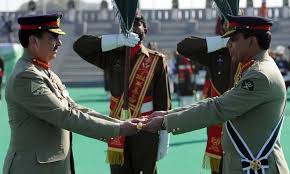 The handing taking over ceremony between chiefs of the Pakistan army is a huge public affair. It is held in a beautifully laid out stadium packed with army officers, civilian dignitaries and even children. The process includes a ceremonial parade, handing over of the baton from the outgoing to the incoming chief and an address by both chiefs. This process, by itself, explains the power equation of the Pakistan Army chief in the affairs of his country.

Prime Minister Nawaz Sharif may have got the man of his choice in General Raheel Sharif but it has not come by easily, especially so, since the senior in line, Lt General Haroon Aslam, had the support of General Kayani. Such was the power of General Kayani that to keep him in good humour the Pakistan government spent many days trying to convince General Aslam to take on the mantle of Chairman, Joint Chief of Staff Committee. General Aslam opted for no job at all if not the prized one and preferred to retire, much to the relief of the Nawaz Sharif government. Nawaz Sharif’s distrust for General Aslam stems from the fact that, as a Brigadier, he had led the team to arrest Nawaz and his cabinet members during the General Musharraf led coup in 1999.

As the accolades flow for General Kayani it becomes important to look into the legacy that he is leaving behind for his country, the sub-continent and the new incumbent. As a general he baulked at the prospect of going into conflict with a militant body as primitive as the Tehrik-e-Taliban Pakistan (TTP). The resultant indifference of the Pakistan army for the people of Swat and other tribal areas led to the killing of many innocents in increasing Taliban atrocities. When the army did get its act together a lot of harm had already been done. As things stand the TTP continues to be a force to reckon with, poised to become all the more fundamentalist under the leadership of Mullah Fazlullah known for his extreme views and rigid postures.

The mismanagement of operational objectives did not deter the army under General Kayani from interfering in governance despite the show of being apolitical champions of democracy. It is well known that General Kayani vetoed sending of DG ISI to India in 2006 to assist in the investigation of the Mumbai terror attack. In 2010, he called government secretaries to his office for briefs and then took charge of the Pakistan delegation to the US. In fact, the US was more comfortable talking to General Kayani than the political leadership under Asif Ali Zardari since it was he who called the shots.

Foremost amongst the tasks of the new chief and his biggest responsibility would be to build confidence in the democratic credentials of the country and to set out the balance of the delicate civil-military relationship. His policies will chart out the course of democracy in the nation and the future role of the army in the scheme of things. The second issue of importance would be facing the challenge of growing fundamentalism and its impact on the tenuous internal security situation. The army needs to build confidence amongst the people who are suffering terribly due to internal turmoil, especially so, along the western frontier, in Balochistan, in Sindh (Karachi) and other provinces as well.

The people of FATA and other frontier tribal areas have no love lost for the Taliban; they are not even against the US drone attacks since they kill Taliban leaders. They are looking for respite that only the army can provide to them. This is something that General Kayani took a long time understanding and it is something to which General Sharif should be giving maximum attention. Their continued suffering cannot be ignored any longer.

On the politico-military front the dice is all the more laden. In a totally unprecedented situation, two former army chiefs, General Pervez Musharraf and General Mirza Aslam Beg, as also an ex-Director General of Inter Services Intelligence, Lt General Durrani, are facing inquiries initiated by the government. There is also talk of instituting a Kargil commission which could well lead to a wave of arrests of retired military personnel. Whether General Kayani was taken into confidence while initiating these proceedings or not is not known, the fact remains that the issues will find closure in the time of General Raheel Sharif and history will judge him by his actions in the said cases.

Foreign policy has always been the exclusive domain of the Army in Pakistan; this is where the maximum problems are envisaged in the near future with the drawback of US and NATO forces from Afghanistan and the growing cool vibes between Pakistan and the US accentuated by the stand against Drones especially by PTI in Khyber Pakhtunkhwa. General Kayani had built a good relationship with the US foreign office and the military commanders; General Sharif will have to start from scratch at a time when maximum changes are expected to come by in the region.

There is also the relationship with India that will need to be steered by the new Chief. Of late, things have been quite acrimonious along the line of control between the two countries due to incessant and inexplicable ceasefire violations by Pakistan; now Nawaz Sharif has, out of the blue raised the bogey of war over the Kashmir issue. India is likely to be sensitive towards such transgressions in view of the forthcoming elections. Undoubtedly, Pakistan and its army will need to play out its cards with great deliberation.

The agenda left unfinished by General Kayani has to be steered to its logical conclusion by the new incumbent. It is quite evident that General Raheel Sharif he has a tough job ahead of him. The eyes of the world will be upon him as he charts out the course of his Nation through turbulent waters.