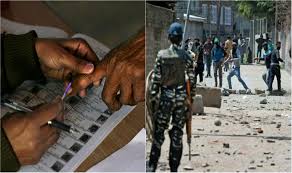 Eight lives have needlessly been lost in the Kashmir Valley! As the by-poll process in the Srinagar constituency of the Kashmir valley commenced, security forces deployed for election duty were attacked by violent mobs engineered by Hurriyat separatists and anti-national elements to disrupt the polling.

Left with no option when the stone pelters closed in, the police and paramilitary personnel released tear gas shells and were also compelled to fire at the mobsters. It was in this melee that the eight casualties occurred.

The by-polls in the Srinagar constituency are inconsequential; they will not have any effect on the political scenario at the state or the national level. Low polling was expected under the circumstances and more so because of the inclement weather conditions that were witnessed a few days before the poll.

The only people who had something to gain from the entire jamboree were the separatists. It provided to them an opportunity to prove their relevance to their masters sitting across the border and this is exactly what they have done.

The riots were the result of a frenzy whipped up by people who specialise in creating an environment of unmitigated rage through invocation of religious and wholly skewered nationalist sentiments. Those dead do not include even a low level functionary of the Hurriyat which remains in the forefront of creating such disruptions. The separatist coffers will tick even as eight families come to terms with the loss of their loved ones.

Those who have died were young boys, some in their teens. They would have little understanding of the ideals for which they have given their life. They would be quite unaware of the inconsequential nature of the By-polls. Be that as it may, it would be difficult to describe them as innocent since they were participating in an anti-national activity.

This said, they did not deserve to die! They lost their lives on the altar of the insatiable ambition of a few evil forces whose strings are in the hands of the Nations’ greatest enemy – Pakistan.

Some responsibility also has to be taken by the senior mainstream leadership in the Kashmir valley. If Tariq Hameed Karra had not left the PDP and joined the Congress there would have been no reason to hold these polls at all. Notwithstanding all the high sounding statements that he made after leaving his parent organisation, it was quite obvious that he was unwilling to work under a younger Mehbooba Mufti and a woman to boot.

Did an experienced politician like him not understand the consequences of a by-poll in the sensitive area of Srinagar? Does he, as a  self professed leader of the Kashmiri masses, not realise that forces of disruption in Jammu and Kashmir resort to every conceivable method to create a situation in the state that would make holding of elections an unacceptable security risk.

Increasing the threshold of terrorism; instilling fear among the people by ominous boycott calls; issuing open threats to life and property; causing social disruption through a chain of lockouts and mob frenzy of stone pelting are some of the methods that will be employed to scuttle the elections.

He knows all this but instead of containing these forces and working towards destroying them on being given a mandate by the people he chose to exhibit support for the stone pelters which egged them on even more. A good question to Karra at this stage– has the situation in the valley improved by your so-called righteous decision? Is this what you dream for your people as you take on the mantle to lead them?

Farooq Abdullah, during his election campaign, left no stone unturned in getting political mileage out of the stone pelting incidents. He called the stone pelters nationalists and literally condoned the illegal and dangerous acts that they were indulging in. Has he forgotten that order to purchase the much castigated pellet guns was given by his own son when he was in power – for use against the very breed of stone pelters whom he is now eulogising? A question on Farooq Abdullah’s changed posture to a political thinker in Kashmir drew a rueful response. “Sab jaante hain ki Farooq sahib hawa ke saath rukh badal lete hain (Everybody knows that Farooq   changes course with the wind.” Well!! This time round the course changing has led to the loss of precious lives and Farooq has their death on his conscience.

Responsibility also lies on the shoulders of the families of the young boys who are indulging in this arsonist activity.  They are mature enough to understand the opportunistic games that their leaders are playing, so why are they allowing their children to become casualties to such low level politics? What will happen after all this? Farooq Abdullah will probably win, but his being a Member of Parliament will not make even an Iota of a difference to the political landscape at the national level. He fully understands this so he will stay happy with the palatial house that will come his way in Delhi from where he can pursue his philandering ways. Is this a worthwhile reason for the sons of their families to give up on their lives?

The leaders and elders in Kashmir have failed to protect their younger generations from the propaganda and evil machinations of known enemies of the nation and its people. Let us hope that they will realise their errors and attempt to reverse the situation.