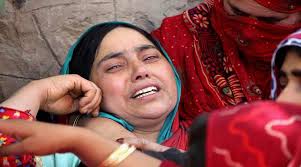 “The objective of the ongoing militancy in Kashmir is imposition of Sharia and not creation of a new secular state.” This statement by Zakir Musa, a Kashmiri terrorist aligned with the Pakistan sponsored terrorist organization, Hizbul Mujahedeen (HM), has laid bare the fact that ideology aligned with Islamic State (ISIS) is getting to dominate the narrative in the Kashmir Valley.

The actions of this set of terrorists have the indiscriminate and brutal signature of the international terrorist organisation that they emulate.

The killing of five Kashmiri policemen and two bank security guards by these terrorists in Kulgam, Kashmir, in early May, followed by the recent vicious killing of a Kashmiri army officer, Lieutenant Umar Fayaz, bears testimony to their complete lack of compassion. Like their role models in the ISIS, they have no compunction in killing their own people in cold blood.

Zakir Musa in his recorded statement even threatened to slit the throat of the Hurriyat leaders if they dared to continue propagating Jammu and Kashmir as a “political issue” and vouching for the creation of an independent secular nation. The Hurriyat leaders are so terrified that they have not even condemned the killing of Kashmiris’ by the terrorists and have, thus, lost whatever little credibility they enjoyed.

Kashmir now has a set of local terrorists who have digressed from the agenda laid out by their prime supporter, Pakistan, and have adopted the ultra radical, Saudi Arabia propagated Salafi-Wahabi model of Islam which international terrorist organisations like the ISIS and al Queda identify with.

The three decades of investment in Mosques, Madarasa’s (Islamic seminaries) and Maulvis (Islamic religious teachers) by Saudi Arabia and its proxies has succeeded in creating a dent in the enlightened Sufi concept and culture of Islam followed by the Kashmiri since millenniums.

It is notable that Zakir Musa is the successor of the terrorist Burhan Wani whose killing by the security forces in July, 2016, catalysed the current unrest in Kashmir.

While he was alive, Burhan Wani was considered to be just another terrorist of the HM cadre whose notable ability was not fighting but a popular social media presence.

At that stage, little thought was given to his digression from the Pakistan sponsored agenda and getting more aligned to the agenda of the ISIS.

Now, with his successor, Zakir Musa, advocating the same ideology there is no room for doubt that it is here to stay. The ISIS signature is more embedded than the mere waving of its flag as was the case earlier.

That a significant portion of their terrorist cadre has shifted loyalty has come as a shock for the HM leadership, which is an out an out proponent of the Pakistani agenda of wresting Jammu and Kashmir or at least Kashmir from India.

“Such a statement (will slit the throat of Hurriyat leaders) is unacceptable to us. It reflects the personal opinion of Zakir Musa,” said HM spokesperson in a valiant attempt to support the beleaguered Hurriyat leadership that has been assisting the HM propagated Pakistani agenda for so many decades now.

The riposte from Zakir Musa was swift and ruthless, he threatened to disassociate from his parent organisation in pursuance of his ideology. It seems that he was later made to take back his words and he agreed to first fight the common enemy – India, and then settle issues of ideology.

The proliferation of radical Islam worldwide has, by now, established a pattern. Predominantly, radical Islam is flowing from the Sunni followers of the Salafi-Wahabi sect.  As a first step the fundamentalist Islamists neutralise all non-Sunni Muslim communities in the targeted region, including non-Sunni sects of their own religion. Once this is done, they turn to their own and get even more destructive than before in killing each other.

A prime example is the ISIS which unleashed genocide against the Shiite Muslims in their occupied territories of Iraq and Syria apart from the unspeakable atrocity that it unleashed on the people of other religions like the Yazidis and the Christians. Now the situation over there is such that the Sunni forces of Iraq as well as Syria are out to kill the Sunni’s who form part of ISIS.

Neighbouring Pakistan is determined to exist as an Islamic State comprising only of Sunni Muslims. It has systematically decimated the Hindus and is criminally targeting the Ahmadias and the Shias too.

Since Pakistan is now done with the minorities, the Sunni versus Sunni phase has commenced with the Punjabi dominated Pakistan Army openly killing Sunnis of the frontier Provinces and Balochistan.

The advent of Pakistan sponsored radical Islam in the Salafi-Wahabi mould in Jammu and Kashmir witnessed the exodus of the Kashmir Pundit community. Now that a Sunni-Muslim dominant society has been created, some over there are moving on to the next step of targeting their own kith and kin.  If this concept is allowed to proliferate, it will lead to a reversal to the pre-medieval ages with disastrous consequences and untold human tragedy.

Radical Islam will be eradicated from the areas where it is presently holding sway as is apparent from the dire state of the ISIS. The al Queda is also a weak apparition of its previous self.

Kashmir, unfortunately being the last to be radicalized, will attract the remnants of the failed system from across the world and thus become a battle ground for keeping alive an ideology that it does not relate to at all.

It is necessary for the common Kashmiri to comprehend that danger being posed by a few ill informed upstarts to his civilization, his culture, his religion and his very concept of life.

The battle now is no longer about aligning with Pakistan or with India or remaining independent; it has a much more dangerous existential dimension which needs to be addressed with utmost seriousness.