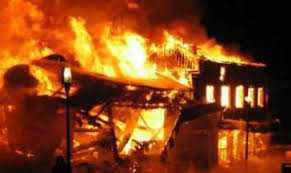 More than two dozen schools in the Kashmir Valley have been burnt down and still there is no clue about the perpetrators of this heinous crime. The Jammu and Kashmir Police and the intelligence set up is not exactly covering itself with glory. Weeks into the problem and they continue to remain clueless with no tangible counter action plan in place!

The situation raises serious doubts about the capability of the police force to handle security in the state without assistance from the Indian Army. Those who cannot catch petty criminals cannot be depended upon to deal effectively with well trained terrorists?

The Kashmiri people put a lot of value to education, and as such, no Kashmiri can be party to such a despicable act. Even Muzaffar Wani, father of the slain terrorist Burhan Wani and a teacher by profession, has spoken strongly against this terrible catastrophe. “This is not right, whoever is responsible for this is doing no good to society,” he said, while issuing a fervent appeal for restrain against targeting the educational institutions of the state.

It can be safely surmised that this is the work of foreign forces in concert with their domestic stooges.

Many feel that it is goons on the payroll of the separatist Syed Ali Shah Geelani and his ilk who are carrying out this unholy act. Geelani had the gumption to suggest openly that education “blossoms” during periods of shut down. Already quite low on the popularity graph of the people in Kashmir, there is now a feeling of widespread outrage against him and his organisation. Social media is abuzz with #GuiltyGeelani and #KashmirRejectsGeelani campaigns.

Frustration of the people hit monumental proportions with news reports of his own granddaughter being facilitated to appear for her examination while the rest of the valley is suffering so badly.

Geelani alone should not be blamed for the situation; other separatists are involved in the despicable act as much if not more. Yasin Malik, while in a tearing hurry to put the blame on the government let the cat out of the bag. He said that the government was trying to open schools by hook or by crook to give an impression that Kashmir was inching towards normalcy.

What this statement implies is that closure of schools and education institutes is a primary indicator of lack of normalcy in the Kashmir valley, which is the main objective of the separatist and disruptive forces. With a mindset of this nature what would one expect from the likes of Yasin Malik?

While the “politics of schools” are moving in full steam, one wonders as to where the so-called liberals, those in Delhi whose heart bleeds to all thing Kashmiri and Pakistani, are hiding. Do they not see a strong element of human rights violation, and that too of school going children, here?

Where are the candle light marches and the energetic television debates? The least that one would expect is a statement from these self proclaimed guardians of society and morality is a statement condemning the act;  even that has not been forthcoming!!

The world has witnessed many movements for freedom and social change. India gained independence from British rule due to one such non-violent movement. None of these movements witnessed attacks on educational institutions or use of young school going children as tools to further the agenda.

Logically speaking, a society looking for change would need educated, proficient manpower to sustain the change should it come by. If the younger generation is disabled than where is such a resource going to come from?

Concerned voices are speaking of a deeper agenda of the enemies of Kashmir involving destruction of the education infrastructure so as to keep the next generation enslaved in the darkness of ignorance. Only then would there be enough resource available for radicalisation, stone pelting, drug abuse and terrorism. The sooner the people of Kashmir heed these voices and understand this evil design the better for them.

Burning down of schools indicates that the objective of the divisive forces is enslaving, not freedom for the people of Kashmir.

The people of Kashmir joined hands with the Indian army to eradicate the scourge of terrorism from their beautiful land. Their future is, once again, being challenged by some immoral forces who wish to ruin their younger generations. They need to generate the will to fight these forces with vigour similar to the one shown in the “do or die” battle against terrorism.

There is an urgent need for a combined effort by the government and the people to quell the criminal activity as soon as is possible. The government should generate determination and hold the School Board examinations within this month as decided, such and act would herald the total failure of the disruptive forces, who have burned down schools with the specific purpose of derailing the examinations.

Alongside, there is a strong case for identifying those who are behind this nefarious activity so that the actual enemies of the people are exposed.

While the government needs to quickly re-establish its writ and credibility the disruptive and arsonist forces should realise that they will be caught sooner than later and will have to face the ire of the civil society.

(Jaibans Singh is a noted analyst and columnist)