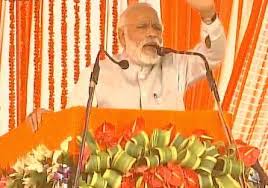 “I want to tell the youth of Kashmir – you have two roads in front of you that will guide your destiny; on one side is tourism and on the other side is terrorism. So much blood has been spilled over the last 40 years, but nothing has been achieved except that mothers have lost sons…” These fateful words were spoken by Prime Minister Narendra Modi on April, 02, at Udhampur, Jammu and Kashmir, while inaugurating the 9.2 km Chenani-Nashri tunnel.

The tunnel will give all weather access from Jammu to the Kashmir valley, while cutting down the distance by more than 30 kms and the time of travel by about four hours. The economic potential of the infrastructure, in terms of enhanced tourism and business opportunities, is clearly manifest.

The misfortune of the Kashmir Valley is that while the Prime Minister was inaugurating the tunnel and giving his historic speech to reach out to its youth, separatists and divisive elements were busy administering a forcible shut down and whipping up anti-India sentiment.

The terrorist wing of this evil nexus carried out a grenade attack on the CRPF in Nawhatta, Srinagar, which led to the unfortunate death of a Police Constable even as seven personnel sustained grievous injuries.

These people, working at the behest of inimical foreign forces, were attempting to undo the good work that is being done for the benefit of the people of the region. It is quite evident that the determination of the enemies of the people to keep the Kashmir Valley in a constant state of turmoil increases proportionately with every success achieved in ushering development, prosperity and peace in the state. Undoubtedly, more terrorist attacks and social disruptions will be engineered in the coming days.

Prime Minister Narendra Modi meant well when he offered a choice between tourism and terror, but there is a catch here.

The terror and divisive industry operating in the Kashmir Valley has a financial outlay of upwards of Rs 1000 crore annually which goes into the hands of a few but powerful people who have sold their souls to Pakistan.

The tourism industry, on the other hand, is afflicted with a series of road blocks ranging from natural disasters to poor infrastructure, nepotism and corruption.

The measly four lakhs tourists who visited Kashmir in 2016 do not give any confidence of tourism emerging as a mainstay of the economy of the valley. The manner in which the region is witnessing violence and disruption further generates a sinking feeling of a bleak future for tourism in the region.

The terror industry, therefore, emerges as a more viable economic option for the youth who are frustrated due to lack of employment opportunities.

“I, on behalf of people of Kashmir, invite the people of the country and abroad to visit Kashmir and enjoy our hospitality and natural beauty of Valley,” Chief Minister Mehbooba Mufti told reporters after inaugurating a water sports festival in the valley on December, 10, 2016. Four days earlier the separatist leaders Syed Ali Geelani, Mirwaiz Umar Farooq and Mohammad Yasin Malik had issued a similar appeal to tourists.

The appeals come across as unconvincing on two counts. The first is the inability of the Mehbooba Mufti led state government to maintain the required level of peace and tranquillity that would instil confidence among tourists to visit the valley. The second is the fatuous nature of the appeal made by the separatists considering that they are playing havoc in the region with a constant stream of agitations and violence. No right thinking person would believe a word of what they say.

While the chief minister of the state is going overboard to selling the Kashmir Valley as an ideal tourist destination to the world, it is the innocuous and understated Jammu and Ladakh that are filling the coffers of the state exchequer. The Mata Vaishno Devi Shrine witnessed a tourist foot fall of 77 lakhs in 2016 while Ladakh as a tourist destination is gaining popularity with each passing year.

Kashmir, therefore, has been reduced to being a non-entity in the overall tourism profile of the state and will need a herculean effort to bounce back. Even the first step in this direction has not been taken. In fact, the terror machinery is doing very thing possible to ensure that even the highly reduced level of four lakh visitors in the preceding year is not met in 2017.

While the security forces are engaged in a “do or die battle” to reduce the signature of terror before the tourist season sets in, the divisive forces are resorting to innovative ways to stop them from achieving their goal.  The terror strategists have devised a modus operandi of using locals as a diversion to break down the security cordons during counter terrorist operations. This produces delightful visual copy of the valley being in a state of turmoil for the sensationalist media and is being used to good effect.

All of this is not helping the cause of projecting Kashmir as a “paradise on earth” where tourists would come in droves.

The terror industry looks upon the tourism industry as a direct threat; it is doing everything possible to restrict the latter from flourishing and will continue to do so in future too.

The solution lies in a mass movement by the people against the terror mongers and their stooges and this is exactly what the prime minister was hinting at during his speech in Udhampur. Given the money and muscle power that the evil forces of division and disruption possess it is easier said than done, but then, who has ever been able to withstand the collective will of a determined people?

It is sincerely hoped that the people would respond to the sage and honest advice given by the prime minister and the situation in the valley would take a turn for the better in the near future.