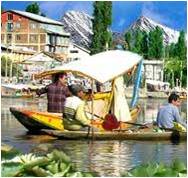 For those who grew up in the 1970’s, Kashmir was a Shangri-La type paradise on earth where handsome young men went to woo lovely damsels. The most renowned and successful romantic films of famous Indian heroes like Rajender Kumar, Shammi Kapoor, Rajesh Khanna down to the younger generations of Rishi Kapoor were shot in Kashmir and were huge box office hits.

Those who used to visit Kashmir in happier times two decades back would vouch for the modern texture of the Kashmiri society. Srinagar not only boasted of some very lovely theatres like the Broadway, it also had a few discos – something unheard of anywhere in North India other than New Delhi at that time. Five star hotels like the Oberoi Palace were standard destination for the rich honeymooners while those less fortunate would opt for more humble but equally vibrant dwellings. Regardless of status or budget, Kashmir was the favourite destination of Indian honeymooners of yore. To put it succinctly, a holiday in Kashmir was a must for any youngster of substance and there was not one person who did not vow to get back at the earliest opportunity, such was the lure of the place.

What is it that made Kashmir such a favoured destination for fun and enjoyment? After all there are some equally beautiful locales in Himachal Pradesh, Darjeeling and many other hill stations in India, yet, it was only Kashmir that people had in their minds all the time. The answer is simple. It was not only the enthralling natural beauty of Kashmir which mesmerised people; it was the famed Kashmiri hospitality, the polite Shikara (Boat) riders, the warm houseboat owners, the beautiful Kashmiri women in their colourful attires, the haunting Kashmir music, the graceful and lilting Kashmiri folk songs, the sumptuous Kashmir food; overall, the sheer joy of being in the most beautiful place on earth which compelled film makers and tourists alike to visit the place in hordes

A lot of this was due to the intrinsic culture and background of the Kashmiri civilisation. Kashmir is probably the only place in India which has a recorded history going back to 5000 years. The document is called the Rajatarangini. The genre of Islam and Hinduism practiced in Kashmir is quite different from that found in the rest of the country or the world for that matter. Both are immersed in a unique brand of Sufism epitomised by a belief in common saints. This is the reason behind the common language, common customs, common dress, common food, even common religious practices that both communities have followed for centuries. It is also the reason behind the inherent secularism of Kashmiri society heralded today as “Kashmiriyat”. Kashmiri’s thrive on all such things that are graceful and elegant be the cinema, music, art, culture, cuisine or literature? Even today the biggest names in the field of art and culture are of Kashmiri origin. With such deep rooted traditions and culture, such liberal and emancipated beliefs, such modern and accommodative attitudes it is no wonder that the Kashmiri people are so well liked by those who visited their beautiful lands.

The effort being made by a small segment of religious bigots like, Syed Ali Shah Geelani and Asiya Andrabi, to undermine the liberal culture and disposition of this beautiful land of Sufis is a matter of great despondency. Is it proper to expect the Kashmiri’s to forsake their age old culture to introduce fundamentalist tenets of Wahabi Islam? What is more exasperating is that these very fundamentalist tenets have been rejected by all liberal sections of Muslims the world over? Even Pakistan has always rejected such restrictive practices and its society continues to reject them despite a forceful attempt by fundamentalist religious forces to take control of things. How can Kashmir think of getting into this regressive mode?

A fundamentalist attitude goes again the basic character of the people of Kashmir. Those advocating it are making an evil attempt to thrust upon them a lifestyle that goes against their societal norms. A closer scrutiny of the situation reveals that the intelligentsia, the student community, the traders, the common man etc, have never raised a voice in favour of religious fundamentalism. In fact, with the advent of normalcy, the festivals of Kashmiri Pundits are, once again, being celebrated with great fervor jointly by the Hindu and Muslim community as was the case two decades ago.

It is only the marginalised segments of Kashmiri polity which is rooting for such fundamentalism, mainly to keep their agenda alive amidst increasing isolation. The likes of Syed Ali Shah Geelani, have, in their hey days, enjoyed the best that Kashmir had to offer and have gone further to provide the best for their children to settle them in the modern world. One wonders as to what moral authority they have to deprive the youth from finding a similar place in global society. When National Conference President Farooq Abdullah roots for opening of liquour shops and cinemas in Kashmir he is voicing a popular sentiment in the right direction. By attempting to derail liberal and modern practices the Geelanis and the Asiya Andrabi’s are trying to draw political mileage from social issues.

The people of Kashmir should look into this blatant attempt by vested interests to change their very way of life and regress them into the stone ages. With the situation getting back to normal they should march ahead to gain their rightful place within the country as a liberal, educated, modern and cultured people. They should prepare their children to compete with the best in the world as is their right. The time has come to get out of the oppressive and evil shadow of terrorism and look towards a bright and enlightened future.