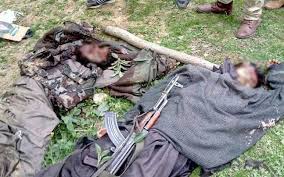 Official records suggest that 101 terrorists have been eliminated in Kashmir in the current year. The last few days, since declaration of election results, have seen conduct of incisive counter-terrorist operations in quick succession with very good results. On 31 May, two terrorists were killed in Pulwama and three in Shopian. A day earlier on 30, May, two terrorists were eliminated in Baramulla. All operations were carried out jointly by troops of Indian Army, personnel of JK Police and paramilitary forces. They were based on receipt of specific information about the presence of terrorists in the target areas and were conducted with incisive precision.

The operation exemplified the seamless synergy that exists between the security forces, as also the deep rooted intelligence apparatus that is in place to flush out terrorists. Most terrorist Tanzeems (groups) have been infiltrated by security forces and intelligence agencies, leading to credible information about the whereabouts of the terrorists. Moles are taking money to set up terrorists for encounters! In such a situation the terrorists do not stand a chance.

The new age terrorist in Kashmir can safely be profiled as an indoctrinated local youth who is both ill trained and ill equipped. With the Line of Control (LOC) virtually sealed, a well laid out pattern is being followed for recruitment of local terrorists. Those vested with the responsibility of recruiting local terrorists look for boys from middle class to poor families who are ready to sell their souls for a small amount of money or promises of a bright future in this world beyond (Jihad). Some are drug addicts and others, in the flush of youth, get impressed by the likes of Burhan Wani. Some, most unfortunately, join with the intention of impressing their girlfriends. The new local recruits cannot be sent across the border into Pakistan for training as was the case earlier. They are, therefore, indoctrinated, recruited, given some rudimentary instructions, handed over a rifle and some ammunition and let loose. Such ill trained terrorists are no match for the highly professional and experienced security forces. On top of it, they lack local support.

The terrorists move around in small groups and are not comfortable operating away from their own locality. Sadly for them, they are most vulnerable in their home base. There are some among their own people who sell them out.

The poor recruited boys, therefore, stand no chance once caught in the security dragnet except to surrender, as they are invariable and consistently called upon to do. Sadly, not many take this option and end up losing their lives. Most of these terrorists have a shelf life of only a few months, some die within days of joining a Terrorist Tanzeem (group) which, these days, is mostly the Hizbul Mujahedeen.

The killing leads to a eulogy in some local newspapers along with a well attended Namaz-e-Janaza (funeral procession), here too people are being paid by Pakistani stooges to join in so as to show a big crowd. The slain terrorists are mostly projected as devout Muslims, motivated by the idea of “sacrifice.”  For their recruiters, however, they are nothing more than cannon fodder to meet the objectives of some very evil forces. Death awaits all such youngsters who commit the fatal error of being swayed into the path of terrorism. It is a needless loss of life which leaves behind devastated parents, brothers, sisters and families.

There is no element of religiosity and sacrifice visible in the murderous and perfidious acts of the terrorists.  The sheen given by the media is absolutely ridiculous. It amounts to blatant spreading of disinformation. These boys do not realise that what they are seeing is a fatal illusion. In actuality, terrorist are like hunted animals, always fearful of the time when they will be shot and knowing full well that the time is not too far.

It is quite heartening to see the resolve with which security forces are targeting terrorists in the Kashmir Valley. The intention to rid the region from the scourge of terrorism is quite obvious. Such a pressure could not have come by without complete support of the government and the people. Anti-national forces at the behest of their foreign masters will try everything possible to reduce the pressure, now that the general elections are over and state elections slated for some time soon. Counter terrorist operation will witness interference in the form of stone pelting, shouting of slogans etc, massive crowds will be garnered for funeral processions of slain terrorists; rumours of innocents being killed will be floated; attempts will be made to frame security forces in cases of human rights violations. Herein will be the acid test of the government; it has to absorb the pressure and ensure that the momentum is maintained under all circumstances.

The people of Jammu and Kashmir do not want terrorism to gain ascendency all over again and the authorities need to ensure that it does not happen. It is important to take all desired steps to nip this problem in the bud! Some good steps have been taken but more needs to be done. No space should be given to terrorist and divisive forces to resurrect the draconian times when terrorism was at its peak.

Undoubtedly, the needless loss of life and the grief of the families leave a tinge in the heart and a prayer that this tragic circumstance may be controlled. It is the responsibility of the civil society and the parents in Kashmir to ensure that their boys do not get lured by the illusion that is being created. The government and the nation have spread out their hands to assist able and qualified Kashmiri youth in chalking out a career. It is this opportunity that needs to be leveraged and not the despicable, evil and violent path of terrorism that assures nothing other than ignominious death.

(Jasbir Sarai is a reputed security analyst and activist of AAP)