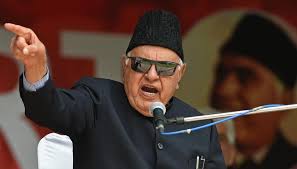 Polling has come to an end in Jammu and Kashmir with the Shopian and Pulwama Districts of the Anantnag constituency as also the Ladakhs constituency casting their votes on May, 6. The polling was spread over a month with the first phase taking off from Baramulla and Jammu on April, 11. Ladakh, as always, came out with full strength and witnessed a turnout of more than 63 percent. The Anantnag constituency also lived up to its reputation of rejecting the democratic process; the overall voter turnout there was a dismal 8.76 percent. It is notable here that the current elections have witnessed a considerable dip in polling in Anantnag, which registered 28.54 percent in the 2014 Lok Sabha elections. It can be said there is no change in the thought process of the people over the last five years in this particular region of the state. The situation has, in fact, gone from bad to worse. .

The security forces would have heaved a sigh of relief since, on their shoulders, lay the onerous responsibility of conducting an incident free election. In Kashmir, the violence threshold was increased many months before the polls were to commence. The attempt by terrorists to up the ante was countered with an equally decisive and well coordinated response from the security forces. Relentless and sustained counter-terrorist operations registered great success and broke the back of foreign sponsored terrorism in the Valley. It is for this reason that the desired degree of violence and intimidation by terrorists was not forthcoming during the polls. Undoubtedly, the security forces have risen to the challenge with their legendary maturity and commitment and carried out their task to perfection.

It is once again being said that low voter turnout was due to fear of the terrorists. The argument does not hold since those who voted have not suffered any adverse consequences. Kashmir is known to stand up against the forces of terror, this lack of enthusiasm for the polls builds the morale of the forces that work against the interest of the common man and it needs to change.

On the political front it is quite evident that, in a few urban areas of the Kashmir Valley, leaders have not been able to generate confidence among the people to come out and vote despite the platform of stability provided to them by the security forces.  Once again the highly effective psychological campaign by divisive forces has been successful in offsetting the appeal of the local leadership for all out voting.

The mainstream leadership has failed to put aside all inter-party issues to address this evil agenda of inimical foreign forces. It has failed to infuse confidence among voters of areas that have traditionally witnessed a low turnout. Personal interaction; social and political discourse on the problems of the people and resolving them with all honesty; development; psychological conditioning was required to break the impasse that has been there for too long; apparently, it s not been forthcoming.

Under the circumstances, there is a need to reassess that potential of the traditional leaders of the local political parties of Kashmir Valley. If they cannot motivate their people to come out and vote then they demonstrate a lack of acceptance as leaders. This point will need to be kept in mind by the incoming government at the centre while chalking out the Kashmir strategy. There definitely exists a space for new leadership to take wings in the Valley.

For Jammu and Kashmir the Lok Sabha polls are a rehearsal for the forthcoming Assembly elections scheduled for the later part of the year. It is time for the political parties and the administration to carry out yet another assessment of the situation and take corrective action to ensure a better show in the next polls.

Security will remain a critical aspect during the forthcoming assembly polls in Jammu and Kashmir. This is due to the determination of foreign forces and their “assets within the State” to scuttle the process. A twin strategy of political disruption and terrorist violence is invariably put in place for this purpose as was seen during the Lok Sabha polls. The effort is directed towards registering the presence of terrorists and intimidating the people. The level is gradually increased as the dates of polling draw near. The modus operandi will be repeated in the forthcoming polls too.

Infiltration attempts have seen a perceptible increase in the Kashmir valley since the last few months. The presence of terrorists in launching pads across the line of control has been registered. This is in view of the urgent need to fill up the depleted cadre well before the elections when they have an important role to play. The terror mongers have failed miserably on both counts till now but they have not given up, hence, the need for enhanced vigilance and alertness.

A concerted drive for local recruitment of terrorists will be made, money will be invested freely to attract candidates; drugs will be provided in ample quantity. Movement of manpower and war like material from the Nepal border is likely to be resorted to. Fidayeen attacks on security forces, killing of innocent civilians followed by threats and intimidation can be expected; political leadership especially at the grassroots will be specifically targeted. Attempt will be made to malign security forces by involving them in engineered human rights violations. Many other innovative and devious means will be applied to create a situation of chaos and anarchy.

There is a need to prepare for a concerted onslaught on Indian ideals of democracy and freedom in the coming months. The existing model to counter the evil designs has paid handsome dividends; what is required now is a motivated leadership that leads from the front and with personal example, such a leadership will get the support of the administration, the security forces and the people. No power can stand against such a collective will. It is hoped that the local leadership in Kashmir will introspect on its viability, potential, capability and acceptability to hold on to the mantle.

(Jaibans Singh is a reputed Geopolitical expert, columnist and author)