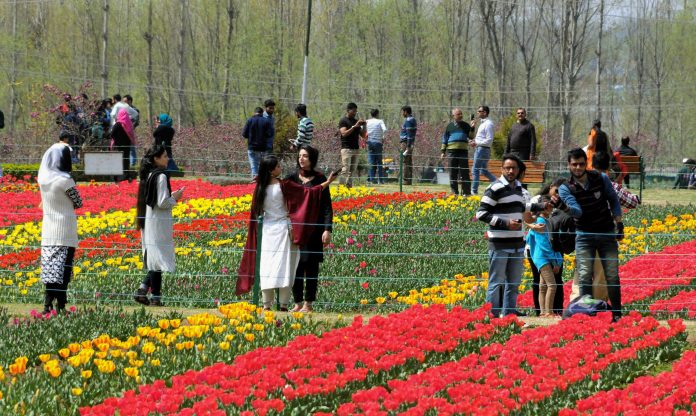 This year, tourism in Kashmir has found an unusual brand Ambassador in the person of Prime Minister Narendra Modi. “Whenever you get the opportunity, do visit Jammu and Kashmir and witness the scenic Tulip festival. In addition to the Tulips, you will experience the warm hospitality of the people of Jammu and Kashmir,” he tweeted. The tweet was in response to the opening, for this year, of the famous Tulip garden, Siraj Bagh, located on the foothills of the Zabarwan Mountains in Srinagar.

The garden remained closed last year due to the COVID-19 lockdown, it has been opened to the public this year only after putting in place all safety protocols. Social distancing will be ensured and wearing of face masks will be compulsory. Also, thermal scanners and sanitisers have been installed at the garden. It is expected that the initiative will attract a fair number of tourists since seeing the Tulip garden in full bloom is a very unique experience.

The initiative is also indicative of the efforts being put in by the Government to give a boost to the tourist season this year. It is a step in the right direction since people are now attempting to move out while taking all mandatory precautions. The fact that the vaccination process is underway has also contributed positively towards the urge to take a break and a holiday, what better place for the same than the beautiful valley of Kashmir.

Tourism had picked up in Kashmir before the COVID restrictions came in place, during the last few years, early morning walks along the Dal Boulevard would give experience of a place milling with people as well as vehicular traffic. The “insecure” hour had become a thing of the past. Shikarawalas who, a couple of years earlier, used to twiddle their thumbs for lack of work, now earned up to sixty thousand rupees in a month. Houseboats and hotels which had, for years, not let out a room for more than Rs. 1000/- a night were getting thrice as much. Handicraft retails were doing brisk business.

The graph took a downturn in 2020 due to COVID but is likely to see an upsurge yet again. What is important now is to sustain the momentum.

Those who will be revisiting Kashmir after a few years will be pleasantly surprised at the vibrant environment that is prevalent there. Thanks to the unrelenting efforts of the security forces led by the Indian Army, Kashmir today is safe and secure; terrorism has been contained and all areas are well covered by foolproof security grids. Security is at a high threshold even as visible deployment has been reduced considerably. The streets are bustling with activity with no indication of stress or the shadow of the gun that was looming in earlier times. Markets and commercial places remain open late in the evening.

On the streets vehicles holding registration numbers from other parts of the country are seen in large numbers, these people are visiting the region not only for a holiday but even to explore business opportunities that have come by due to the opening of the economy.  The situation has an element of positivity that is very heartening indeed.

Infrastructure continues to be a weak point in the chain of the development process. While the main roads are well laid the peripherals are in a state of neglect. It is known that every year, heavy snow takes a toll on the roads, however, some solution to the problem needs to be found. There is an issue of electricity supply and other modern amenities. Lack of infrastructure is always a deterrent to visitors and the sooner this situation is rectified the better. A tense security situation is no longer an excuse to stall movement in this direction, It is imperative for Kashmir to witness a considerable facelift in case the tourist and business potential is to be fully exploited.

The government and the people must realise that Kashmir has to compete with other tourist destinations like Himachal Pradesh that have made tremendous progress over time. The tourist brochures of Himachal Pradesh run into volumes while Kashmir has, as yet, not been able to grow out of its  Srinagar-Pahalgam-Gulmarg-Sonmarg circuit. Tourism requires innovation and that seems to be lacking.

Here the people also need to apply themselves, they need to grow out of dependence upon the government to and take up the challenge personally. It is the people who have the potential to bring in the required vibrancy that can convert Kashmir into the most preferred tourist  and business destination. As they move ahead the government will definitely step in as a facilitator. The youth of Kashmir should venture out to seek new opportunities and create new alliances that help them grow.

There are some who wish to project Kashmir as unsafe and underdeveloped, this is in pursuance of an inimical foreign agenda and is paid propaganda. It is hoped that the victory gained after much sacrifice will not be allowed to be held hostage to petty thoughts and actions. The people should desist from falling into a trap being set by foreign sponsored propagandists to drive in a wedge between them, the security forces and the government. They should, instead put in all effort towards progressive thought and action. The strength of the new found spirit needs to be leveraged to accrue maximum gains. The entire thrust should be towards progress and prosperity.

This is the time for all genuine stakeholders who have the good of Kashmir in mind to join hands in isolating those who have inimical designs. This is the time to be mature and statesmanlike and work towards consolidating the gains accrued as a result of diligent hard work and great sacrifice.  J&K demands constructive contribution and not opportunism. Nothing can be gained by reliving of a traumatised past in a manner that overshadows a bright future. It is time to look ahead and to work for a bright future.

(Simrit Kahlon is an academician and a columnist)