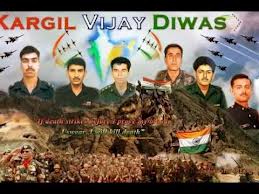 The Fifteenth Anniversary of India’s victory in the Kargil War was celebrated across India with due grace and solemnity. The celebration organised were quite a departure from the previous years when the UPA government, for reasons best known to it, made a conscious attempt to downplay the victory.

In Banglore prominent personalities like Shri Rajeev Chandrasekhar, Member of Parliament, Rajya Sabha, took special pains to organise a tribute paying ceremony at the War Memorial. This trend was seen across the country.

Wreaths were laid at the Amar Jawan Jyoti, India Gate, New Delhi,by Defence Minister Arun Jaitley and the three service Chiefs in memory of the brave sons of the soil who gave their lives to uphold the honour of the Nation.

The most nostalgic tribute, by far, was paid on location in Kargil and Dras where families of the brave hearts congregated in great numbers to relive the courage and bravery of their sons. The main event was held at the war memorial in Dras from where no visitor can come back without moist eyes.

The entire celebration was covered extensively by the media especially the electronic media. One wonders as to why the print and the radio medium were reticent this time round.

On the occasion there were some fiery debates on television on the state of the Indian Armed Forces. The debates have brought forth a single conclusion – the state of affairs with regard to military hardware, operational preparedness and over all morale of the forces is not anywhere near a desirable level. The government needs to initiate urgent, immediate, bold action to set things right as it has promised to do.

The retired fraternity of the armed forces also needs to get some dignity into their debates. Soldiers are not beggars, if they have a demand they should depend upon logic and not emotion to put it across. The constant haranguing against the establishment takes the focus away from the core issue at hand.

With the big day over it is time now to get down to serious work in implement what has been discussed over the last few days and not wait for the next Kargil Vijay Divas to come by and restart only the discussion process.