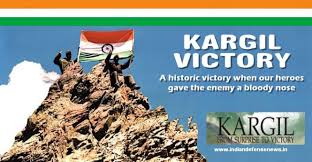 India is a country that expects too much after giving too little to its soldiers. Against the backdrop of less than modest financial emoluments to soldiers, consistent diminishing of their status and acute equipment shortages the Armed Forces are somehow mulling along to keep their honour and that of their country intact.

Under such saddening circumstances even the smallest gesture makes the soldiers happy and gives them a reason, however small and ineffectual, to carry on.

Against this backdrop, the tremendous national response to the Kargil Vijay Diwas on July, 26, came as a silver lining in the cloud of despondency. It was on this day (July, 26) eighteen years ago that the Indian army eliminated illegal Pakistani incursions onto Indian soil in the Kargil sector. The war that saw 500 brave Indian soldiers giving their lives for the sake of the nation had an epic dimension. Such a war has never been heard of in the annals of military history and is unlikely to be witnessed ever again.

Earlier, the celebrations were spearheaded by the Army, but this year, many groups, organisations and institutions took initiative to take the commemoration to a different level altogether. The organisers incorporated Army units, army veterans and the kin of the fallen heroes of the war in the functions held to honour India’s victory.

Prime Minister Narendra Modi took to Twitter to say, “Remembering our brave soldiers who fought gallantly for the pride of our nation & the security of our citizens during the Kargil War.” Many political leaders followed his example and expressed their feelings on social media while also attending commemoration events.

For the first time ever, a commemoration service was held in the Jawaharlal Nehru University campus. The function was jointly organised by the Vidya Veerta Abhiyan, an initiative of the Ministry of Human Resource Development and Veterans India. The guest list included Union Petroleum Minister Dharmendra Pradhan, General (Retired) V.K. Singh and cricketer Gautam Gambhir among others. As many as 23 families of fallen heroes of the Kargil War joined the event.

India Gate emerged as a important destination for those who wished to remember their national heroes. A Parakram Rally was held at the venue on Sunday, July, 23 and thereon every day witnessed some activity or the other. On the victory day (July, 26) the traditional Wreath Laying Ceremony was held over there with the Union Defence Minister and the three service chiefs in attendance. It was followed by a string of functions organised by civilians throughout the day.

Almost all actors took to social media to express their feelings. The flavour came from the wards of defence personnel who work the film industry like Preity Zinta, Celina Jaitlay, Rannvijay Singh and others who wrote about their excellent experiences in army life along with paying respects to the brave hearts who won such a heroic victory for their country.

Movies on the war have been shown in many places across the country and veterans have been invited to speak to gatherings organised to relive the courage and valour of the Indian soldiers.

Schools in particular held innovative functions with many competitions to instil a feeling of pride among the children. A function that merits special mention was held at the war memorial in Bengaluru. It had school children dressed as army men carrying toy rifles in their hands along with candles.

The traditional commemorative functions that the Army conducts every year, especially so, at the Kargil War Memorial in Dras, were held alongside with customary fervour.

In Dras, many events were conducted in the run up to the main functions on 25 and 26 July. On 26, July, all ranks of the Indian Army led by Lt General D. Anbu, General Officer Commanding-in-Chief, Northern Command, martyrs’ families, war heroes, political representatives and the civil administration participated in a commemorative wreath laying ceremony at the Kargil War Memorial in Dras.

On the solemn occasion the Army Commander, Lt General D. Anbu, assured the nation that never again would there be a recurrence of a Kargil like situation. Such confidence exuded by our great soldiers is inspiring indeed.

War memorials across the country witnessed Wreath Laying Ceremonies with innovative functions in which civilians participated most actively.

As usual, some elements decried the enthusiasm of the people as nationalistic jingoism. A request by the Vice Chancellor of Jawaharlal Nehru University (JNU) to place a tank in premises of the University was subjected to considerable criticism and ridicule by the liberal lobby as was the decision to hold a commemorative service in the university premises.

It would be difficult to find fault in the absolutely appropriate request. Placing awe inspiring military hardware in public places is a practice being followed the world over. Within the premises of an education institute it would undeniably act as a source of inspiration. For JNU it is all the more appropriate since the institute is responsible for the education of Army Officers under training. To criticise for the sake of criticising is not a very good thing to do, especially when the subject deals with national honour.

As India marches towards her historic destiny as a leading civilisation of the world it will face many challenges like the Kargil War. They may not be in the military domain but would be equally lethal. The spirit of patriotism that has been displayed in commemoration of the Kargil Vijay Diwas this year will play a major role in overcoming the testing times.

This is also an apt occasion to rise above petty egos and blinkered viewpoints and look at the national cause in its entirety. The Nation should take a vow to never let its soldiers remain wanting for anything whatsoever.

(Jaibans Singh is a reputed security expert and columnist)