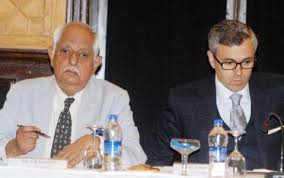 Satinder K Lambah, a career diplomat, has been Indian High Commissioner to Pakistan. Since his superannuation, he has been actively involved as Indian interlocutor for Pakistan and Afghanistan. Since 2005, he has been special envoy to Afghanistan and Pakistan from the office of the Prime Minister of India.

On May, 13, 2014, just a few days prior to the counting of votes for the recently held Lok Sabha polls, Satinder Lambah spoke at Kashmir University about Track-II efforts in search for a possible solution for the Kashmir issue. While admitting that India’s position on Jammu and Kashmir is legally, politically and historically correct, he listed seven points that could give a “possible outline” for a “solution to the problem.”

The seven points are – no redrawing of borders; free movement on both sides of the line of control; removal of tariff and non-tariff barriers on locally produced goods; minimum military presence on both sides; self governance for internal management and respect for human rights including reintegration of militants in society.

The concept of “no redrawing of borders” does not stand logical, ethical and moral scrutiny when large territories of the Indian state of Jammu and Kashmir are under illegal occupation of Pakistan and China. This matter gains criticality when viewed in the context of the gross colonisation, exploitation and human rights violation perpetrated on these occupied territories by successive Pakistani regimes. Whosoever may occupy the seat of power in Pakistan, a democratic government or a dictatorship, one thing that remains common is exploitation of the people and natural resources of Pakistan Occupied Kashmir and Gilgit-Baltistan! It should not be forgotten that the hapless people of these regions who are suffering untold atrocities in the hands of the Pakistani state are Indian citizens whom the country is obligated to protect.

The Indian parliament on February, 22, 1994, passed a resolution that the state of Jammu and Kashmir has been, is and shall be an integral part of India and any attempts to separate it from the rest of the country will be resisted by all necessary means. The resolution reiterates that India has the will and the capacity to firmly counter all designs against its unity, sovereignty and territorial integrity. The resolution also demands that Pakistan vacate the areas of the Indian State of Jammu and Kashmir which have been occupied through aggression and all attempts to interfere in the internal affairs of the country be countered resolutely. Against this backdrop, there can be no question of redrawing of borders or making them “irrelevant.”

The issue of opening the regions to trade holds merit but there are a number of road blocks in this regard. The entry points that have been created in Jammu and Kashmir for facilitation of cross border trade have witnessed poor response as has the bus service for movement of people on both sides. This is because of a strict control regime in Pakistan, wherein, successive governments have blocked accretion of trade relationship with India. Pakistan has not extended to India the reciprocal Most Favoured Nation status in trade even two decades after India unilaterally extended the facility to the country. The trading points in Jammu and Kashmir have witnessed several attempts to smuggle drugs into the state which is already facing a serious substance abuse problem. Under the circumstances, removal of tariff and non-tariff barriers on local produced goods holds no value.

Ensuring an end to hostility, violence and terrorism also relates only to Pakistan since it is from that country that terrorism is being exported to India, especially the Kashmir valley. Security threshold in Jammu and Kashmir cannot be reduced in view of the terrible onslaught of violence that is taking place regularly from across the border. The need of the hour is not conciliatory noises but a tough no holds barred stand where Pakistan is punished appropriately for its malevolence. Each violation along the line of control needs to be deemed as an “act of war” the dealt with as such.

Self governance is yet another aspect that requires a positive response from Pakistan. The state of Jammu and Kashmir, minus the territories in forcible occupation of Pakistan and China, enjoys a democratic dispensation and freedom with all rights and liberties comparable to the best in the modern world. It is the territories occupied by Pakistan and China that are oppressed. When there is talk of self governance it is the responsibility of the Pakistan government to extend democracy and freedom to the occupied territories that should be stressed upon and not the other way round.

Reintegration into mainstream society of such youth who were misguided into the path of terrorism and taken across the line of control is a noble concept that the Indian authorities have been attempting to pursue. There is in place a surrender and rehabilitation policy but, once again, obduracy on the part of Pakistan is coming in the way of its implementation. The Pakistani establishment is wary of being exposed in case the indoctrinated persons get back to Jammu and Kashmir. It is, therefore, creating road blocks in the process.

Satinder Lambah has not addressed the Kashmir University any time before in his chequered career; so why at a stage when the Indian government is in a transitional mode? A possible reason could be the need to put the Track-II efforts into perspective with the objective of taking them forward with the new government.

Satinder Lambah has himself acknowledged that India’s position on Jammu and Kashmir is legally, politically and historically correct; in such a scenario what reason can be given to indulge in any form of compromise? The “solutions” put forth do not reflect a deep knowledge of either the history of the region or the current situation. Fault lines that would make the proposals untenable are quite visible.The new government would be well advised to revisit the Track-II and other diplomatic efforts to address the Kashmir issue with Pakistan. In case a forward movement is required it should be based on proposals that are justifiable, righteous and honourable.