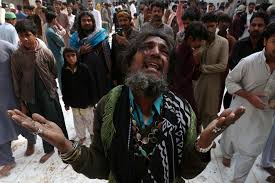 What goes around; comes around!! The proverb implies that the result of things that one has done will someday have an effect on them for having started the cycle.

This proverb describes, most aptly, the fragile situation presently prevalent in Pakistan. Having given wind to the cult of terrorism, the nation is now paying a terrible cost for its misdeeds. The country has witnessed ten terrorist attacks in quick succession since mid- February, which have left more than 150 innocent people dead and many injured.

The deadliest among these was the blast in the Sufi shrine of Lal Shahbaz Qalandar in Sehwan, Balochistan that left 88 persons dead. The twin blasts in Lahore came at the heels of the Sehwan massacre at a time the country was still coming to terms with the carnage. The events have shaken the entire nation to the core.

The suicide bombing at Lal Shahbaz Qalandar was not the first of its kind. Earlier, similar blasts have targeted the two prime Sufi shrines in Pakistan—the Dargah of Data Ganj Baksh Hijweri and Hazrat Shah Noorani.

Both organisations are affiliated with the philosophy of Wahhabism and are closely connected by their shared objective of establishing a Caliphate in the historical Khorasan region which also includes Pakistan.

This implies that the most radical interpretation of Islam in the world is now replacing the secularism which the founders of Pakistan held dear to their hearts and which has been diluted to a great extent already.

Ironically, political leaders, military leaders and bureaucracy across the country are vocal in their condemnation of the attacks but none has condemned those radical elements who have openly acknowledged responsibility for the same.  There can be no bigger indicator of the power Wahhabism has gained for itself in the country.

The Pakistan Army which looks upon itself as the prime saviour of the nation has now been compelled to take some action. The newly appointed Army Chief, General Qamar Javed Bajwa, much like his predecessors, has perceived the development more with a law and order perspective than an ideological issue.

Post the Sehwan massacre, security forces spearheaded by the Pakistan Army went into pro-active mode and reportedly killed about 300 “militants.” The question that arises is – why did they wait for the massacre to happen before cracking down? There are also doubts about the claim because, as usual, the operation has remained absolutely opaque. Nobody knows the identity of those killed and no arrested personnel have been brought in for interrogation and trial.

Immediately after the crackdown, General Bajwa launched Operation Radd-ul-Fasaad (elimination of discord or violence) whose objective is to eliminate the “residual/latent threat of terrorism” and consolidate the gains made in other military operations. It seeks to ‘further ensure’ the security of Pakistan’s borders.

The underlying intention is to give an impression that the General Raheel Sharif launched Operation Zarb-e-Azb has been successful in breaking the back of militancy in Pakistan and now the required “mopping up” will be carried out under the new operation launched by the new chief.

Pakistan Army’s policy of, “you scratch my back, I scratch your!! Whatever happens, do not let the “establishment” down,” becomes quite evident here. This unity is the reason for it being the master of the country despite the so-called democratic credentials that are quite a sham.

The fact is that Operation Zarb-e-Azb, originally aimed at flushing out from North Waziristan militants of the TTP and other groups like Islamic movement of Uzbekistan, East Turkestan Islamic Movement, Haqqani Network etc, was an unmitigated disaster. It led to the death on many thousands of innocent people and the displacement of millions who are limping back to destroyed homes and shattered lives.

The militants whom the operation was designed to target, especially the leadership, had been tipped off by some within the Pakistan Army itself long before the operation commenced and they had left the area. It is because of this reason that not many details of militants killed during the operation, duly supported with pictures and dead bodies has been made available by the army.

The only achievement of the ill fated operation was that it succeeded, however partially, in reinstating Pakistan’s image from ‘terror sponsor’ to an important ally in the eyes of the international community and the US in fighting terrorism.

Quite predictably, Operation Radd-ul-Fasaad has received full support from the Pakistani politicians, defence and civil sectors; can the Chief of the Pakistan Army ever do anything wrong?

Whatever the politicians in Pakistan may say and the Pakistan Army may do, the fact remains that the people of Pakistan are paying a heavy price for the ill conceived policies of their collective leadership (politicians and army) of allowing sectarianism (Wahabism) to take wings in the country. The Jihad that was perpetrated against Kashmir and Afghanistan has now turned back as a Frankenstein monster to plague the country.

The end result of the misconceived and self destructive policy that Pakistan has followed over the last few decades is that its core fabric of being an enlightened civilisation built and nurtured for millenniums has been torn to shreds and an alien philosophy (Wahabism) has taken roots.

All is not lost even now, if Pakistan would attempt to deviate from defining terrorists as “good and bad,” and break the foreign ideology to get back to its civilisational roots, things can take a turn for the better.

If however Pakistan keeps jumping from one  Zarb-e-Azb to another Radd-ul-Fasaad, its destruction is inevitable.

(Dr. Simrit Kahlon is a Chandigarh based academician and columnist)