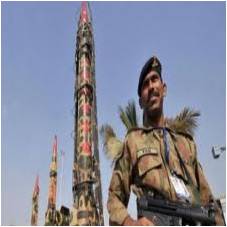 Going through Pakistani newspapers is a painful experience. Loot, rape, bomb blasts, militant actions and such like disturbing activities are covered under a thin sheen of lies and deceit. The newspapers talk of governance where there is none, development where there is none, tall claims of the Army’s victories against militants where there are none and worst of all, they give open coverage to public discourses by Islamists fundamentalists like Hafiz Saeed who are proclaimed international offenders. They gleefully carry the venom spouted by these fanatics who have no qualms in instigating their people into following a misinterpreted and violent version of Islam and the Sharia.

A Pakistani newspaper, “Pakistan Observer” has recently carried an article titled “Indiscipline in the Indian Army” by Air Marshal (Retired) Ayaz Ahmed Khan. The worthy Air Marshal supports illusions of being a great intellectual and an articulate writer. An earlier article by him titled “Fighting terror with greater effect”, carried in a website, www.opfblog.com, on March, 18, 2008, elicited the following response from a reader called Jafridi, “Your article “Fighting Terror with Greater effect” was a crass disappointment, most of the article was almost a straight uplift from the MQ-9 brochure of General Atomics Aeronautical Systems”. This comment puts paid to the wisdom of the commentator and his capability of independent analysis. On the personal front he enjoys an ignominious reputation, having been arrested on the complaint of his former son-in-law Tahir Yameen Sati for issuing a bogus cheque of Pakistani Rs 100,000 and also for abducting his own daughter.

Coming back to the article on the Indian Army, the least that one would expect form a person of the Air Marshal’s age and experience is that the end result of his analysis would be professional and convincing. Unfortunately for him, what he has written supports the inherent strength and ethos of the Indian army. He has listed about twelve officers of the Indian Army who have been charged with misdemeanors and corruption over the last five plus years and has acknowledged that they have all been severely punished. Corruption is deemed to be part of the human nature and since times immemorial people have been known to succumb to this malaise. The best way to control it is to be ever vigilant and not shy away from punishing defaulters, an action which would serve as a deterrent for the future.

The article clearly illustrates that the Indian army has not been found wanting in punishing defaulters, sometimes in excess of what is deemed to be justified. The organisation makes no compensation for rank and stature and is completely divorced for the cult of cronyism which other armies, especially in our neighbourhood, seem to excel in. Furthermore, twelve officers under the scanner over five years in an Army that has an officer’s strength of more than 35,000 and a total strength of one million is not an astronomical number which would shake the very roots of the organisation. The internal systems of the Army and the Indian Nation are strong enough to ensure that this minor blemish will be eradicated sooner than later.

The writer has also made some outlandish allegations about human rights violation being committed by the Indian Army in Jammu and Kashmir. One would not like to lend dignity to his insinuations by presenting a counter data, the matter can be put to rest with one simple question. The events in the West Asian and North African Arab world have proved beyond doubt that no occupation force in today’s world can resist the collective will of the people. If the India Army is, in fact, an occupation force and since the collective Pakistani heart bleeds so much for its Kashmiri brethren than why is it that despite unrelenting effort over nearly three decades the country has not been able to motivate the Kashmiri people into rising in one voice against the so called oppressor? The answer is simple – a majority of the people of Jammu and Kashmir, including those from the Valley, have no issues with the troop presence in their region and they have no desire to leave the Indian Union.

It would also be in order to try and fathom the motive behind his penning down trash of this nature. Obviously, the Air Marshal would have difficulty in finding the time from his financial misdemeanors and family abductions to collect so much data. The facts and figures quoted by him are of a type which can be collected and collated only by some professional agency. It can therefore be logically deduced that the inputs have been provided and the article has been written at the behest of someone who wishes to spread false and motivated propaganda against the Indian Army. Pointing a strong finger at the ISI and the Pakistani army would not be wildly off the mark.

At the end, one has two simple messages for the Air Marshal. First, the Indian army is in safe hands, it comprises of happy and motivated soldiers, it has the unstinted support of a billion plus people, it is totally committed to the defence of its nation, it has the greatest respect for civilized, democratic norms and it has no dictatorial aspirations. Yes, it has a few black sheep in its midst, even a few prodigal sons, but it has the capability to deal with them. Second, the Pakistan army is, of course, not corrupt because it is the de facto ruler of the country and it exploits whatever it wishes to exploit at will. When mass loot is possible legitimately where is the need to indulge in minor financial misdemeanors? The Air Marshal and others of his ilk would be well advised to desist from spreading propaganda that may motivate some idiot in the Pakistani Army to launch yet another military misadventure against India which would spell the end of Pakistan.