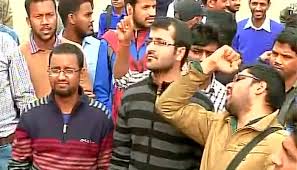 The situation at Jawaharlal Nehru University (JNU) has taken a considerably nasty turn. The nation is engaged in an unnecessary and avoidable debate which is negatively impacting its democratic credentials.

There are many pointers to the involvement of Kashmiri separatist in this incident.  The timing of the incident, coinciding with the death anniversary of Maqbool Bhat and Afzal Guru, and the manner in which it has played out, has the signature of the separatists.

Notice the manner in which the crowd suddenly appeared, raised slogans, caused disruption and disappeared as fast as it came, leaving the students to face the music. Those who study politics in Kashmir would easily identify this as a tried and tested modus operandi of the separatists.

The tone and tenor of the slogans raised is also similar to the one used frequently in the Kashmir Valley.

The motive behind this well orchestrated incident is not hard to find. For the last few years, the separatists have been unsuccessful in generating, in Kashmir, the kind of hype on the death anniversaries of Maqbool Bhat and Afzal Guru that their masters across the border demand.

Prominent thinkers and intellectuals are coming out with a different understanding of the ideology of Maqbool Bhat. It is now being said that he was inclined towards Independence and not merger with Pakistan. The fact that the family of Maqbool Bhat was fighting a political battle in Pakistan Occupied Kashmir (POK) against the repression of Kashmiris settled over there is also being extensively highlighted. Such a thought process is anathema to the separatists and their masters across who have been assiduously nurturing Maqbool Bhat as an icon of their pro-Pakistan ideology.

The life and times of Afzal Guru is also not generating the kind of hype that would benefit the divisive agenda of the separatists.

The media has not being paying much attention to the Bandhs (lockouts) that had been enforced or to the statements being made by separatist leaders during the death anniversary related programmes. While some Kashmir based newspapers cover the functions, they are not being taken up by national media, both print and electronic.

The people of Kashmir, fed up with the constant disruption of their lives by such activities, prefer to distance themselves from the same. On the day of the Bandh they prefer to enjoy the forced break rather than indulge in any political activity associated with the separatists.

The dying legacy of Maqbool Bhat and Afzal Guru as also the falling credibility of their movement would definitely have motivated the separatists to think of some innovative methods to bounce back. Upgrading the narrative from the Kashmir Valley to the national capital would have come across as a logical option.

Having decided upon such a course of action the separatists seem to have planned it with the precision that they have developed over years of experience. Delhi is the home to a huge representation of insurgents, right wing, left wing and so-called revolutionary elements. Such are the demands of a tolerant democracy. The separatists have also built on their representation in the National Capital Region over time in education institutions, business and a host of other places. Some living in Delhi would be fully occupied with pushing of the separatist agenda with various embassies and foreign sponsored non-government organisations operating over there.

JNU has for long been a centre for so-called revolutionary activity in the name of intellectualism. The separatists would not have taken long to home in on the campus as the most apt place to carry out their diabolic plan. The students of JNU would have been carefully nurtured over time. They would have been motivated with ideological disinformation and possibly some monetary incentives.

With the plan in place, the available strength in Delhi would have been built up with professional agitators from the valley.

What happened is there for all to see. The video footage indicates that the show was taken over by a select few who did the job assigned to them and disappeared as fast as they came, leaving the students to face the music.

The second incident at the Press Club involving SAR Geelani would have been worked out as Plan-B.  An alternative, in case the original project at the JNU campus did not work out as desired.

It has, sadly, so happened that both plans have reaped positive results for the perpetrators. The Indian media and political class have played into the hands of the perpetrators of this evil and immoral agenda.

The media went overboard in its coverage and political spokespersons overtook the media with jingoist statements and sensationalist posturing. The police carried out a series of arrests and detentions in a tearing hurry. And thus the juggernaut rolled!

The foregoing narrative is a speculation, of course, but it can be safely assumed that the flow of foreign funding into the Kashmir Valley has been assured for the next year or so because of this one incident.

It is time now to get into damage control mode. The first and foremost step should be assuaging high strung emotions and restoring sanity into the system.

There is no doubt that sedition should be firmly dealt with. A start should be made from the Kashmir Valley where the separatists have been indulging in seditious activities under successive governments and yet are moving around scot free.

The next step should be to ensure that students and scholars do not shape their perceptions on the basis of misinformation and are not allowed to fall prey to propaganda. It would be worthwhile to find out if students like Kanhaiya Kumar or Draupadi Ghosh have even visited Jammu and Kashmir, especially the Kashmir Valley, and if so, under whose sponsorship!

What has happened could have been pre-empted and stalled! Now that it has happened, it needs to be handled with maturity, especially by the political class and the media