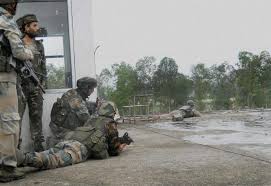 The terrorist attack at Kathua, Jammu and Kashmir, on March, 19, has left in its wake four innocent dead, four destroyed families and lots of pain and suffering. The death of the two terrorists was inevitable and is inconsequential. In view of their the unholy path that they had chosen they are better off dead than alive, human lives wasted in pursuit of a warped ideology.

Serious analysts were waiting for this incident to happen; they knew that the terror mongers across the border would, sooner than later, react to the successful formation of government in Jammu and Kashmir after a successful election.

Sadly, the new Chief Minister of Jammu and Kashmir, Mufti Mohammad Sayeed, did not read the writing on the wall. Totally immersed in his own beliefs, he refused to understand the difference in his previous stature as an opposition leader and the present one as head of a duly elected government.

The unwarranted statements that Sayeed has been making since taking over his new job and the act of releasing an important political prisoner probably hastened the terror hand. Before saying what he wanted to say he should have, at least, taken control of the security situation and issued a general advisory of maintaining extra vigilance. Instead, he spread a feeling of complacency by giving an impression that, under his watch, Pakistan is likely to become a friend for life.

The terror attack has once again laid focus on the security situation in Jammu and Kashmir. It is enough for India to know that proliferation of terror from across the border is nowhere near stopping. Whether it is the handiwork of state, non-state, civilian, Inter Services Intelligence (ISI) Pakistan army, drug mafia, fundamentalist Wahabi/Salafi elements or anybody else is a secondary issue. What is primary and most relevant is that the threat very much alive and the capacity to fructify the same is as potent as ever.

Once this point is understood then the corrective and retaliatory measures that need to be put in place become quite clear. First, the need for constant and enhanced vigilance across the state starting from the border itself is self evident. Second, there is no scope for disturbing the security paradigm in the state, therefore, enabling legislations like the Public Security Act, The Disturbed area Act and the Armed forces Special Powers Act cannot be tampered with. The security forces need to be given all possible freedom and facility in performance of their very difficult task. Third, those who are a party in this evil machination emanating from across the border have to be exposed with concrete evidence to the international community.

All methods – diplomatic, political overt, covert etc. need to be used effectively to break the will of the identified terror mongers. A message needs to go out to the terrorist being prepared for infiltration that they are mere pawns in the larger agenda of self serving and evil megalomaniacs and that they are being pushed towards certain death for no worthwhile reason.

What Sayeed has said post the terror attack also does not elicit the much needed confidence; he has stated that terror is “Un-Islamic.” Whoever said that it was Islamic or religion based? The stated Indian policy is that “terror has no religion.” Sayeed went on to give a hypothetical assessment that this was the work of “non-state actors.”

One would like to remind the Chief Minister that those termed as non-state actors in Pakistan have a definite name and nomenclature in India. They are “terrorist and fundamentalist Jihadi forces” bent upon creating havoc first in the state that he has been mandated to govern – Jammu and Kashmir and onwards in the rest of India. These forces are controlled by religious fundamentalist’s leaders like Hafiz Saeed and Maluana Masood Azar, who are internationally wanted criminals. The state of Pakistan that the CM Sayeed is so very eager to open a dialogue with is allowing these internationally wanted criminals a free run against all norms.

A foreign sponsored terror attack whether it takes place in Jammu and Kashmir or anywhere else in India is an act of aggression against the country. It does not behove for the Chief Minister of a state to comment upon it before the Prime Minister or his representative in the government has given a statement. It is surprising the Chief Minister Mufti Mohammad Sayeed, despite his vast political experience, approached a very sensitive issue in such a casual manner. Is he privy to some intelligence reports prepared by central intelligence agencies that have expressed the possibility of the attack being a handiwork of Pakistan based “Non-state actors?”  Intelligence agencies have, as yet, not given any such assessment; the Union Home Ministry has not issued any statement on these lines, so how has Sayeed made such a casual remark?

Condemnation of the attack by CM Sayeed and his assurances of quick relief to the affected families are welcome developments. One would look forward to his visiting the families of those who have lost their lives in this mindless violence and sharing their grief. One would also look forward to a detailed report on the incident coming from the state intelligence and police agencies.

Indian has been, off and on, talking to Pakistan for decades now. If something was to come out of this exercise it would have by now. Many in India feel that it is an exercise in futility that necessitated more for international sensitivities. There is no harm in indulging in this fatuous rhetoric but it should not divert attention from the main agenda of keeping the country safe from misadventures emanating from across the border. The Indian state is responsible for the security of all Indian nationals and it has to do everything in its power to ensure the same. This responsibility extends to the new State Government of Jammu and Kashmir also.