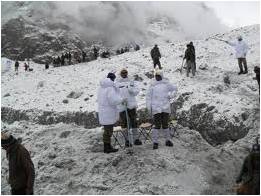 General Kayani, on a visit to Skardu to oversee the relief and rescue work being conducted in the wake of the avalanche in Pakistan Occupied Siachen, advocated the withdrawal of forces from the glacier by both India and Pakistan. The good General, much concerned about the plight of the poor masses of the two countries, opined that this would help cut down defence expenditure of the two countries; very touching, his recently developed interest in economic development and environmental preservation. Needless to say, the statement received ample media attention, as it was meant to. Senator McCain from the United States of America exposed the emptiness of the statement by saying that, despite the Generals sudden change of heart, the fact remains that the Pakistan Army’s best troops and best equipment continue to be deployed against India on the Indo-Pakistan border and not against the Taliban on the Afghanistan border, so much for political gimmickry.

The reality is that the Pakistan army and ISI are inextricably linked with the activities of the Taliban and other fundamentalist groups that are operating with impunity from Pakistani soil. They cannot and will not counter the latter’s nefarious agenda. The Taliban, in the meanwhile, has sympathisers within the radical and terrorist organisations in Pakistan, the chief amongst these being the Lashkar-e-Toiba whose leader, Hafiz Saeed, is amongst the most wanted in the world with a bounty of $ 10 million on his head declared by the American Government. Hafiz Saeed’s brother-in-law, Makki, is known to be very close to the top functionaries of Al-Qaeeda, particularly Mullah Omar. He has, probably, functioned as a courier between the Taliban and Osama bin Laden.

With the NATO forces set to withdraw from

Afghanistan by 2014 and ready to hand over power jointly to Karzai and the “good” Taliban, it does not require an Einstein to figure out the imminent chaos that Afghanistan is likely to dissolve into. The involvement of the Taliban in the government that takes over from the NATO forces is an eventuality that suits the interests of Pakistan, for that would automatically reduce the influence that India is likely to wield in Afghanistan should Hamid Karzai remain the sole power to reckon with. That, in fact, is the prime reason for Pakistan offering tacit and at times overt support to the Taliban in Afghanistan. The s most recent example is the strikes in Kabul against NATO forces and the subsequent attack on a Pakistani prison to release prisoners being held there, including one on death row. Once the NATO forces are no longer the focus of reprisal for the Afghan Taliban, the negative energies of this Frankenstein’s monster, created by Pakistan, will have to be redirected in another direction so as to ensure that it does not self-destruct. In the situation, what better a target than Kashmir?

Evidence of involvement of Afghan Taliban in Kashmir already exists. The possibility of its renewal gains strength from the visible proximity of groups already involved in the spread of terror against India, including the dreaded Lashkar-e-Toiba. Hafiz Saeed, despite his obvious involvement in the Mumbai terror attacks, resides as a free man in Pakistan and has even gone so far as to cock a finger at the mighty United States of America. Moreover, the chief mediator between the Taliban and the NATO forces, who is likely to play a vital role in the region after the withdrawal of the NATO forces, is the Egyptian born and Doha based Yusuf al Qawadri who has, earlier, publicly supported Jihad in Kashmir. The interests of Kashmir and India have never been a concern for the United States, so why would this facet of Qawadri’s personality deter the country from negotiating and perhaps even allying with him, so long as its own ends are fulfilled? What more proof does anyone need of the likely involvement of the Taliban in Kashmir in the near future? Kayani is simply buying time to put in place his revised policy for Kashmir and talk of demilitarisation is nothing more than media hype.

In the meanwhile, the hard work being put in by Omar Abdullah, Chief Minister of Jammu and Kashmir to ensure that the army is removed from the state adds another dimension to the whole security scenario. With the honourable Union Minister for Home Affairs, P Chidambram also keen to fall in line with Omar Abdullah’s vision for Kashmir, we have in hand a formidable duo. Since the removal of the security forces is seen as the panacea to all ills that plague Jammu and Kashmir (as advocated by the Chief Minister at the recently concluded Chief Minister’s conference) be these economic, social or political in nature it is only to be hoped that the State Police Force has improved enough to deal with the imminent onslaught of the Taliban in Kashmir over and above its routine functions..

So what if the Afghan Taliban is a force that even the highly efficient NATO forces have miserably failed to subdue? No doubt, the J&K police force is blessed with super powers which will provide to it the capability to not only police the state but also ensure that there is no terrorist infiltration from across the border. So what if the J&K police has largely been a passive force for the last almost two decades? Doubtless, the Chief Minister has a magic potion that will propel them into superlative action at top speed. Is it not said that fools rush in where angels fear to tread? This being the situation one can only pray for the fate of Kashmir and Kashmiris and ask the Almighty to deliver the land from the hands of such enlightened leaders.