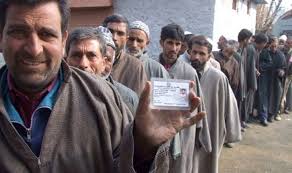 Panchayat polls in Jammu and Kashmir have culminated successfully! Media has not given much attention to the same except for carrying the official press release before and after every phase. One reason for the lack of media interest was the attention being paid to assembly elections in five states across the country. A bigger reason, however, was the peaceful manner in which the polls were conducted. A single incident of violence would haven been enough to change the discourse with the security forces being hounded for perceived ineptness and the “growing instability in the region” being hotly debated by the multitude of self professed experts. This attitude of the media constitutes the bane of Kashmir where violence is highlighted more than anything else.

It is necessary here to dwell upon the political will and meticulous manner in which the Urban Local Bodies elections followed by the Panchayat elections have been conducted. There was considerable political opposition to the election to which the two mainstream local political parties – the National Conference (NC) and the Peoples Democratic Party (PDP) were complicit. They cited a flimsy reason of opposition to the move to remove Article 35 A from the Constitution as a reason to boycott the polls. Well! The said Article 35 A is very much there and the elections are over, so what have these parties achieved with the petulant posture? One cannot help but carry an impression that they were not willing to expose themselves to a grass roots political test and thus opted to remain out of the fray. It was self serving politics over the interest of the people all the way. The Hurriyat Conference, of course, was expected to put hurdles in the election process all the way and it stood by its reputation of negativity on being considerably boosted by the boycott call of the NC and the PDP.

The resilience with which Governor Satya Pal Malik overcame this opposition and decided to go ahead with the election has won the day for democracy. Today, the election are heralded as a true example of how the democratic process should be conducted and those opposing the same are left with egg on their collective faces.

Providing a safe environment for the elections and then ensuring their conduct without any unsavoury incidents of violence was the biggest challenge faced by the administration. It is here that the security forces operating in the state come up deserving of the highest accolades. Security details were planned to the last detail and complete synergy of effort within the Indian army, state police, paramilitary and intelligence agencies was ensured.  While the Army kept the terrorist and foreign influence threat at bay the Police and paramilitary provided security to the polling venues and also kept paid miscreants at bay. Provision of timely intelligence input considerable helped these forces in doing their job well. Control rooms were established in all the districts across the state to respond promptly to any complaints of violation of the model code of conduct.

The Governor took a personal interest in the security arrangements by holding several review meetings. He went to the extent of obtaining sector-wise assessments of the prevailing security situation and arising challenges and consistently emphasised the crucial importance of maintaining a sustained close watch on the ground situation. His open appreciation of the coordination and synergy between the forces went a long way in building their morale and giving them the confidence to provide a conducive security environment for the elections.

The people soon gained confidence in the ability of the administration to conduct free, fair and secure polls and they came out in large numbers to vote for the candidates. At the end of it all the people had conclusively used their democratic right by recording 74 per cent voting in the nine phases of Panchayat elections.

It is necessary here to understand the massive scale at which the elections have been conducted. Jammu and Kashmir has 35096 Panch Constituencies, 4490 Panchayat Halqas in 316 blocks throughout the state from which about 58 lakh people are eligible to vote for the elections. Jammu recorded 83.5 per cent voter turnout, Ladakh 67.8 per cent and Kashmir 41.3 per cent. in Kashmir, where so much resistance to the polls was witnessed, 46 percent polling was recorded at Bandipura; 38.9 at Baramulla; 38.8 percent at Budgam; 28.8 percent at Anantnag and so on.

This in an impressive turnout by all means and a rejection of the boycott calls by vested political interests. Even the threats of the terrorists did not keep the people away from poling! At the end of it all, democracy prevailed over forces of disruption and divisiveness.

The foreign forces and their local stooges that are attempting to wrest away the state from its historical roots with the Indian Union and democratic norms would be well advised to understand the futility of their efforts and stop their nefarious activities.

Governor Satya Pal Malik has, very rightly, called upon the media to also report such momentous achievements of the state that are the result of a strong, unbreakable bond between the people and the security forces, especially the Indian army which ultimately results in confidence in the administration.

So far so good, but, the proof of the pudding lies in the eating! An honest thrust towards development through the medium of the grass roots institutions now in place will act as a panacea for all problems being faced by the people of the state. Things will definitely improve as the elected representatives go about doing their job with full support of the Union government and the state witnesses a new era of peace and prosperity. One hopes that the window of opportunity that has opened will be utilised optimally to bring about peace and prosperity in the trouble torn state.

(Dr. Simrit Kahlon is an academician and a reputed expert on Kashmir affairs)