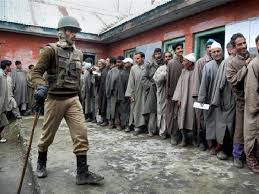 Within days of NDA-3 assuming office, Kashmir has taken centre stage. The situation there came up for discussion in the first meeting called by Home Minister Amit Shah. It has also been stated by the Election Commission that the State Assembly elections over there will be held only on culmination of the Shri Amarnath Yatra, which effectively would mean sometime in August-September at the earliest.  The emerging situation gives to the government a window of opportunity for some out-of-the box thinking about the manner in which the election can be conducted.

Poor voter turnout has plagued the election process for some time now. Threats by terrorists and their supporters in the civil stream is the single big reason behind this malaise.  There is time enough to invoke use of technology to ensure that the voters in Kashmir can vote from home; a process of electronic voting that links the voter ID card to an App can be evolved. Alternatively, mobile voting booths that go house to house to get the voting done without any security risk can be considered. Enough security personnel are available for conduct of such an exercise. The idea is to get the voter to vote, even if he/she opts for NOTA. In fact, the electronic option can also be extended to the occupied territories (Pakistan Occupied Jammu and Kashmir).

It is understandable that the measures will be a deviation from the established process, but then, extraordinary circumstance call for extraordinary measures and Kashmir does fall in the extraordinary category. Elections in the Jammu and Ladakh region can be held in the traditional manner.

Delimitation is a second issue that needs to be considered before the elections are declared.  There are rumours doing the rounds that the issue has been flagged by the state unit of the BJP to Home Minister Amit Shah and that it came up for discussion  in the meeting at the MHA. Even though the government has gone on record to say that it has no intention of going through the delimitation exercise in the short term, the rumour was enough to propel the so-called mainstream leadership of Kashmir into hyper-mode in building the usual doomsday scenario should the exercise be conducted.

The very fact that this segment of Kashmiri leadership, that has long since lost its relevance, is speaking against delimitation so strongly is reason enough for the exercise to be carried out without delay. It is so because these dynastic politicians think of self preservation first and foremost; the good of the people never factors in their scheme of things. If they are against delimitation, it can be taken for granted that the exercise will be disastrous for them and good for the people. NDA-3 should, therefore, move ahead with all guns blazing, while keeping legal sanctity in mind.

The process of delimitation was carried out in J&K in 1995 and the next round was slated for 2005, since it has a ten year cycle. But, in 2002, the ruling National Conference Government froze delimitation until 2026 by amending the Constitution of the State. As things stand now the State Legislative Assembly has 87 seats of which 46 are from Kashmir, 37 from Jammu and four from Ladakh. For the Parliament there are two constituencies in Jammu, three in Kashmir and one in Ladakh.

The state, with the Indian Union, comprises of 101387 Sq. km area. Of this, Kashmir comprises only 16 percent of the land mass whereas Jammu and Ladakh cover a geographical area of 84 percent, the largest portion being Ladakh. Kashmir has on paper approximately 10 percent more population than Jammu, but it is so because Lakhs of voters in Jammu region like the West Pakistan refugees and those belonging to the Valmiki/Gorkha community, who have been living in the state for decades, have not been granted citizenship by successive Kashmir centric governments. Also, Lakhs of Kashmiri Pundits who have their votes registered in Kashmir are no longer living there but in the Jammu region and elsewhere across India. A correct census would take the population figure in Jammu beyond that of Kashmir.

The aforementioned data clearly indicates that the state has an unwarranted concentration of power in one region (Kashmir) and consequent lack of representation of the remainder two regions (Jammu and Ladakh) despite their being more significant in the terms of area as well as population.

The need for early process of delimitation in Jammu and Kashmir, which has been stalled by Kashmir based vested interests through unjustified brute force in the Legislative Assembly, has since long been established. Non-conduct of this very relevant democratic exercise has marginalised the regions of Jammu and Ladakh in a manner that goes against all democratic tenets.

Be that as it may, all decisions on Kashmir will need to be taken with due caution and deliberation. Media has started building a Demi-God like persona of Amit Shah and has gone into overdrive in an attempt to give some deep interpretation to the first meeting that he has chaired. It is important for the government to break this myth and give out a clear message that the Home Minister will not be running a one man show in Kashmir; he will simply be pursuing the policies laid out by the NDA in its first term and such changes that are agreed upon collectively for implementation during this tenure. For example, NDA-2 had a very clear and potent policy of zero-tolerance to terrorism and giving a free hand to security forces to deal with these criminal and anti-national elements. The policy has accrued very good results over the last year and a half. The new Home Minister simply has to keep the momentum going. He will not single-handedly sweep all terrorists in the River Jhelum, as the media would like to suggest. Such rhetoric is not something that the government should encourage since it will unnecessarily create distrust and adversely affect the process of normalcy, which is so important for the conduct of successful elections in the state.

(Jaibans Singh is a reputed expert on J&K Geo-politics)