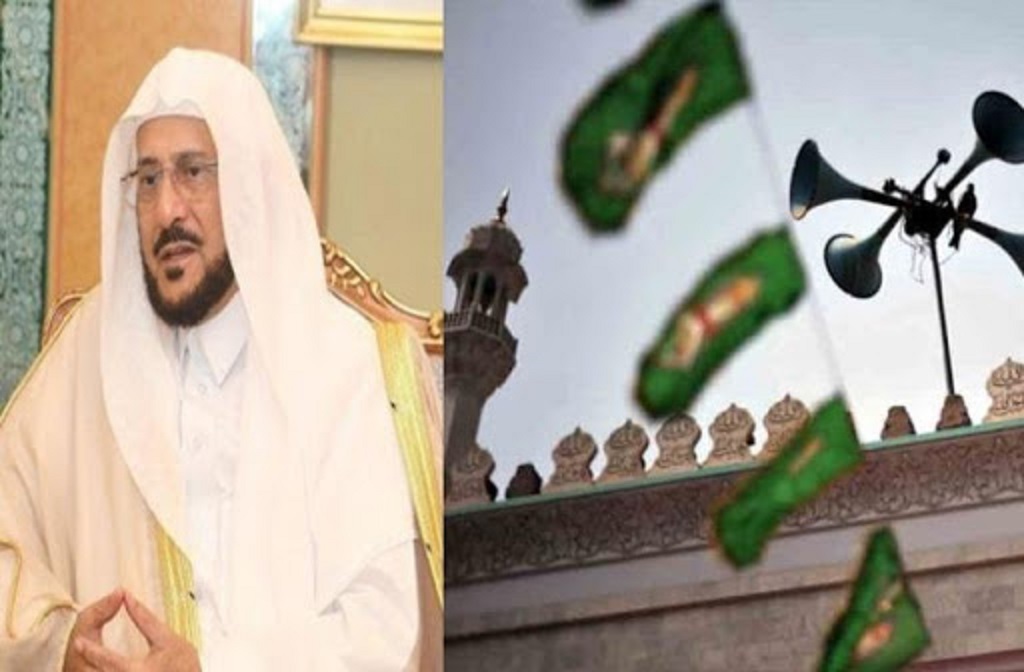 The Saudi Arabia’s Ministry of Islamic Affairs has, in a landmark directive, told Mosques to limit the use of loudspeakers for religious discourses. A circular has been issued by Abdul Latif Al Sheikh, Saudi Minister of Islamic Affairs allowing the use of loudspeakers only for Azan (call for prayer) and Iqamat (second call for prayer). Furthermore, the volume must not exceed one-third of the full volume of the loudspeakers. The circular is based on a Hadith of Prophet Mohammed (PBUH), “Lo! every one of you is calling his Lord quietly. One should not trouble the other and one should not raise the voice in recitation or in prayer over the voice of the other.”

The ministry clarified that communicating the Imam’s voice in prayer is specific to those inside the Mosque, and there is no legitimate need to convey it to those in the home, “In addition to the fact that reading the Quran on external amplifiers is disrespectful to the Quran when it is recited loudly using external loudspeakers, while no one is listening to and pondering on its verses,” said to the circular. The ministry has also observed that external amplifiers and loudspeakers used for anything other than the Azan harms patients, old people and children.  Regulatory measures would be taken against anyone who violates this directive.

The Kingdom of Saudi Arabia is the birth place of Prophet Mohammad (PBUH) and the birthplace of Islam, for which reason it is considered to be the “Home of Islam.” The holy cities of Mecca and Medina fall in the Kingdom. The Kingdom also plays a leadership role in the Organisation of Islamic Cooperation (OIC) which gives to it a strong voice in the Muslim world. The forward looking and enlightened decision taken by the Kingdom of Saudi Arabia to limit the use of loudspeakers must find resonance across the Islamic world.

In Kashmir the use of loudspeakers  in Mosques for purposes other than religious necessity has been going on since decades. In the late 1980’s and early 1990’s, when terrorism raised its ugly head in Jammu and Kashmir, especially Kashmir, loud speakers were financed and installed in Mosques by Pakistan.

The move paid excellent dividends; on 4th January 1990, Aftab, a local Urdu newspaper from Kashmir, published a press report issued by Hizb-ul-Mujahideen asking all the Kashmiri Hindus to leave the valley immediately. This was followed by broadcast of vitriolic and threatening communal speeches and messages from Mosques. The messages said, Ralive, Tsaliv ya Galive (either convert to Islam, leave the land or die) and other words to similar effect. This psychological operation was accompanied by targeted killings of Kashmiri Pandits and Sikhs in order to trigger their exodus from the valley. The resultant exit of the Kashmir Pandit community from the Valley as a consequence of these psychological operations is well documented, over 500,000 peace-loving and helpless Hindus and Sikhs were uprooted from their homes leading to the biggest ethnic cleansing witnessed in independent India.

Having achieved this massive success in a short period of time, the terror masters across the border integrated this resource seamlessly into their policy  of weakening India with a thousand cuts. The Hurriyat and the terrorists gave their messages from the Mosques. Crowds were collected, threats issued and diktats given through this medium. Indoctrination was done through spoken material provided by Pakistan and designed to flare up anti-India sentiments.

The preaching of a radical version of Islam to replace the enlightened Sufi culture was resorted to blatantly; it has led to the advent of the Salafi-Wahabi stream of Islam in Kashmir that was earlier unknown in the valley. Lectures from the likes of Hafiz Saeed, Syed Salah-ud-Din, Akbaruddin Owaisi  and Zakir Naik through Mosque loudspeakers are common place. India is incessantly described as a Dar-ul-Harb (land of war) and Dar al-Kufr (land of disbelievers).

This methodology reached a crescendo in the period of massive social disruption that was witnessed from 2008 onwards. Of note here is the anti-India campaign played out on the death of the terrorist Burhan Wani in 2016. Pro-Pakistan and anti-India slogans with fervent appeals and direct incitement to the youths to join “Jihad” and fight against security forces blared from loudspeakers. This became the norm post all killings of terrorists by security forces. The process continues albeit at a limited scale, now that terrorism has been contained to a great measure in the Kashmir valley.

It is notable here that even Pakistan, that speaks so voraciously about the rights of the Kashmir people to use loudspeakers in Mosques, has been attempting to curtail the activity within the country. The Punjab Sound System (Regulation) Ordinance 2015 allows only one speaker for Azan and Friday Arabic sermons only.  Loudspeakers have been removed by the police on several occasions from hundreds of Mosques in big cities like Rawalpindi, Lahore and Islamabad.

In India, “secular” credentials are freely used to continue with use of loudspeakers for broadcast of prayers by all religious institutions, be it Hindu temples, Gurdwaras or Mosques. However the realisation is there about the disrespect that this  practice causes apart from the discomfort and there is a social movement to curtail the same. In a landmark judgement the Allahabad High Court held that the Muezzin could recite ‘Azan’ from minarets of the Mosques by human voice without using any amplifying device. “Azan is certainly an essential and integral part of Islam but use of microphone and loud-speakers is not an essential and an integral part thereof,” said a statement of the Hon’ble Court.

In Kashmir, in particular, the matter gains significance since the use of loudspeakers in religious places poses a serious threat to peace and harmony and also to the safety, security and integrity of the people and the Nation.  There is a strong case to seek motivation from the Saudi Arabia model and curtail the practice to the extent that is permissible now in the “Home of Islam.”