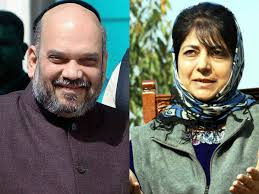 The cat is now out of the bag!! Mehbooba Mufti, is out to derive as much benefit from the Centre as possible before reforming the coalition government with the Bharatiya Janata Party (BJP) in Jammu and Kashmir. She wishes to build her image as a strong leader in the eyes of her constituency in Kashmir and her party cadre before taking on the mantle of chief minister.

In the search for a viable agenda on which to build her posture, she has homed in on her pet bug, the Armed Forces Special Powers Act (AFSPA). It seems that Mehbooba wants to see AFSPA revoked in two districts before she makes a grand entry into the chief minister’s chair.

This line of thinking does not come as a surprise since Mehbooba has, for long, nurtured this preoccupation with AFSPA at the cost of other issues that need urgent attention, mainly development.

Why is Mehbooba not attempting to take a piece of the development cake from the BJP to build her image? Why AFSPA?

The answer is quite simple, even if the Centre agrees to release the development package it will be a long time before its effect is seen on the ground. She is also well aware that no amount of development funds can satisfy the insatiable need of money in the Kashmir Valley. So, in the end, only brickbats will come her way. The revocation of the AFSPA, on the other hand, will give an immediate boost to her stature. She would have achieved what Omar Abdullah could not achieve, and thus, become bigger than him.

We are, therefore, back to playing politics with the security of the state with a revisit to the tedious debate on the status and need of (AFSPA) in Jammu and Kashmir.

AFSPA has a history of being used as a political tool to test political waters. Such an exercise has been carried out many times by the National Conference (NC) and the Congress while they were in power. Omar Abdullah would fall back on the demand for the revocation of AFSPA the moment he felt a little insecure and so did Congress President Saifuddin Soz. It would come across as a good reminder that both indulged in such a debate in May 2013 with elections in mind.

It seems that a similar drama is being played out now, only the actors have changed. However, what Mehbooba must take home as a lesson is that this line of thought did not help either the NC or the Congress.

Mehbooba Mufti should be aware that a decision for revoking the AFSPA would flow from the Cabinet Committee on Security (CCS) only after taking parliament in confidence. Even if the Centre takes cognisance of her demand, which is a remote possibility, it will have to go to parliament to get sanction. No guesses are required as to what would be the result of such a move by the centre.

This is because the enemy may be in a weak position, but he has not given up on the objective of causing disorder, disruption and violence in the state. He will strike back at the slightest opportunity and that too most viciously. The idea, therefore, is not to give him that opportunity.

Does Jammu and Kashmir, after having attained a fair degree of security from terrorism, wish to revisit the terrible times all over again simply for the political ambitions of a few? The answer is a big NO!

One does not doubt the courage and commitment of the state police, but even a cursory look at the organisation indicates that it does not have the strength, equipment and training to conduct law and order and internal security functions simultaneously. The need of the hour, therefore, is for early formation of the state government so that funds can be obtained for restructuring and modernization of the state police force so that it can take on responsibility of internal security.

In case such a situation comes by, there will be no need to even revoke the AFSPA, it will die a natural death!! In the meantime it serves no purpose to give up on a good security situation for short term political gains.

There is a fragile security situation not only in Jammu and Kashmir but also across the nation in the wake of the recent terror attack in Pathankot, those in March 2015 and the arrest of certain persons affiliated to radical organisations like the ISIS! This is definitely not the time when Prime Minister Narendra Modi or his National Security Advisor, Ajit Doval, would be amenable to any suggestion that can cause a security problem. At a time when Pakistan continues with its policy of bleeding India, the state should not be seen as adamant to pursue its agenda which runs against national interests.

The late Mufti Mohammad Sayeed, in March 2015, made a statement, “We will start a gradual process of scrapping of AFSPA.” The response was a terrorist attack on the same day (March 21, 2015) on a police station in Kathua in which seven people, including two security personnel and two terrorists, were killed. The militants followed it up with another attack on an army camp in Samba District the following day. Mufti did not speak of revoking AFSPA after that.

So here is piece of good advice for Mehbooba Mufti! Find some other agenda for gaining political brownie points. Better still, simply take the chair of chief minsiter, thank Allah for having given you such benevolence and start working honestly for the good of the people who have reposed so much faith in your party.

(Jaibans Singh is a security analyst and columnist)