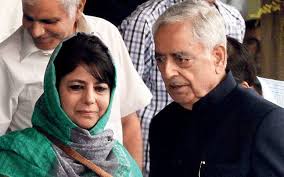 Mehbooba Muti, in her press conference post her resignation as chief minister of Jammu and Kashmir, frequently referred to “Reconciliation” as a prominent agenda of her party . Use of this concept is not new either to Mehbooba or to her party. Her father, Mufti Mohammad Sayeed, during his earlier tenure as chief minister often referred to setting up of a “Truth and Reconciliation Commission.”

In the political domain there are many instances where two nations or antagonists remain in a state of conflict over a protracted period and commit many atrocities on to each other in the course of the same. Reconciliation comes into play when they decide to forget the past and try to move on to a better future. A good example is the need for India and Pakistan to reconcile to the pain of the partition and attempt to set up a new and more civilized relationship.

The PDP and its leadership have often displayed a proclivity to use, in reference to the Kashmir issue, high sounding words that apply mostly to international diplomacy. If there is talk of demilitarisation of the Gaza strip, automatically there is talk of demilitarisation in the Kashmir Valley; if the Korea’s are setting up a truth and reconciliation commission, so must one be set in Kashmir. This is a clever ploy to give an impression that Jammu and Kashmir is not fully a part of India.

When seen in the context of Jammu and Kashmir, concepts like reconciliation are out of sync with reality. Who, for instance, are the people who need to be engaged in the process of reconciliation? With whom does the state need to establish harmonious relations? And most important, where does the threat to harmony emerge from?

The main players in the Kashmir valley are the people, the Indian Union, the security forces, the political machinery, the secessionists and the terrorists. In which direction, one wonders, would this exercise in “Reconciliation” be directed?

Certainly not towards the Union Government for it has never had anything other than peaceful intentions. Nor the security forces which are simply doing the bidding of the government which includes the State government. In fact, security forces have made a commendable contribution to bringing peace back to the State in general and the valley in particular, at a considerable loss of both men and material. Not only that, they are also at the forefront on occurrence of any kind of natural disaster or any other emergency ranging from inclement weather conditions to massive earthquakes. The political segment is as reconciled as it can be in a parliamentary democracy and there seems to be no case in engaging the same in such issues.

The only possibility that remains is the secessionists and the terrorists. Surely, nobody in Jammu and Kashmir would be interested in reconciling with either of the two. Also, they cannot be expected to come out with the truth regarding their involvement in the mayhem that the Valley has suffered for many decades.

The intentions of both the secessionists and the terrorists have been established beyond doubt as being malafide. All they are interested in is disruption of peace harmony and any development that may be taking place in the region. People who are interested in peaceful solutions do not arrive surreptitiously into your homes and hearths armed with explosive devices and guns. Terrorists and militants simply do not have anything even remotely honourable on their minds let alone something as noble as truth and reconciliation and harmony.

Would not even talk of reconciliation with enemies of the state, separatists/disruptive elements and foreign sponsored terrorists be tantamount to being disloyal to all those security personnel and civilians who have lost their lives to this mindless and evil violence? Would it be in order to go ahead and reconcile with those very people who have created mayhem and caused grievous harm to innocent human beings in the region? Would this act not amount to ridiculing the sacrifice of those killed due to unmitigated violence?

It should never be forgotten that Kashmir issue is essentially the product of foreign sponsored attempts to forcibly fracture the unity and integrity of India through the spread of terrorism, disruption and divisiveness in the sensitive frontier state of the country. The Government of India and the people of India have, along with the people of Jammu and Kashmir, fought a valiant battle to thwart the evil designs of the enemy and have obtained great success. When there is absolutely no conflict between the people of Kashmir and the Indian Union, where does this talk of reconciliation come from?

In fact, there is a need to remember, for all times, the evil attempt by Pakistan to dismember the state and the nation and stay ever vigilant for any more such attempts that will most definitely be made in the future too.

Peace is fast emerging as a reality in Kashmir, the segments of terrorism that remain have been effectively contained; what is now important is the necessary amount of vigil that would ensure that terrorism can never raise its ugly head all over again and the era of peace can gain firm roots.

Reconciliation in Jammu and Kashmir is not about politics, it is about coming to terms with the losses suffered, so as to move on in life despite the tragedies, it has, essentially, a humane connotation. Harmony has to be between the communities to pursue a common goal of development. All efforts need to be directed towards the process of rebuilding what has been lost both emotionally and materially, that is what reconciliation and harmony is all about.

If sustainable peace is the dream of all Kashmiri’s then the first step should be abjuring of all attempts to spread hate and misinformation. One cannot deny to all citizens of the country the right to express themselves but, given the sensitivities involved, there is a need to be circumspect in expressing views. Throwing around of words without any thought to the difference in the meaning and the connotation need to be contained.

(Jaibans Singh is a reputed analyst and commentator)