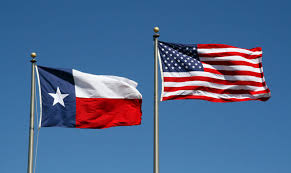 The state of Texas in the United States (US) represents, in letter and spirit, the all American tradition and ethos; big cars, big buildings, large open spaces, happy and courteous people relentlessly pursuing the great American dream.

Few, however, know that Texas was not originally a part of the United States. In the nineteenth century it was under Spanish rule and also a part of Mexico. It existed as independent nation called the Republic of Texas from March 2, 1836, to February 19, 1846 and was annexed by the United States on December 29, 1845. It was admitted to the Union as the 28th state on that day with the transfer of power becoming effective on February, 19, 1846.

When Texas became a state of the American federation it changed its national flag into t a state flag. Even today Texas flies its state flag on a mast that is of the same height as the mast of the Union flag. Texans are aware of their historic nationhood but they no longer pursue the same as a political tool. Their assimilation with the US is complete and irrevocable.

If the people of Texas could, almost two hundred years back, realistically understand and appreciate the benefits of being part of a large democratic union, why are the people of Jammu and Kashmir taking so long to understand a similar reality that is staring at their collective faces?

What exactly is the so-called Azaadi (freedom) that is being sought? The fact that freedom is being demanded in a free country and a free polity indicates the extent of unreasonableness that the demand generates. The demand for Azaadi is the handiwork of those who do not have the good of the people in mind. Sadly, there exist a fair number of such inimical elements both within the state and outside of it.

A big political ruckus has been created about the so-called “special status” of the state as given by redundant legislations like Article 370 and Article 35 A. The legal validity of the legislations is being contested in the court of law and soon a verdict will come by.

It is debatable whether the said legislations favour the people of the state or are constricting them from achieving their full potential. The whole of India is marching forward in pursuit of prosperity and development quite successfully without the support of any special status or Article 370. So what stops the people of Jammu and Kashmir from doing the same?

The special status is nothing more than a tool of a few political and feudal families to control the people of the state without any oversight of the centre. It removes the checks and balances that are so important for any functional democracy.

The third big issue is with the security of the state. Massive propaganda is generated about the imposition of the supposedly draconian Armed Forces Special Powers Act (AFSPA).

AFSPA has been imposed in the state to give legal protection to the troops who are involved in countering foreign sponsored terrorism. It cannot be denied that counter terrorist operations lead to considerable discomfort to the civilians but there exists no other option to challenge the wicked designs of foreign powers. It has to be remembered that blood of the security forces is being shed to give protection to the innocent civilians of the state and this constitutes a much bigger sacrifice than the discomfort being faced.

Jammu and Kashmir shares a porous and active border with an inimical neighbour. Naturally, the quantum of forces deployed over there will be more than in any other region of the country. The difficult terrain demands enhanced logistic support for which a fair amount of military manpower has to be deployed. This simple aspect is conveniently ignored by the self appointed critiques of the security set up who harp on a disproportionate number of security forces operating in the state.

The Jammu region, Ladakh region and remote areas of the Kashmir Valley like Gurez welcome the presence of the Army due to attendant benefits of security and economic well being. This is because the soldiers hire porters and ponies, they purchase goods and perishables for day to day use locally and extend assistance through schemes like Operation Sadbhavna.

The issue of overwhelming military presence is raised only in a few urban districts of Kashmir and that too purely for political reasons.

The frustration among the youth that is heralded as an indicator of anti-India sentiment is the result of monetary incentive and indoctrination. The young boys who are spearheading the agitation lack both maturity and understanding. They are victims of a well planned programming against the Indian state carried out with foreign funding and are giving vent to an emotional upheaval caused by constant exposure to a hate filled environment.

The clampdown on finances due demonetisation and investigations of the National Investigation Agency (NIA) into finances and funding of the Hurriyat leadership has considerably clamped down this immoral activity.

More than 90 percent of the people of the state consider themselves to be Indian so there is, by no means, a popular movement in the direction of Azaadi. The miniscule proponents are blatantly pursuing a personal agenda completely divorced from the popular perception.

The issues that are being raised in Jammu and Kashmir are not insurmountable in nature. In fact, a fair number of them are non-issues being raked up by a select few with vested interests and not in favour of the larger polity.

There is a need for the people to realise that inflicting self injuries is not going to give any positive outcome. It is not beneficial or even possible for them to exist as a small land locked state surrounded by three giants like China, India and Pakistan. Should India retract, China and Pakistan will devour them in no time and subject them to untold misery.

The people should take a leaf from the Texas model and pepper the emotive expression of so-called Azaadi with pragmatism, righteous and justification.