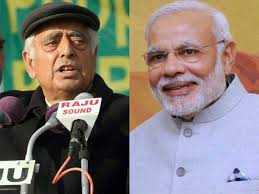 The euphoria of the very successful elections in Jammu and Kashmir has been somewhat dampened by a festering stand-off over the formation of a government. Despite there being so many options the Kashmir-based local political parties are not ready to come forward with a viable solution.

With the situation not showing any sign of a breakthrough it is time to carry out a reality check with utmost honesty.

The reality is that the Jammu region has given a clear mandate to one party – the Bharatiya Janata Party (BJP) while the mandate in the Kashmir valley is divided between three parties – the Peoples Democratic Party (PDP), the National Conference (NC) and the Congress, as also, some smaller segments like Sajjad Lone’s Peoples Conference (PC).

It is quite apparent from the mandate that the people of the Jammu region have, during these elections, exhibited an aspiration for a political identity that is different from the Kashmir region. This is reason enough to ensure that they are adequately represented in the government. The upshot of this thought process is that the BJP, which has convincingly swept the Jammu region, has to be a part of the government, and with it, can align the PDP, the NC and/or Congress along with the smaller entities. Any party that has got a mandate in the Kashmir valley and is willing to take this course of action will exhibit honesty in respecting the mandate and aspiration of the state as a whole.

Sadly, all parties that have won seats in Kashmir have conveniently sidelined the main issues of stability and development and have brought political skeletons out of the closet. Their intention is to drive a hard bargain with the BJP so that maximum benefit can be drawn from it being in power at the centre.

Also to be considered is the fact that coalition partners of the last two governments in the state broke off acrimoniously before the next elections. This has set a tradition of sorts within the Kashmir-based political parties which, in turn, has created a need for leaving some doors open for the blame game in the end.  Therefore, any deal that is made will have some “ifs and buts” that can be exploited at the appropriate time. This scheme of things is in tune with the manner in which politics is played out by the valley leadership.

In carrying out their vested agenda the parties that have won in Kashmir are giving a somewhat warped logic of maintaining the “secular” identity of the state. Even a child can understand that if the Jammu reason does not get its due representation in the government, it would amount to the biggest murder of secularism in the history of mankind. A particular community would be deemed to have used deceit and deviousness to ensure its traditional political domination over the other major community of the state. The sentiment of the Jammu region that has called for an end to the status quo would be brutally brushed aside.

The AFSPA, in any case, cannot be debated upon politically since it has a security threshold that cannot be played around with. The Act can be revoked only when the security situation in the state is totally stable.  This is a national imperative which cannot be compromised.

There is another important aspect that is not being considered in the debate at all – the BJP does not have to be in power in the state to abrogate Article 370. The power for abrogation lies with parliament where the BJP has a clear majority.

The BJP has not abrogated Article 370 after coming to power because it does not wish to do so without the approval of an overwhelming majority of the people of the state.  The party has made public its commitment to have a widespread debate on the subject that would throw up the verdict of the people. It serves no purpose for Kashmir-based political parties to raise this issue again and again only to gain media attention.

Also as regards article 370, the posture taken by the BJP is wholly democratic, while that taken by the some Kashmir-based parties is feudal and authoritarian since their strong position on the statute does not reflect the desire of the Jammu or the Ladakh region, where they have negligible to nil representation.  If what the BJP says cannot be considered to be the voice of the people of Jammu and Kashmir then what the PDP, the NC or the Congress say also cannot be construed to be the voice of the people of the state.

It is time to understand that politics in the state have changed forever. Only such political parties which understand the flow will survive. The people of Jammu and Kashmir, especially Kashmir, are interested only in the future of their children. They have no time for outdated political ideologies.  It is expedient for the Kashmiri leadership to shed its single minded pursuit for power and understand the feelings of the masses. One can only hope that good sense will prevail.