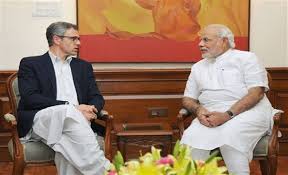 The announcement by the Congress party of not forming an alliance with its coalition partner the National conference (NC) has set the pace for the forthcoming Assembly Elections in Jammu and Kashmir. In order to analyse the electoral situation that is likely to emerge in the poll bound state it is necessary to first see how the numbers are stacked up. The State Legislative Assembly presently constitutes 87 seats of which Jammu holds 37, Kashmir 46 and Ladakh 4. In the present assembly the NC has 28 seats, the Peoples Democratic Party (PDP) has 20, the Congress 17 and the Bhartiya Janata Party (BJP) 11. The remaining seats are with smaller parties and independents who may play a crucial role post the forthcoming elections.

In the election held in 2008, NC maintained its position while the Congress went down by three seats. The PDP fought incumbency to gain five and yet could not form the government. The BJP was a big gainer with 11 seats against not a single one in the previous polls.

First on the discussion board should be the challengers – PDP and BJP. The PDP has been working hard to build its base not only in the valley but also in the Jammu region; Mufti Mohammad Sayeed has in place a dynamic team in the Jammu region which has succeeded in registering a presence of the party over there; whether this will result in votes is something that only time will tell. Mufti Mohammad Sayeed also has the advantage of being seen as close to the BJP which will play a role with the discerning voters of the state. That the PDP has a much stronger presence than the NC in the valley is a given. The three way contest for most seats in the valley between the Congress, NC and PDP will add to the challenge; in case the BJP also steps in things will become all the more interesting.

The resurgent BJP is entering the arena with a “Mission 44” which means getting a majority in the state on its own. The idea may look far-fetched but the party has many reasons to support its optimism. Its good performance in the previous assembly elections, an excellent result in the just culminated parliamentary elections, the Modi wave and being in power in the centre are all in its favour.

There are, however, some serious hiccups; those who were expecting a sea change with Narendra Modi coming in are quite upset by the constant firing along the international border in Ranbir Singh Pura and the inability of the government to address the issue with Pakistan. The more committed state cadre of the party is also looking for some movement on Article 370 which clearly cannot happen so early in the government’s tenure. If BJP President Amit Shah is not vigilant such issues may escalate into “centre’s incumbency” for the party.

Also, the BJP set up in Jammu and Kashmir does not have the expertise or the infrastructure to run the kind of media-cum-political campaign that the party is famous for. How that winning formula will be applied with the laid back and technologically fragile systems that the BJP has in place in the state is a challenge for the newly appointed BJP President.

Both Congress and the NC are now bending backwards to prove that they were the ones who have taken the decision to fight elections alone. Omar Abdullah has stated that he had conveyed the decision to go alone to Congress President Sonia Gandhi before the announcement was officially made by the Congress. It is, however, notable that NC had kept some space available for the Congress as is seen by the first list that it has declared.

Not known to many is the fact that the Congress President had summoned select MLA’s of the party to New Delhi on Sunday, July, 13. Extensive meeting were held first with the Congress President and then with Rahul Gandhi. It can be surmised with reasonable amount of surety that it was then that the final decision was taken by the Congress. It also stands to reason that the MLA’s invited were able to convince the party “high command” about the need to go for polls alone.

The anti-incumbency wave in the state has become quite evident during the Parliamentary elections where both the ruling coalition partners have registered a washout. This has given a psychological advantage to the PDP and the BJP and overwhelmingly led to the decision of the ruling coalition to fight the election without a pre-poll alliance. The Congress is of the belief that the wave is predominantly against the NC and it can improve its prospects by disassociating from its partner. However, the general disenchantment with the Congress across the country may put paid to its efforts to register a comeback unless the party works overtime in the next few months to select winnable candidates and re-establish a “connect with the people.” It can be said with reasonable certainty that a repeat of its sitting candidates will spell doom.

The NC is in doldrums and it is aware of the same; Omar Abdullah has to pay the price for surrounding himself with a coterie of political novices who have managed to isolate him from the people. The NC, however, is a cadre based party and will not go down as badly as is being predicted. Omar Abdullah is bound to put up a brave fight.

Clearly the polls will be fought by all parties with competitive vigour. While the opposition is riding a wave of anti-incumbency and political resurgence the ruling dispensation is not likely to give up without a fight. Add to this the problems that the separatists are bound to create and the sensitive security situation and we have all the makings of a pot boiler. What is most important is that the election be held without undue violence and in a free, fair and transparent manner. Along with the political parties the security forces will have a major role to play.