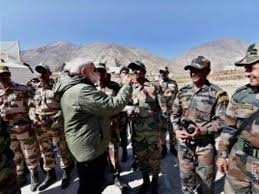 Three significant incidents have taken place in Jammu and Kashmir in recent days. A few days back, security forces avenged the terrorist attack at Sunjwan Army Camp, Jammu, by killing, Mufti Waqas, the master mind of the attack. Waqas is a terrorist of Pakistani origin, affiliated with to the Jaish-e-Mohammad (JeM) that has been designated as a terrorist organisation by the United Nations. He is said to be to be close to Maulana Masood Azar, the founder and leader of the JeM and was infiltrated into India some time in 2017. Apart from the Sunjwan attack, he was also responsible for many more terrorist strikes especially targeting the security forces.

The second incident of significance is the killing of two terrorists and their four accomplices by the Army, when they were travelling by car in Shopian. While the security forces insist that the accomplices were over ground workers, the separatists wish to pass them off as “innocent civilians.” The separatists have launched their tried and tested anti-Army, anti-security forces campaign with “Chalo Shopian” (lets go to Shopian) and Bandh (lockout) calls.

The third incident is the Major Aditya Singh case, wherein, the state government attempted to nail the officer and his soldiers when they were forced to fire, in self defense, at an errant stone pelting crowd leading to the death of three so-called civilians. The Supreme Court has now put on hold the investigation process. In a face saving gesture the state government has given a clarification that the name of Major Aditya Singh did not figure in the FIR at all.

The aforementioned incidents should have provided enough reason to the media to highlight the success being achieved by security forces, especially the Indian Army in fighting terrorism in Jammu and Kashmir, despite the many challenges.

Instead and very sadly, the narrative has been concentrating on the separatist protests and the Supreme Court judgment which is also being subjected to criticism. Consequently, the continuation of the Armed Forces Special Powers Act (AFSPA) in the state is also being questioned.

The Indian Express in its editorial on 7, March, has questioned the wisdom of the Supreme Court judgment in the Major Aditya Singh case. “In this sense, the SC’s stay seems both unnecessary and unfortunate. The petition clearly has purchase among those who seek to conflate an individual soldier’s actions with the interests of the nation….,” says the editorial of the newspaper.

Accountability of a soldier’s action when he is deployed in “restive territory,” (that the Express editorial has also talked of in the editorial) rests on the government that has deployed him there, not on the soldier who is merely obeying orders.

The editorial also speaks of a Supreme Court judgment of July, 2016, in which the Court is said to have criticised AFSPA as “symbolising a failure of the civil administration and the armed forces.” It is respectfully emphasised here that the Armed Forces function under the government and any onus of the so-called failure of the forces also rests on the government that holds all authority.

It is notable that the security forces have not failed in the task given to them! There have been a number of times when the forces have stabilised the security situation in Jammu and Kashmir and provided to the government a platform to launch a political process. It is widely known that successive governments have failed to grasp the opportunity and the situation once again gravitated to criticality. Soldiers are also human beings and very noble ones at that. The nation should pause to reflect as to how they would feel when they see their good work going up in smoke.

The nation should be sensitive to the fatigue that the soldiers feel in facing, over such a long period of time, a situation as tense as the one obtainable in Jammu and Kashmir. For a soldier to see a comrade dying is akin to the death of a close family member; in Jammu and Kashmir it is a regular happening! Should the media and the intelligentsia not show some sensitivity towards the emotions and feelings of the soldier?

So far as discipline of the soldier is concerned, it should not be forgotten that through AFSPA he does get immunity but that does not place him above the law as is commonly said. He is governed by the Army Act which is much more stringent than any civilian law. Justice meted out under the Army Act is swift and punitive. An image conscious organisation like the Indian Army would not allow its rank and file to behave in a manner that does not subscribe to established norms.

The conclusion of a editorial of the Deccan Chronicle of 7, March titled, “Turmoil in J&K: Using Army isn’t the Solution,” aptly summarises the situation by saying, “The Supreme Court was right to say on Monday that the J&K authorities and state police shouldn’t treat Army personnel like “ordinary criminals” and take coercive steps against them. The court is clearly appreciative that the Army is placed in an impossible situation, which terrorists and their sympathisers easily exploit. Only the Centre can now break the pattern.”

The Army man would like nothing more than a leisurely peace posting to the Kashmir valley where he can sit back and enjoy the salubrious climate along with his family members. It is emphasised repeatedly that the Jammu and Kashmir problem can be resolved only by political means, so the politicians and the people should be called upon to do their job first and foremost.