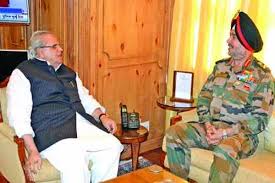 The political and security situation in trouble torn Kashmir is showing some unusual trends, fortunately, for the better. There is a marked reduction in stone pelting incidents and reports suggest a decline in the process of recruitment of local youth into the fold of terrorism.

There is a new trend of terrorists trained in Sniper activity targeting security personnel from a distance.  Inputs suggest that the snipers are trained foreign nationals who are carrying M-4 Carbines. It is believed that two teams have been infiltrated by Pakistan for the purpose. It has led to three casualties of security forces personnel in the past few weeks. The situation, however, is not as critical as it is being made out by the media. M-4 is not exactly a Sniper Rifle, but one that can engage targets from a distance; it is not a potent weapon for sniper activity. One of the two sniper teams infiltrated has been neutralised. It consisted of a Pakistani national, Usman Ibrahim, belonging to the terror outfit, Jaish-e-Muhammad (JeM). Usman Ibrahim is the nephew of Masood Azar, the founder and supreme leader of JeM. Usman’s accomplice, a local named Showkat Ahmed, was also killed in the encounter. The sniper threat has further decreased with the neutralisation of Usman.

A bigger security situation has been created by the dastardly murder on November, 01, of the Bharatiya Janata Party (BJP) leader, Anil Parihar and his brother Ajit, in Kishtwar. The killing immediately raised fear of a revival of terrorism in the area that has remained peaceful for a decade and a half now. There were also apprehensions of communal tensions cropping out. The administration reacted quickly with the imposition of prohibitory orders and curfew. The assistance of the army to contain a potentially explosive situation was also solicited. The Army Commander Northern Command, Lt. Gen. Ranbir Singh, accompanied by other senior offices visited the area and carried out a detailed assessment with the commanders on ground as well as the officers of the civil administration.

There were angry protests immediately after the incident but timely action by the government agencies helped to diffuse the situation. It is to the credit of the locals that the funeral, that was attended by more the ten thousand people, went of peacefully and without incident even though a few anti-Pakistan slogans were raised.

On November, 9, the people of Kishtwar and surrounding areas observed a complete Bandh to protest the killing of the BJP leader and his brother. The call for the Bandh was given by Kishtwar’s Muslim Shoura Committee and Sanatan Dharam Sabha to press the administration and police to find out killers of both the brothers. People of all communities, especially the Hindus and the Muslims participated as one in the Bandh. The solidarity among the communities was complimented by none less than Lt. Gen. Ranbir Singh. While offering condolences to the bereaved families, he lauded the role played by the leaders of the region, elders, local populace and joint efforts of all security forces that helped in maintaining peace in Kishtwar and adjoining areas.
This show of solidarity was a slap on the face of those forces that are attempting to bring about a communal divide in the region and reignite the fires of dissidence and terrorism. The evil foreign sponsored forces have not been able to fructify their dastardly objective. In fact, the very unfortunate death of the two Parihar brothers has only strengthened the bond that exists between the people of the region.

The political domain has given a reason to cheer with the installation of the Srinagar Municipal Council (SMC) and the Municipal Committees of the various districts in the Kashmir Valley. Junaid Matoo has been sworn-in as the Mayor of the SMC. He is a well known public figure who was earlier with the National Conference but shifted to the Peoples Conference due to the decision of his erstwhile party to boycott the Panchayat and Urban Bodies elections. The Kashmir press that is on the payroll of evil foreign forces has taken no time to denounce Matoo as a turncoat and a political chameleon. Nothing is further from the truth! Matoo is, in fact, the face of the new and young Kashmiri leadership that is emerging to challenge the dictatorial and dynastic politics that have plagued Kashmir for decades on end. He has, by his actions, made it very clear that he and those like him in the younger generation root for democracy and freedom. They wish to move ahead along with the rest of the nation in accordance with the Constitution with complete faith in its credentials of democracy and freedom.

It is becoming evident that the so-called armed Struggle in Kashmir which is, in fact, foreign sponsored violence has completely failed. Pakistan is exposed as a perpetrator of terror and is, now, fighting for its existence in the face of a back breaking financial crisis and international isolation.

The evolving situation gives much to cheer but this is not the time to sit back and enjoy the laurels. There is a proclivity, especially among the media, to exhibit a fair degree of elation at the slightest sign of an improving situation. Now that stone pelting is on the decline there will be endless discussion on how the backbone of the process has been broken. Many will say that Pakistan is at the end of its tether and on the verge of breaking down. Such bravado only gives ammunition to the perpetrators of this disruption to instigate the vulnerable section of society towards once again getting into action. This is the time to consolidate and build on the gains block by block with maturity, patience and perseverance till such time that the normality gets firmly embedded in the system. In this direction, security needs to be strengthened and most of all the grass Urban Bodies and Panchayats have to perform to the satisfaction of the people. Here’s hoping for some good time ahead in Kashmir.