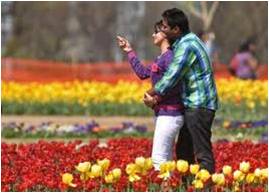 The tourist season in Kashmir is continuing in full swing and hectic preparations are on for the successful conduct of the Amarnath yatra. There is a general feeling of well being across the region. It seems as if the people have, to an extent, left behind the shadow of militancy and decided to move on for the better. The efforts of the army, the para-military forces and the JK Police to provide a security umbrella and pave the way for development seem to have, at last, started bearing fruit. The architects of terrorism, however, have not given up on their agenda. The recent shooting down of a police officer at Kamarwari at close range and in broad daylight indicates that terrorism may have gone down considerably but it has not been totally eradicated. Even sporadic acts of violence have the capacity to disrupt normal life. Post the Kamarwari incident the entire area came into the grip of fear and panic even as the Police started a massive man hunt for the terrorists. This is just one incident quoted as an example. It has been followed by many more acts of violence and infiltration attempts.

The challenge now is posed by anti-social and criminal elements of society who are active under the garb of militancy. Now the focus should be on controlling these trouble makers. The silver lining is that the security forces have a firm grip over the situation and all attempts to revive militancy have proved to be unsuccessful. The common man is feeling quite relieved with the security umbrella that now surrounds him. The challenge ahead is to ensure that the younger generation is never again attracted to this kind of a disruptive and violent life which can lead to the ruin of complete generations.

Peace in the state has been sustained over the last few years due to the untiring efforts of the government and the security forces. However, the good work would not have borne best results without the unstinted support of the people who rose as one against the cult of violence. The Chief Minister has urged better coordination between the people and the police force as a good way to sustain peace. A “Model Police Act’ may also be instituted shortly to guide the conduct of the police forces

With peace becoming a reality there is a need get back into the mainstream such people who were misled by the anti-social elements and have now realised their folly. The Chief Minister has, in a magnanimous gesture, passed instructions for the release of all persons within the age of 15 to 20 years who had been taken into police custody for complicity in instigating the agitations of 2010. All cases against these individuals have been taken back. Under the improved circumstances the misguided segment of society who took the wrong path due to indoctrination need to be given an opportunity to turn around and join the mainstream of society.

The beautiful Kashmir valley has always held an overwhelming attraction for people from across the world. Two decades back, when peace prevailed in the valley, tourists used to visit in huge numbers to the extent that the accommodation used to fall short of demand; then came an unfortunate period of lull in tourist activity due to the insecurity caused by terrorism and insurgency. Many Nations issued advisories to their citizens against travel to the valley and domestic tourists also chose to stay away. The improvement in the security scenario has led to a complete changeover of the situation. Many Nations have removed the advisory and tourists, both domestic and international, have again made Kashmir their primary holiday destination in India. This is the second consecutive year when the exuberance of the olden days has been witnessed all over again with an influx of tourists which is beyond expectation.

With a view to maintain this momentum, the government of Jammu and Kashmir has taken some positive steps to facilitate the tourist industry. An awareness campaign was launched to build confidence in those who wish to travel to the valley; attractive packages have been advertised aggressively. The end result is that many have made it a point to visit a place known since ages as heaven on earth. The roads, the bazaars and the tourist destinations are abuzz with activity. One can see the cheer on the faces of the hoteliers, the houseboat owners, the transporters and all other connected with the tourist industry. Everybody is trying his best to ensure that the guests go back with fond memories of the time spent over here. Tourism can change the face of Kashmir and can assist greatly in addressing the burgeoning problem of unemployment amongst the youth.

Unemployment is yet another crisis area in the development of the state, especially so, with regard to the educated youth. Every year hundreds of young people obtain degrees but there is no business or industrial capacity within the state to absorb them. The result is that most of them aspire for government jobs but not many of these are forthcoming. Now, slowly but surely, the youth are opening up and going for jobs across the country. The government is also trying to give a boost to the overseas potential; it has instituted a State Overseas Employment Corporation Ltd which will create profiles of the youth and assist them in getting employment abroad. Many other initiatives of this nature are required to wean the youth away from the single minded objective of a government job.

Jammu and Kashmir is on the mend, but the road ahead is full of challenges. These can be met only with hard work and cooperation of all stake holders. Things will improve further if people let go of frivolous issues and concentrate on development at the personal and collective level.