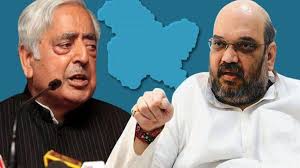 After more than 15 rounds of talks over three weeks in three different locations, the Peoples Democratic Party (PDP) and Bharatiya Janata Party (BJP) are nowhere near reaching a consensus with regard to government formation in Jammu and Kashmir.

Experts appear to be at their wits end in trying to understand why so much time is being taken on the matter, as in India, the stitching of coalitions usually is achieved in a few days, if not hours.

There is also an apprehension that given the apparent complexity the coalition will, at best, end up being tenuous and may not last too long, and thus, add to the misery of the people.

It would be better to have no government in place rather than see it crumbling in a short span of time.

The PDP has gone to great lengths to define its meetings with the BJP as a “structured dialogue.”  Structured dialogue is a term used mostly by the United Nations when it is bringing several countries on to a common platform for a specific initiative. How does such grandiose terminology fit in with simple talks between two political parties aiming to work out a coalition at the state level?  One cannot recall such a definition being given to similar talks in India or the world for that matter.  It is simply an attempt to project the view that the exercise is bigger than what it actually is.

The PDP is dwelling more on political issues with national consequences than on those concerned with the governance of the state. It is pressurising the BJP to rescind on its position on Article 370 and also give a written commitment for the revocation of the Armed Forces Special Powers Act (AFSPA).

There is one relevant poser for the PDP in this regard – in case it goes in for a coalition with the National Conference or the Congress, will it be able to achieve the ends that it is seeking to impose on the BJP?

The most astounding demand that the PDP is making is for the BJP Government at the Centre is to start the process of normalising relations with Pakistan!

Since when have political parties hoping to form a government in a state started dictating on foreign policy in India? Is it possible that next, the PDP may tell the Modi Government to roll back the nuclear deal with the US? Can it get more ludicrous than this?

There are a number of resolutions on Jammu and Kashmir passed by Parliament that guide government policy.  Primary among these is the resolution passed unanimously by both houses on February, 22, 1994.

While reiterating that Jammu and Kashmir was, is and will remain an integral part of India, the 1994 resolution expressed concern about Pakistan’s role in the proliferation of terrorism on Indian soil and condemned the support and encouragement that Pakistan was extending to subversive and terrorist activities in Jammu and Kashmir. It demanded that Pakistan vacate areas of the Indian state of Jammu and Kashmir, which it had occupied through aggression, implying Pakistan Occupied Kashmir and Gilgit-Baltistan.

Pakistan has, till date, not met the provisions of the resolution, for which reason, it has not been rescinded or amended even after so many years.

The response of the Indian Government to acts of terror and other foreign-sponsored disruptive activities in Jammu and Kashmir are guided by this and other similar resolutions on the subject. It cannot disregard the advice of the security forces that have been given the responsibility to maintain the security threshold in the state as laid down by the resolutions. Being in government, the BJP has a commitment to Parliament to uphold the resolutions both in letter and spirit.

Notwithstanding its aspiration to form a state government with a regional party, the BJP cannot take any decision on matters concerning Jammu and Kashmir, especially those concerning security and the territorial integrity of the region, without keeping Parliament informed. There can be no bilateral agreement between the BJP and the PDP on legislations like AFSPA.

“AFSPA gives an impression that Jammu and Kashmir continues to be a disturbed area when the situation is absolutely normal. Why should you own up to such an embarrassment internationally,” a PDP leader was quoted as having said.

Who in his right senses will say that the situation in Jammu and Kashmir is absolutely normal? If it is so, then the PDP should form the government as soon as possible and revoke the Disturbed Area Act and the Public Security Act, thus paving the way for the ultimate revocation of AFSPA.

Once the government is formed, the PDP-appointed chief minister will also be the chairman of the Unified Command. He will then get an opportunity to review the security situation and take necessary steps to create conditions where the army feels confident to shed its internal security responsibilities in the state.

Once appointed, the chief minister would be well within his right to demand additional funds for rebuilding the capacity of the police force of the state.

At this point in time, while working out modalities of government formation, the BJP and the PDP should be talking only about issues related to the stitching up of a coalition. Who will be chief minister; which party will get how many ministerial portfolios; what facilities will the Centre extend to the state for fulfilling development promises is what the two parties should be talking about and building a consensus upon.

At best, the BJP can agree informally to put on hold its political movement for the abrogation of Article 370. It simply cannot give unilateral assurances on matters of national security and foreign policy.

As things stand now, Mufti Mohammad Sayeed and he and his party would be well advised to limit aspirations to their spheres of influence.