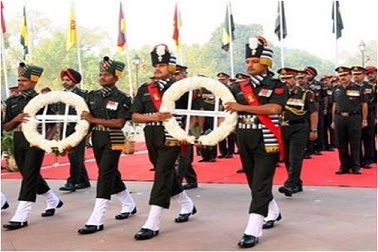 India looks upon October as a very auspicious month; the festival of Dusshera falls in this month and so does the very significant Muslim festival of Bakrid. Both festivals epitomise the victory of all that is just and righteous. Dusshera has a military significance since it denotes the victory of the righteous Lord Ram Chandra over Ravana the haughty Kind of Lanka. Bakrid denotes the willingness of the Prophet Abraham to obey the command of God almighty to the extent of sacrificing his only son Ismail; it also shows the strength of Ismail who most willingly offers himself for sacrifice in the hands of his own father since it has been so decreed by God.

This month also holds great significance so far as the military history of the nation is concerned. China declared an unjust war against India on October, 20, 1962; Netaji Subash Chandra Bose laid the foundation of the Indian National Army (INA) also known as the Azad Hind Fauj on October, 21, 1943 at Singapore and the Indo-Pakistan War of 1947 was declared on October, 27.

This year marks five decades since the Chinese aggression, a historic occasion which logically should have been marked with a number of appropriate ceremonies. The media has, of course, put in some effort but due to lack of support from the government and the Army this effort has been restricted to some articles and half hearted coverage by television channels on the day that the war was declared by the Chinese.

That China needs to forget the whole sordid affair is something that can be understood, the unilateral resort to aggression exposed the country and its leadership as hegemonic, intolerant, unwilling and incapable of resolving issues through diplomacy and dialogue; China’s image received a severe beating in the international arena for this act, something that the country has not been able to offset even today. Why, however, the Indian government wishes to remain silent is a huge unexplained mystery. The probable reason is the need to avoid agitating the Chinese since a conflict of interests with the powerful neighbour is something that our leaders wish to shun; a show of convergence of interests is the order of the day.

The argument is sound to the extent that diplomacy is concerned but notwithstanding the perceived diplomatic imperatives there is no merit in forgetting or bypassing the very important historical event altogether. What of the honour that needs to be extended to those brave soldiers who sacrificed their lives in the war for the cause of the country? Do their families not need to be given due respect in view of the supreme sacrifice of their kin under insurmountable odds? Is this not an achievement that the nation should not only be proud of but also be seen to be proud of?

INA, unfortunately, is an organisation with which the modern Indian army has developed no association. This is because the Indian army, even six decades after independence, is making no effort to shed the trappings of its erstwhile anti-national avatar of the British Army in India. It seems that in a misconstrued interpretation of history, the INA is still being seen by the Indian army as an enemy since it joined with the Japanese to attack the British Army in World War II. So while Netaji Subash Chandra Bose is kept in a collective amnesia mode, Field Marshal Slim, the British general in charge of the Burma campaign is looked upon as a hero whose leadership skills form part of the military history teaching of the Indian army.

It would be more befitting for the Indian Army to draw inspiration from the brave patriots of the INA; it is this army which should provide the ideological foundation for the Indian soldier. There is a lot that can be done in this regard; the history of the INA should form the curriculum of military training, a museum could be created in one of the iconic training centre’s of the army like the Indian Military Academy or the College of Combat. As things stand now, one can say with reasonable amount of confidence that the modern Indian soldiers do not even know that on the midnight of October, 22, 1943, the Azad Hind government declared war on Britain and America and put in a volunteer force of about 56,000 patriotic Indians of all castes and creeds to fight for the cause of national independence.

Some forward movement is there with regard to the Indo-Pakistan War of 1947, the third major event in Indian military history in the month of October. The Indian Army has designated the day that the war was declared as Infantry Day. The occasion is marked with functions like wreath laying and holding of lectures. On this day every year the senior most Infantry officer, in the present context the Chief of Army Staff, lays a wreath at India Gate. The India gate being a memorial of the British era holds the names of only those Indian soldiers who fought for the British as a part of the British Indian army. It is an ugly reminder of the exploitation of the Indian soldier by the British. Hence, the wreath laying is by itself a travesty of the military history of the Nation; a mockery of all those brave solders who sacrificed their lives in the said war and all other wars fought by modern free India. India Gate should have been reduced to the ground on the very first day of independence but our great leaders with their warped sense of history maintain it while not permitting construction of a war memorial in the same place dedicated to those brave Indian soldiers who have laid down their lives while fighting for the cause of free India, absolutely incredible.

If we wish to inspire our future generations towards the noble pursuit soldiering to defend national sovereignty and integrity then we need to get our history and our priorities right. This is one area in which we must draw lessons from our previous masters, the British. Such was their level of motivation and indoctrination that even after sixty years of independence we are not ready to come out of the shadow of their teachings and culture. The British army has moved on but we stand where they left us.

We need to look at things in an objective and contemporary manner. We should be more concerned about soldiers of our own army rather than those who fought for foreign masters. To our own soldiers, both living and dead, we need to bestow all possible honour and dignity. By caring for them and looking after their families the Nation can send out a clear message that each and every soldier, especially those who sacrifice his life for the Nation, holds a special place in the national consciousness; mere word are not enough, they have to be translated into appropriate deeds that give the right message.