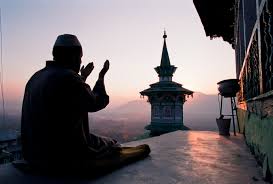 If there is one true example of a “Paradise lost” it is the Kashmir Valley. The land is beautiful and cursed in equal measure. How a place as holy as this region, the abode of Gods, Goddesses, Saints and Sufis can be subject to so much pain and suffering is incomprehensible.

A lot of what is happening can be related to the Kashmiri psyche. Rajatarangini, the recorded history of the Kashmir Valley, speaks more of persecution than periods of peace. Particularly in the last 300 years or so the area has seen one invader after the other.

Under these circumstances, the Kashmiri’s developed a unique system of surviving under authoritarian regimes. They were both devious and subservient to the authorities while being close knit within themselves.

Amidst the persecution, they retained faith in the holy character of their land. This explains the close bond between the Kashmiri Pundits, the Kashmir Muslims and the other communities that are settled over there like the Sikhs. They were of different faiths but followed a common culture, a culture that has now been given a name – Kashmiriyat.

They jointly revered their Sufi saints like Lalleshwari, Rupa Bhawani, Sheikh Nuruddin, Parmanand, Rishipir, Jeewan Shah and many more as also the abodes of Lord Shiva like the Shankaracharya and the Shri Amarnath shrines.

This community living, religious affiliation and “management of authority” carried on till August 1947 when the Indian subcontinent rid itself of the British yoke but was unfortunately divided on religious lines.

Before the destiny of Kashmir could be decided in an equitable and just manner, evil forces from Pakistan cast their eyes on the region and invaded it. The invaders unleashed a horrifying brand of barbarity on the hapless people till such time that the Indian army went in as saviours and restored the situation.

The people suffered terribly before a portion of the land came into the fold of the Indian Union and finally attained what the people had  aspired for hundreds of years – complete freedom as part of a Democratic Union.

For the people, sadly, what happened was too sudden. After years of subservience they were not ready for such a major change. They started looking for demons everywhere; being suspicious by nature they started suspecting the motives of the very Constitution of India and the Government of the Union of India.

Some political leaders and heads of feudal families in Kashmir looked at this development as a means to further their personal ambitions. They raised a cause for complete independence of Jammu and Kashmir, a dispensation where the Union would do all the dirty work of guarding their lives and providing financial sustenance while they would be free to lord over not only the Kashmir Valley but the entire state.

These leaders and feudal lords cleverly used certain provisions of the Constitution and the vulnerabilities of their docile and simple people to further their objectives.

They brainwashed the people into believing that the Government of India was the new “authority” that they were required to raise a voice against. The people did not realise that a separate flag and a Prime Minister would, in no way, enhance the freedom that was already guaranteed to them under the Indian Constitution. Soon the matter took the shape of a dispute.

For the Government of India, the burden of looking after the new nation was so heavy that it did not wish to get embroiled in a small political skirmish with a state, thus, whenever a few slogans were raised it gave some money and the matter was settled.

Thus a pattern set up, the new system of “management of authority” envisaged raising of Azaadi (Freedom) slogans to compel the centre into granting a financial package. Of this, a few Rupees were given to those who raised slogans and the remainder was pocketed by the leadership who gained astounded wealth.

Unfortunately, the system habituated the people to corruption and getting money without working for it. What they did not realise was that they were victims of corruption of their own leaders and not the centre.

A bigger misfortune that befell the hapless people was the advent of foreign sponsored terrorism which broke their social fabric and brought in, forcefully, a brand of Islam that was totally at odds to their enlightened Sufi version.

The after effect of this development is being seen now when the youth are turning towards Islamic radicalism without understanding what their culture actually stands for.

It is so sad to note that the Kashmir leadership. for petty personal gain, stood aside and allowed this political, social and religious churning to take place.

The young boys of Kashmir, like everybody else in India, aspire for a life of hard work and good money. The constant grouse against India that their elders harbour (out of habit) and speak of so eloquently, has created in them a feeling of frustration; they have constructed in their minds a totally wrong belief that India stands between them and their aspirations.

They do not pause to think that, in the very same India and without Article 370 or some other special status, their contemporaries are moving forward at a fast pace. They do not realise that they can also do so if they concentrate on their studies.

They are so misinformed that while stone pelting their own Police force and the paramilitary they look at the Indian Army as an enemy. Little do they realise that the army is protecting their very life and existence from an assault by some extraordinarily brutal and diabolic forces.

It is time for the Kashmir people to introspect; they need figure out as to how the rest of the Indian people are using freedom and democracy to surge forward. They need to realise that democracy gives certain powers and freedom to the individual to progress and prosper. This has to be leveraged by the individual personally. They should understand that at the behest of a few corrupt families they are walking on the wrong path and inflicting untold damage on their coming generations.

Finally, instead of aping a new form of fundamentalist religion being thrust down their throat by those who wish to keep them subservient they should restore their enlightened and integrative  Sufi credentials and resurrect Kashmiriyat.

The choice for Kashmiris is very clear, democracy and freedom with India or a fate akin to Syria and Afghanistan. One can only hope that good sense will prevail.