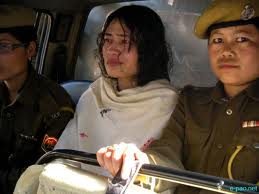 Irom Sharmila Charu is a woman of substance, a rare human being who possesses an iron will and the capacity to tread a difficult path for the sake of her people. She has chosen to follow the Gandhian route of non-violent political protest and has been on a hunger strike since November, 05, 2000 for realisation of her demand of repeal of the Armed Forces Special Powers Act (AFSPA) from her home state – Manipur. For many years now, she is in custody and is being force-fed through her nose. The recent fast against corruption by Anna Hazare has led this “Iron lady of Manipur” to hope that her lonesome fight will now be recognised.

Irom Sharmila’s peaceful commitment to her cause and her people is worthy of the universal appreciation that it is generating. There is not one person in India or the world who does not empathise with her. Yet, her cause has not been able to gain centre stage or strike the collective will of the people. It can be reasoned that the remoteness of the North-East region results in miniscule engagement with the media and other forms of institutional support, and as such, the issue has not impacted the national conscience. But then, even the people of Manipur have not risen to, at least, propel their own government into action and find ways and means to ameliorate her suffering.

There are a number of reasons behind this very obvious lack of momentum for the cause that she is espousing. In Manipur, the main bone of contention is the faceoff between the Christian Nagas and the Hindu Meities who inhabit the area and not issues with the central government or the Indian Union. This problem is an offshoot of the Naga aspiration of a Greater Nagaland that would comprise of about two third of the territory of Manipur, which is obviously not acceptable to the Meities. The result is proliferation of dozens of so called insurgent groups in Manipur who are literally running a parallel government and indulging in rampant extortion for personal gains. Ironically, these groups regularly enter into Suspension of Operations (SOO) pacts with the security forces and the government, to earn handsome rehabilitation packages and then return to the so called insurgency.

The inability of the State government to control this corruption and lawlessness is responsible for the continued backwardness of the region despite a regular flow of development funds. Immigrant labour which ventures into the region for work is intimidated and at times killed, leading to a shortage of manpower which negatively impacts ongoing projects and economic activity. Ambitions projects like connecting Imphal with a broad gauge railway line and construction of extensive highways, which can change the face of the region, have been going on for years but are not being completed due to incessant disruption of work. The local intelligentsia is not asserting itself and all those who get a job outside the State do not go back, such is the level of suffocation. Disruption of life due Bandhs is a common feature. The resultant instability is being exploited by inimical foreign forces, leading to smuggling of arms and narcotics; this adds a critical dimension to the security environment.

This state of self denial of the people of Manipur is the root cause for most of the ills that plague the region; not the security forces. In fact, the trickle of development that is happening is mainly due to the presence of the Army and the application of AFSPA which keeps the insurgents on check and ensures a semblance of law and order. If AFSPA is removed the region will, most likely, degenerate into absolute chaos. Insurgents will rule the roost and cause widespread mayhem; whatever little development is happening will cease. Surely, Irom Sharmila would not like to see this happening to her beloved state for which she is making such a great sacrifice.

The Government of India is seized with the challenge of finding ways and means to amend the provisions of the AFSPA in consonance with an obligation to protect human rights; the possibility to replace it with a more humane act or repeal it altogether is also being explored. Recently, Home Minister P Chidambaram has gone to the extent of saying that he shares the disappointment of Irom Sharmila, but consensus is not emerging on the subject.

Nobody can condone a barbarous human rights violation of the type which propelled Irom Sharmila into resorting to this extreme step, but, it also has to be accepted that the act was more of an aberration than a norm. Over a period of time the Assam Rifles and the Army have instituted a number of checks and balances to ensure that such incidents are kept to the minimum and exemplary punishment is meted out to violators should they take place. That no such violation has happened in the last ten decades is ample proof of this fact. Irom Sharmila has made her point, the government has taken cognisance, a national awareness has been created, now is the time to move on. A vibrant and healthy Irom Sharmila can push her people towards joining the success story of the Indian mainstream. She can work towards rooting out corruption, extortion and exploitation to create a conducive environment for the eventual repeal of AFSPA and DSA. It is time for the people of Manipur and the Nation to join hands in convincing the gutsy “Iron lady of Manipur” to put an end to her misery and espouse the larger cause of her people. Her life is too precious to be thus wasted.