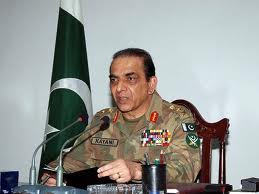 “While it is understandable to give peace a chance through a political process, no one should have any misgivings that we would let terrorists coerce us into accepting their terms,” said Pakistan Army Chief, General Ashfaq Parvez Kayani a day after the Tehreek-e-Taliban Pakistan (TTP) claimed credit for a deadly attack in Upper Dir district in which the General Officer Commanding of Pakistan’s 15 Division, Major General Sanaullah Niazi, along with the commanding officer of an infantry battalion deployed in the area and a soldier were killed. The statement is carefully worded and political in nature but the frustration and anger that the Army Chief is feeling is not difficult to discern.

While General Kayani fights with his own ghosts and decides whether he should go on retirement or stick on for some more time to avenge this humiliation, it is Nawaz Sharif and his government that is on the dock. It can never be forgotten that it was on the mandate of resolving the power issue and containing militancy that Nawaz Sharif managed to give an awful drubbing to the PPP. Now that Asif Zardari has shown statesmanship by gracefully exiting from the office of President of Pakistan, Nawaz is left riding his white Tiger all by himself with nobody to shift the blame on.

Nawaz Sharif had declared that he would follow the path of negotiation with the Taliban to get peace and this is the direction that he seems to be taking. He is also trying to create consensus for his policies within the political spectrum of the country, despite the brute majority that he enjoys. To this end, he called for an All Party Conference on September, 09. The unanimously reached resolution was to negotiate with the militants and “action to be taken” if the negotiations do not work. Imran Khan, the latest dove in the pack, went to the extent of saying that keeping negotiations side by side with fighting terrorism is not a wise move. In other words, he recommended complete cessation of operations while the negotiation process was put in place.

In fact, so excited is Imran Khan about the option of negotiation that his party’s government in Khyber Pakhtunkhwa (KPK) has already announced withdrawal of the Pakistan Army from Malakand, a move that has taken the defence experts the world over by surprise. On what basis the decision has been taken considering that the writ of the government in the area is tenuous to say the least? The KPK government definitely cannot boast of the administrative efficiency and law enforcement potential that would make a move like this tenable.

The TTP, quite delighted by the way things were moving, immediately got on a high horse and set a number of conditions for the talks to proceed. The main demands to lay down a foundation of trust and confidence before the talks could proceed were withdrawal of military from the tribal areas and release of all TTP prisoners. The ultimate demands are, of course, well known; these are imposition of Sharia Law and designation of the Nation as the Islamic Emirate of Pakistan. Even as the Government was reeling under the sheer impudence of the demands, the TTP thought it fit to give a jolt by killing Major General Sanaullah Niazi. Before acceptance of talks they felt free to carry on with their violent agenda and they considered this brutal act an apt ‘shock and awe’ tactic.

It has not taken long for the impracticality of the political decision to offer negotiation, especially so, the immaturity that marks Imran Khans political posture to come to the fore. The attack in Upper Dir demonstrated beyond doubt the excellent intelligence network of the TTP that makes possible deployment of an IED at short notice on the route that a very senior officer of the Pakistan Army is likely to take. It has been proved, beyond reasonable doubt, that the TTP continues to be a very potent fighting force especially so in the Swat Valley where the “all is well” bugle has been sounded by Imran Khan.

The Pakistan Army must also be ruing the day when it decided to follow the constitutional chain of command and accept the passive decision of the civilian leadership. The end result is that its operational policy has become muddled and ineffective due to lack of direction. It has lost steam much before it could get anywhere near the zero-tolerance level against militancy that it had laid down when it joined battle with the TTP. The stoicism that it has shown in pursuing the civilian line of negotiations has caused disarray in its forces on ground, shifted the focus from concerted operations and landed it in the soup that it finds itself in presently. Now the situation is that the Army stands isolated with the government too nervous to interfere or give directions. It is a blessing for the force that General Kayani has now chosen to speak bluntly about not caving in to the demands of terrorists.

Three major fault lines have caused this unfortunate situation. First, the PML-N and PTI hobnobbed with the TTP before the elections and gave the militant organisations undue influence that it is now being exploited by the latter to good effect. Second, it is the government that should have set preconditions for talks with shunning of violence and laying down of arms topping the agenda; here the situation has reversed giving advantage to the adversary. Third, the Pakistan Army should have isolated itself from the political scenario and continued with the pressure that it was exerting on the militants.

While Pakistan regroups, reconsiders its options and comes up with a policy to meet the deteriorating situation, India needs to learn a few lessons from the mess that has been created over there. The main among these is to desist from a premature letting down of guard in terrorism afflicted Jammu and Kashmir under pressure of political compulsions. The entire process should play out its course and terrorism should be totally eradicated before any change in the security threshold is even considered.