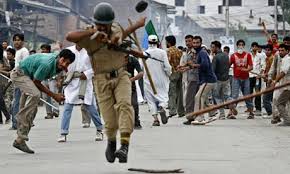 The anti-national and anti-social elements in Kashmir have mastered the art of building up on small incidents, blowing them out of proportion, and after that, orchestrating negative publicity to organs of the government through paid media

A good example of this process is the manner in which an incident was played out in the Chuntimulla area of district Bandipura recently.

A joint team of the JK Police and the local Army unit, in the morning of November 17, carried out a search of some houses in Village Jaban, Chuntimulla. The search was carried out on the on the basis of available intelligence about presence of terrorists over there. All laid down procedures were adhered to; the Sarpanch of the village was present when the search was conducted.

Three suspects were identified and were taken into custody for further investigation at Police Station Sumlar. When the party was moving towards Sumlar it was accosted by a mob near the army camp at Chuntimulla. The crowd attacked the security forces personnel and started pelting stones. In the melee a few civilians, including a lady, got injured.

The entire blame, after some astute distortion of facts, was laid on the army. It was said that the army carried out the search in the middle of the night at 3.30 AM and beat up the suspects mercilessly. Further, it was said that the army resorted to “Lathi (Baton)Charge” in which the civilians, including the woman, were injured.

These allegations are full of anomalies’. If the suspects were beaten up mercilessly why is there no report of their being treated in a hospital? In fact, reports suggest that they were hale and hearty the next day.

If the raid had been carried out at 3.30 AM then how is it that the search party was still a few kilometers away at Chuntimulla at 8.30 AM when the protests broke out? They should have reached Sumlar before daybreak.

It is well known that the army does not use tear gas or carry out a “Lathi Charge” to disperse crowds. As such, the allegation of the civilians being hurt by the army troops does not seem to be plausible. No mention has been made of the stone pelting which, probably, resulted in the civilians getting hurt.

There are some elements in Kashmir who are giving wind to a cult of violence. Their numbers are small but they have the finances and the infrastructure to engineer disruption at the slightest pretext. They have been thus mandated by their masters from across the border.

These elements take advantage of the inherent mob mentality among the Kashmir people to generate aggression on the streets. When the law enforcing agencies try to control the situation some untoward incident of violence is engineered.

Thereafter, the media takes over! Media in Kashmir, sadly, has thrown professional norms and ethics to the dogs and is always ready to sell itself to the highest bidder among the forces of disruption and divisiveness.

Media stories on such incidents carry provocative statements taken from a selected set of locals known to be aligned to the divisive forces. These statements are supplemented it with a liberal doze of propagandist statements from the separatists. The separatists pontificate on issues while sitting in their grand houses in Srinagar without even a cursory knowledge of what happened on ground.

In this instances also, the separatist Syed Ali Geelani was at his element while charging the security forces of cruelty against “peaceful voices of Kashmir people.”  Only God knows as to how, while sitting miles away, he found out that the security forces were “cruel” and the mob “peaceful.”

The facts provided by the security forces and the government authorities were relegated to insignificant spaces and presented in a manner that gives an impression of their being false and fabricated.

In this particular incident, it seems that the security forces are being pressurized to save the four young boys under suspicion of being OGWs. It is for this reason that even on the next day newspapers carried stories of the villagers being “terrified” due to continuing search operations by the army. The objective could be to stop the search operation by exerting pressure.

There are many earlier instances when similar pressure has been mounted on the army with the intention of derailing an operation in which some local terrorist or a local Over Ground Worker (OGW) is involved.

That the security force continued with the operation despite the pressure is indicative of the fact that they were sure of what they were doing and were not ready to lose out on a good opportunity to track down deadly terrorists.

The allegations levied against the Army seem to be aimed at maligning the positive image of the organisation with the intent to disrupt the ongoing counter terrorist operations in the area.

The intention behind highlighting these anomalies is not to shield those who are wrong; it is to ensure that anti-national forces are not allowed to fulfill their vested interests. Anybody who has gone against the law, whether it is a policeman or a soldier or a government official or a civilian must be brought to justice. Justice in India, however, is not meted out by mobs, there is a robust judicial process in place for the same and it should be allowed to function.

It would be prudent for the responsible segments of the Kashmiri civil society to understand the pattern with which violence is being engineered in the Kashmir valley by anti-national and anti-social forces. These elements are fanning a cult of violence which will have a negative impact on the society at large, especially the youth. As Kashmir moves away from the shadow of the gun into an era of peace and development it becomes necessary to expose to such inimical elements who wish to derail the process.