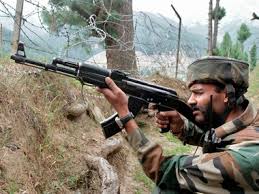 Across the world, especially so in India, activity revolves around seasons; there is the examination season, the festival season, the holiday season, so on and so forth. In Jammu and Kashmir there is an additional season called the “infiltration season” that holds great importance. This season begins sometime in mid- April and goes on till end October.  At this point in time the season is at its peak!

As all other cases, this season also has a story behind it. This is the time when the snow melts, the fog density decreases and forest cover gets denser due to monsoon rains; a perfect combination for the terrorists poised to infiltrate into the state.

This is the time when the infiltrators can pick and choose an area from the International Border (IB) all through the line of control (LOC) for their nefarious designs.

This year, the terror masters based in Pakistan, who oversee this action, have been in hyper active mode from the month of March itself; the likes of Syed Sallah-ud-din and Hafiz Saeed are often seen carrying out reconnaissance along the infiltration routes and conferring with the local Rangers of the Pakistan army, who hold the mandate of facilitating the activity. All of this is done under the watchful eye of Pakistan’s Inter Services Intelligence (ISI).

This year the infiltration season holds extra importance for the players on the other side who have had lean seasons in the last few years. They have to show results or risk the possibility of getting out of business. Even the ISI will not support a losing entity in perpetuity; it will simply change the prime movers.

The Indian Army, with able support from the Jammu and Kashmir Police and the Intelligence Bureau, is poised to receive the “unwanted guests” in a befitting manner. Lt General DS Hooda, Commander of India’s Northern Army deployed in Jammu and Kashmir has said, “We have reports that about 150 militants were camping across the LoC in Kashmir and 100 across LoC and IB opposite Jammu.”

Director General Police, Jammu and Kashmir, K Rajendra has also placed the number of terrorists ready and waiting to be infiltrated at 100-200. “Attempts are being made from across and there is lot of concentration. There are intelligence reports that the attempts of infiltration will increase”, he is reported to have said.

The Union Home Ministry (UHM) that has access to even more specific information, revealed in mid-March that about  60 terrorists belonging to LeT and JeM groups are pursuing their training at terror launch pads across the border while waiting for an opportunity to sneak in through the IB/LOC. In a more specific intelligence report in beginning April, UHM spoke of over 30 terrorists spotted at launch pads in Pakistan Occupied Kashmir (POK) adjoining Poonch District.

A recent cross border firing on Sunday, 05 July, was one of many such incidents that have taken place over the last month or so.  Troops took the precaution of carrying out cordon and search operations in the adjoining jungle area to ensure that no infiltration was carried out under cover of fire.

In fact, the infiltration process gained momentum in the month of March itself when a spate of activity was witnessed in Kotli area of POK. Terrorists were spotted camped at Shahbaz and Nangi posts. Pakistan resorted to ceasefire violation during that period thus corroborating the intended design.

Incessant mortar firing, followed by several infiltration attempts took place along the IB in the Jammu sector. Vigil along the IB was strengthened by deploying the Central Armed Police Force (CAPF) behind the Border Security Force (BSF).

It is to the credit of security forces that infiltration could not be conducted in Jammu and Poonch sectors. It seems that repeated failure has forced the terror mongers to look towards the Kashmir valley. It is for this reason that the months of May and June have seen a number of infiltration attempts from the traditional routes in Uri and Kupwara sectors.

In May end, a group of 6-7 terrorists tried to sneak in from Darshan Post in Tangdhar, Kupwara; the attempt was thwarted and one terrorist was killed. In a second big attempt in June, a group of 15 terrorists first tried to infiltrate from Machil, Kupwara and on being unsuccessful made a second forceful attempt at Gurez, Bandipore. They have not met with any success.

The month of June witnessed yet another big attempt in Torna sector in Uri. The alert unit deployed there was quickly reinforced with Commandos to get as many infiltrators as possible. It is reported that five terrorists were killed while two Indian soldiers sustained injuries. The remainder terrorists fled back into POK, as is the norm for this gutless cadre; they never stand and fight.

Infiltration attempts have been facing abject failure for quite some time now. In the previous year a bulk of the 101 terrorist killed in the state died while attempting infiltration.

Despite the success achieved by the security forces, terror mongers are not ready to let go of their evil agenda. Now that efforts to reinforce the terrorist cadre operating in the Kashmir valley through infiltration are hitting a road block, an alternate is being sought through indoctrination and recruitment of locals. Increasing recruitment of educated youths of the valley in terrorist organisations represents one of the biggest emerging challenge for the new Government of Jammu and Kashmir.

While there is a reason to be satisfied insofar as counter infiltration and counter terrorism efforts are concerned, the time to sit back and relax is definitely a long way off. The idea is to keep the pressure till the end point of zero terrorism is not achieved. It may be a challenging objective but it is definitely not unachievable.