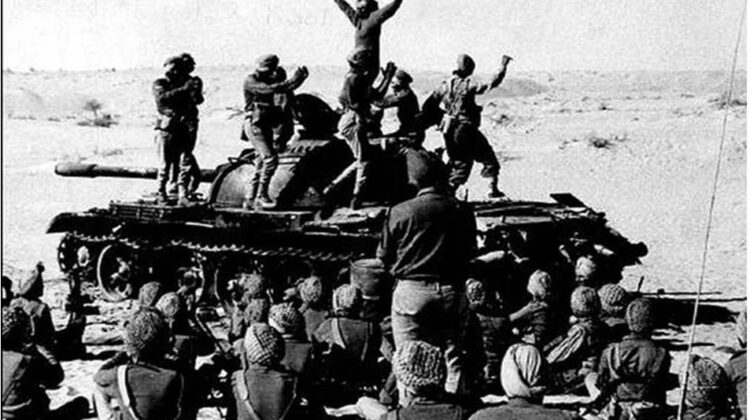 After the Sino India War of 1962, Pakistan think tanks concluded that military solution to Kashmir was a possibility as they were equipped with modern American Weapons like M 47/48 Patton tanks and F86 Sabre and F104 Star Fighter aircrafts, under Mutual Defence Assistance agreement with United States and South East Asia Treaty Organisation, in 1954.

Lal Bahadur Shastri was sworn in as second Prime minister of India in 1964 after the sudden demise of Pandit Nehru. General Ayub Khan had taken over as President in 1958 after toppling  Iskander Mirza . He provided Air/ Logistics bases to United States for spy missions against Soviet Union.

New untested leadership in India, American support and proximity to the Chinese, motivated Pakistan to launch a military campaign against a supposedly weakened India still recovering from the Chinese debacle.

The Operation, designed to annex Kashmir, was planned in three phases. Phase 1 was to undertake low level operation in Rann of Kutch to test Indian willingness and capability to react. Phase 2 was to infiltrate Pakistan Army officers led Razakars into Jammu Kashmir to foment and insurgency. Phase 3 was to launch major offensive towards Akhnur bridge on Chenab River through Chamb-Jaurian and threaten Jammu.

In Phase 1 ,Pakistan  8 lnfantry Division attacked under General Tikka khan, with two Infantry brigades in the Northern part of Rann of Kutch and  captured two Indian Police Posts of Sardar and Kanjrakot on 7 April 1965 and also isolated Vigokot , Biar Bet and Chand Bet posts . 31 Infantry Brigade was moved from Ahmedabad to reinforce the area .  Kilo force was raised after assessment of threat . 50 Para Brigade also was moved. India recovered most of the area by 23  April. The hostilities finally ended on 1 July 1965 due to British mediation. The Code Name for Phase 2 was “Operation Gibraltar,” under which six self contained battalion strength groups were inducted in the first week of August in Jammu Kashmir. They were called as Tariq force to operate in Kargil, Sonamarg area;,Qasim Force for Chowkibal; Keran area, Khalid force for Handwara;, Tithwal , Salahuddin Force to operate in Gulmarg , Baramulah; Ghaznavi Force for area Mendhar, Rajuari, Naushera and Babur Force for Udhampur, Ramban area.

Civilians reported the intrusions immediately and most columns disintegrated and returned back to bases behind the Cease fire Line (CFL). Gibralter was a total disaster. 15 Corps now resorted to offensive plan to capture Uri Punch Bulge. Operation Bakshi and Operation Faulad was launched from North and South. Major R S Dyal, second-in-command, 1 Para with his Task Force captured Haji Pir pass at 1100h on 27 Aug 1965 and was held till end of the war. He was awarded Mahavir Chakra for the daring action.

Pakistan, now frustrated by retaliatory action, launched Phase 3 called Operation Grand Slam on 1 September 1965 through the Chamb- Jaurian defences across Manawar Tawi with a Division and two Armoured Regiments. The objective was to capture Akhnur and Jammu and cut off communication line to Kashmir Valley. General Harbaksh Singh assessing the critical situation and approached COAS for permission to launch counter offensive in Punjab and Rajasthan. COAS immediately contacted Defence minister for clearance. Prime Minister Lal Bahadur Shastri cleared the offensive within 6 hours and gave total free hand to Army. The Strike Corps was released towards Sialkot and 11 Corps troops headed for Lahore. The Pak offensive in Akhnur Jammu was recalled. The largest tank battle, after second World War, was fought in Phillora , Wazira wali  area deep inside Pakistan. Indian Forces reached Batapur  across Ichogil Canal  just 5 Kms from Lahore. A graveyard of Patton Tanks was created by Indian Armoured Brigade and IAF at Valtoha on Bhikiwind- Khemkaran axis.

Pakistan approached the UN for Ceasefire. India announced Ceasefire on 23 September 1965. Ayub Khan’s dream was shattered. The Tashkent Agreement,mediated by Soviet Union, was signed on 10 January 1966. India returned all occupied territory including Haji Pir. Lal Bahadur Shastri died in Tashkent, now in Uzbekistan on, 11 January 1966 under mysterious circumstances. Let us remember the war heroes of 1965, who made supreme sacrifices and were awarded highest battle honour Paramvir Chakras for conspicuous bravery, while fighting the enemy for integrity and safety of country. 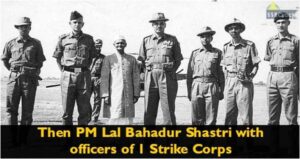 Lt Col A B Tarapore was the commanding officer of the Poona Horse during Indo-Pakistan War of 1965 .He was born in Mumbai (Bombay) on 18 August 1923. He studied in Sardar Dastur School in Pune and matriculated in 1940.He was an excellent sportsman, ferocious boxer, good swimmer and also played Tennis and cricket. He was commissioned on 1 January 1942 in the 7 Infantry Regiment of Hyderabad State Forces and later joined 1st Hyderabad Imperial Lancers  and saw active service in West Asia during Second World War. Hyderabad joined the Indian Union on 17 September 1948. He was commissioned in the Indian Army in 1951 and was posted to Poona Horse, the elite Armoured Regiment of Indian Army. He was fondly known as Adi in the Regiment. While serving with Alfa squadron, he established a close rapport with proud and valiant Rajput troops and learnt their customs and traditions.

One day , he had invited some guests at his house. He had gone out for an Training exercise ,his Jeep got bogged down in a Nala .He himself got down and pushed the vehicle out along with his crew and got mud all over his overall. The guests were surprised to see him in the state and told that he could have asked for another vehicle. He told them that he will never abandon his troops in war or peace. He was a perfect officer and Gentleman. 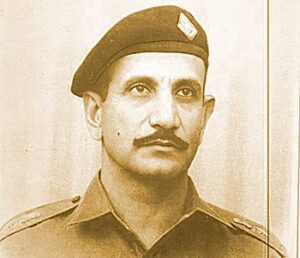 In the 1965 war, Poona Horse, equipped with Centurian tanks, was the leading Regiment (Regt)of 1 Armoured Division that had been tasked to capture Phillora. The regiment was advancing between Phillora and Chawinda , Pakistan Armour counter attacked from Wazirwali. A ferocious tank vs tank battle  took  place. 10 enemy tanks were destroyed and Phillora was captured. Tarapore himself led from front and controlled the battle. He was severely wounded but he refused to be evacuated. Again on 14 September, he led the Regt and captured Wazirawali  under heavy Armour and Artillery Fire. He had such a determination and grit that in spite of his tank getting several hits, he led the attack on  Jassoron  and Butar Dograndi , west of Chawinda ,on 16 September 1965. He further supported Infantry battalions for capture of Chawinda. He was fatally wounded during attack by a direct Artillery shell hit .

Poona Horse under his command  destroyed 60  Patton  tanks  at cost of 9 own tanks. This was one of the most deadly Tank battle after 1945. For the conspicuous bravery ,steel determination , heroic action, valour during  six days of Armour battle in the best traditions of Indian Army , Lt Col  A B  Tarapore was awarded  Paramvir Chakra posthumously .

CQMH Abdul Hamid  of 4 Grenadiers was a dare devil , who stalled the Pakistan I Armoured Division at Village Chima on Khemkaran –Taran taran Axis. He with his 106 mm Recoil-less Jeep mounted Gun destroyed 6  Patton tanks and made the supreme sacrifice of his life. He was born in Village Dhamupur, Ghazipur District, Uttar Pradesh on 1 July 1933. His father Mohmmad Usman Idrishi was a tailor by profession and mother Sakina begum was a home maker. He was married to Rasoolan Bibi. He was enrolled in 4 Grenadiers on 27 December 1954. He fought valiantly against Chinese Army at Nam Ka Chu River, NEFA sector, as part of 7 Infantry brigade in the 1962 war.

During Indo-Pakistan War of 1965,4 Infantry Division was entrusted with a dual role .Firstly, advance rapidly up to eastern bank of Ichogil canal, capture maximum Pakistani territory and threaten Lahore. Secondly, if Pak launches offensive from Kasur Khemkaran axis then take up defences at Asal Uttar and Chima east of Bhikiwind as part of Divisional Defence plan . 4 Grenadiers occupied defences at Village Chima  on  night of 7 September 1965.  A tank troop of 3 Patton tanks appeared from Khem Karan side at 0730h. Amdul Hamid had deployed his RCL well camouflaged in sugarcane fields, he opened at the range less than 50 yards and one tank. The following tanks crews fled from the spot. 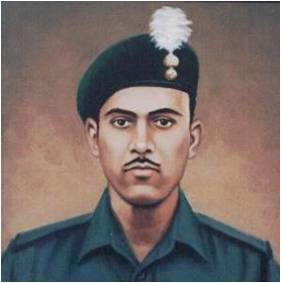 Again, Tanks appeared  at 1130 h, he fired again and destroyed another tank. Next two days ,there was heavy shelling and air attacks but 4 Grenadiers held firm. On 10 September, the enemy launched another Armour attack. CQMH Abdul Hamid moved to the flank. He destroyed two leading tanks with accurate anti tank fire and swiftly changing position. CQMH  Addul Hamid was spotted by other enemy tank in support role. Undeterred he destroyed yet another tank but was mortally wounded by intense Tank main gun and Machine gun fire of following Tanks. His gallant action inspired his comrades to put up brave fight and beat back the heavy armour assault . Pakistan Armoured Division was also ambushed by the Deccan Horse and 3 Cavalry, it suffered heavy casualties and abandoned the offensive in this sector.

CQMH Abdul Hamid’s complete disregard to personal safety during operation and sustained acts of bravery in the face of constant enemy fire, were a shining example not only for his unit but whole Division. For this gallant act, he was awarded the “Param Vir Chakra” posthumously.

The misadventure of Pakistan Army proved to be a total disaster. Pakistan suffered heavily in terms of men, war machines and material. It is estimated that almost 6000 Pak soldiers were killed and 475 tanks were destroyed. We also suffered losses. 2700 Indian troops made supreme sacrifice and 80 armoured fighting Vehicles were lost. India returned all occupied territories including strategic Haji Pir Pass . The best reward of September War was that Indian Army got rid of the ghost of 1962 debacle and regained its status a strong Regional Military power.