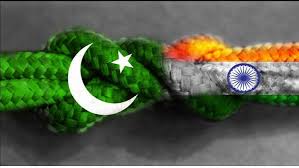 In the seven decades since partition, Pakistan has proved to be a most intractable neighbor for India. It has adopted a posture of conflict, created issues where none exist and simply refused to see reason.

Four full fledged wars against India, which resulted in ignoble defeats for Pakistan, have not deterred that country’s leadership from pursuing a policy of unmitigated belligerence against India. All placatory attempts are looked upon as a sign of weakness leading to more vigorous pursuit of inimical policies.

In an attempt to export terror to India on the basis of an inherently flawed “policy of a thousand cuts,” Pakistan has itself become a hotbed of terrorism. The Frankenstein monster nurtured with the intention of weakening India is now poised to devour the country. Despite suffering immense violence and loss, there is no effort to admit the fault line and take corrective action.

International pressure and a resounding defeat to its “policy of a thousand cuts,” are, by far, the most significant contours of this very complex issue that can possibly impact Pakistani thought process and channelise it toward a modicum of moderation.

In the international domain, Pakistan has become a pariah with most nations, especially long term ally US, insisting upon tangible action to curb the militants (read terrorists). Yet, there is no sign of remorse or concrete steps in this direction; instead, the leadership continues to remain in denial mode, insisting that the country is also a victim of terrorism. What is being conveniently forgotten is that the situation is of its own creation.

The country would have been in dire diplomatic straits had not China moved in to cover the lost ground. China was earlier a silent spectator insisting on Kashmir remaining a bilateral issue. In recent times it has considerably changed its posture, mainly due to its investments in the China Pakistan Economic Corridor (CPEC). Thus, what Pakistan has lost in the form of support from the US it has compensated in a larger manner from China.

India needs to be ever alert to the international dynamics so as to build a credible, fact based perception in the global community of the Pakistan problem and its impact on the country as well as the world at large.

The security forces have been exerting relentless pressure on the terror machinery operating in Jammu and Kashmir, especially the Kashmir Valley. In the year 2017 more than 200 terrorist have been killed in incisive counter terrorist operations. Now, the imminent break down of the carefully structured and nurtured terror machinery is causing panic among the terror strategists including the ISI and warlords like Hafiz Saeed.

As the end of terrorism nears the desperation to keep the semblance of a presence intact has led to some daring attacks of the type witnessed in recent times in both the Jammu and the Kashmir region. More such attempts will definitely be made in days to come.

It is necessary to accept that the adversary is proficient in what he does, howsoever, evil it may be. There are bound to be casualties in Fidayeen (suicide) attacks, the only recourse being to reduce them as much as is possible.

While cutting the losses that the enemy is determined to inflict, there is a need to develop a stoic resolve of absorbing such losses that are inevitable. A stringent outburst by the media and a mindset bordering on passivity is just what Pakistan wants as the end result of the terror strikes. It is therefore imperative to not give the adversary the pleasure of seeing the nation in a state of frenzy.

Of particular significance is the challenge posed by anti-national voices emanating from the Kashmir Valley. They serve as the elixir on which the cult of terrorism is being sustained by Pakistan.

The Kashmiri people do not have much love for Pakistan! Ever since the emergence of the Pan Islamic ideology, many in Kashmir consider Pakistan as opportunistic and not genuinely interested in the region’s future. Besides, Pakistan’s falling status in the world is known to all. Kashmiri youth do not want to emulate Pakistan as is quite evident on the social media.

The aforementioned factual thought process needs to be leveraged by India. The message should permeate to all actors in the international as well as the domestic circuit. The inherent hollowness of the romanticism that Pakistan wishes to create about heavenly existence of Kashmiris in an Islamic society under its patronage should be exposed.  India also needs to step up the political process in Kashmir by increasing the engagement threshold and exposing the perfidy of the Pakistani state.

There is a need to honestly introspect on the capacity of the nation to understand as to what makes Pakistan tick. India responses are based more on emotion and less on information. All the panelists who wax eloquent on Television channels or the columnists who inundate the print media with articles on Pakistan have very less to offer in terms of hard, real time facts.

The advocacy ranges from the soft power approach of talks, engagement, cultural exchanges and dispensation of big brother largesse to the hawkish tit-for-tat in ceasefire violations, surgical strikes and even outright war. All of these have been tried and tested at some point in time but have failed miserably, thus highlighting the need for some out-of-the box thinking!

India’s Pakistan policy needs to be based on well thought out parameters which are constantly aligned and adjusted to the evolving situational dynamics. It is only a clear understanding of the enigma that is Pakistan that can convert the response threshold from reactive to proactive.