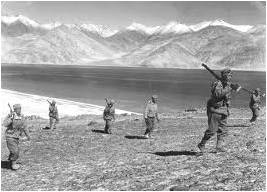 October, 20, 2012, will mark the 50th year of the Indo-China war. The current national preoccupation with corruption and incessant attention to other tomfoolery that keeps the modern Indian society busy has resulted in a miniscule level of attention to this historically very important event. Another reason for this important event being sidelined is the very obvious apathy of the central government. Instead of confidently talking about the issue, it is bent upon taking an ostrich like approach. One wonder as to what our leaders are trying to run away from and why.

It seems that the apathy of the centre has rubbed down upon the State of Jammu and Kashmir also. Not a word on the subject has been spoken by the government, the political leadership, the intellectuals, the academicians, the civil society or anybody else. Even the local media has been indifferent to the cause of an important geographic segment of the State. While some local newspapers have carried articles on the subject written mostly by people from outside the state and giving more of a national than a local perspective, a majority has not touched the matter at all. Very obviously, what does not interest the government does not interest the newspapers also; so much for an independent media policy. This is quite incredible since a major part of the action took place over there.

Not much can be done in Ladakh itself given the fact that the region, unlike the other major cities of Jammu and Srinagar, continues to be bereft of even rudimentary media presence. Sadly, the local newspapers being published from both capitals of the state do not even have correspondents in the important township of Leh and Kargil let alone an office. The same can be said for the national dailies, television channels, FM radio channels etc. The media initiative, therefore, was required to emerge from the national and regional assets and this has not been forthcoming.

Politically, the lack of interest of the separatist Kashmiri leadership does not come as a surprise considering that it remains habitually unconcerned with what goes on north of the Zozilla pass and south of the Banihal tunnel. However, this was not to be expected from the mainstream local parties. The National Conference and the Congress, being in power and running the government, have a moral obligation to respond at this historical moment; that the government has not done so amounts to abjuring of responsibility.

Why is it important to cover this historical event? There is a need to send a clear message that our great nation may have temporarily lost some territory but overall the moral victory was ours and we as a people cannot be deterred by the evil and inimical designs. For this a good start would entail paying homage to the brave soldiers who fought against impossible odds and preferred death to leaving their posts. There can be light and sound shows, exhibitions, documentaries, brochures, comics, street show etc highlighting their bravery; their next of kin could be invited to the places where they fought and honoured. Next, the brave people of Ladakh who did not flee in the face of the Chinese onslaught and instead chose to support the army in its epic battle can be commended in a manner that all other Indians learn a lesson in nationalism. This occasion provides the most apt platform for open intellectual discussions in the form of seminars, debates, presentations etc. The thrust could be on independent assessments of the prevailing security situation, identification of the loopholes and ways and means to plug the same. In this, involvement could be extended beyond the people of Ladakh to encompass other parts of the State and onwards the nation.

The silver lining is that some determined journalists, writers and thinkers have kept the candle alight by writing on the issue. Such articles have been carried in the edit page of some national dailies and on the internet; a few defence magazines have also given the matter a little space. The television will, of course, go for a breathless debate for a few minutes on October, 20th before quickly getting back to Kejriwal. Many different perspectives have been thrown up from what has been written and carried; did we actually lose the war as is widely perceived? In the aftermath of the debacle have we emerged stronger as a nation or are we still faltering? Are we prepared for a similar misadventure by inimical forces in the future? How should the future relationship with China be seen?

Like many other nations India also holds a huge parade on the occasion of Republic Day as a show of strength and solidarity to the world in general and our enemies in particular, However, parades are not the only medium where such a message can be sent out; occasions such as this 50th year of a immoral war against the nation and the manner in which the adversity was overcome provide an excellent platform to send across a message of nationalism. This is also a good opportunity for the people of Jammu and Kashmir to show solidarity with their fellow citizens of Ladakh. How else can the state demonstrate its homogeneity in the face of the prevailing ethnic and geographic diversity? The entire nation, with motivation emanating from the central government, should have given due importance to this significant moment in our history, that the same has not happened gives all the more reason to the State government to be more forthcoming since it is a direct stake holder. There is a lot that could have been done, should have been done and can still be done starting from October, 20 when war was declared and ending on November, 21, when the Chinese withdrew unilaterally. Here’s hoping that some positive initiative will come by soon enough.