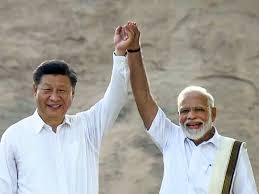 Prime Minister Narendra Modi and President Xi Jinping are world leaders of great repute. They are also seasoned politicians who keep the interest of their respective countries above everything else. Against this backdrop, the “Informal Summit” between the two leaders at the Indian coastal town of Mamallapuram, Chennai, certainly had more on the cards than building a personal friendship with a liberal dose of art and culture thrown in.

The two leaders are gravitating towards each other to offset growing challenges that they are facing both domestically and in the international arena. Domestically, both are looking at an economic downturn in their respective countries.  Internationally, China does not wish to see India leaning towards the United States and India does not want China to aid Pakistan, especially so, in the matter of Kashmir.

It seems that there was some positive interaction between the two at Wuhan which has resulted in taking the conversation forward.

That it had the required effect becomes apparent from the rushed visit of Pakistani Prime Minister Imran Khan to China before President Xi Jinping’s visit to India. Such was the anxiety being felt by the Pakistani establishment that Khan was accompanied by the Army Chief, General Qamar Bajwa. Many, of course, would suggest that Prime Minister Imran Khan, in fact, accompanied the Army Chief to China, the latter having a need to  allay fears about Chinas position on Kashmir. The Pakistan Army is well aware that it cannot survive without Chinese support in this matter.

The prelude to the informal summit witnessed flare up of tensions between the troops of the two countries that has, by now, become a tradition. This time round the action took place on September, 12 and the venue was the northern bank of the 134-km-long Pangong Tso Lake in Eastern Ladakh. The mater died down after the necessary theatrics had been performed. What the Chinese gain from such infantile posturing, especially when the visiting dignitary is of the stature of President Xi Jinping is anybody’s guess. The matter, as usual, was ignored by the leaders in their conversations.

Coming back to the takeaways from the summit, on the flip side, no progress was made with regard to the longstanding border dispute between the two countries. As a result, India needs to continue with a high state of vigilance and remain prepared in view of the burgeoning military might of the neighbouring country.

On Kashmir, there has been a thaw in the hard position adopted by China. Certain statements emanating through diplomatic channels of the country are terming the issue as a “bilateral dispute between India and Pakistan, to be resolved by the two sides through negotiations.” Official sources confirmed that Kashmir was not discussed by the two leaders, even as they agreed to work together to deal with the challenge of terrorism.  The new position adopted by China constitutes a significant departure from the earlier posture and is possibly a result of New Delhi allaying certain fears that China harbours with regard to the borders. Pakistan would be quite disconcerted by this unexpected turn of events which further weakens heir position on Kashmir.

Trade and economics predictably dominated the talks! Prime Minster Modi went well prepared and determined to get certain concessions that would lead to a reduction in the ever increasing trade deficit between the two countries. President Xi Jinping responded positively with assurances of increase in tourism, pharmaceuticals etc. There was agreement to establish a “High-Level Economic and Trade Dialogue to deepen economic cooperation; achieve enhanced trade and commercial relations and better balance of bilateral trade.”

China, on is part, is looking for permission for its companies, especially Huawei, to invest in India, and also wishes to see India joining the China-led Regional Comprehensive Economic Partnership (RCEP). Experts are of the belief that India cannot afford to ignore an Asia centric free trade agreement and hence the Modi government may accede to the demand in time.

It is notable here that China has launched a huge propaganda war against the United States that is largely centric to the Indian Sub-continent. Islamic nations like Pakistan and Bangladesh are terming news of Chinese repression of its Muslim population as a product of US engineered misinformation. “As a part of the propaganda war, they (US) have now employed the media outlets to make the Islamic world hostile towards China by spreading fake news of so-called Muslim oppression in the country,” says Mohd Enamul Hassan in an article published in the Global Times. Hassan is a Bangladeshi journalist who has done a fellowship at the Beijing based Communication University of China. India will need to be vigilant to not fall in a similar propaganda trap laid out by China and will need to nurture the good relationship with the US alongside of the positive developments on the Chinese front. The US, on its part, would do well to understand the emerging dynamics in the South Asian region. In case it wishes to get assistance from India to balance out China then it will need to show more compliance in trade talks and other concerns that India may have about China.

Notwithstanding the growing bonhomie with China there is much for India to be wary about. First and foremost is the Chinese reluctance to ease out on the borders; India simply cannot reach out to China as a friend till the border dispute is not settled in letter and spirit. Chinese support to Pakistan has an element of flip-flop diplomacy that continues to generate unreliability in the relations between the two Asian giants. The fact that Pakistan continues to get Chinese assurances of a “Harmonious Relationship” along time tested lines is something that India cannot ignore.  An acid test will come by with the Chinese reaction to Pakistani mischief when the reorganisation of J&K two Union Territories is implemented. The manner in which things play out will indicated the success or failure of the Mamallapuram Summit. The last word here is that India needs to continue resisting Chinese attempts to dominate Asia while building a relationship based on equality with the country. To summarise, though the Mamallapuram Summit had a positive spin-off much needs to be done to get Indo-China relations on to a desirable level.

(Jaibans Singh is a geo-strategic expert, columnist and author)