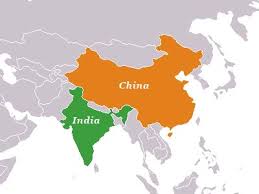 A leadership change took place in China in March, 2013; this was a once in a decade transition. The recent parliamentary elections in India gave a clear majority to a single party with a strong leader – Narendra Modi.  It becomes quite evident that incumbent governments of the two Asian giants will be dealing with each other for a sustained period of time. Foreign policy does not see drastic changes with a change in leadership, yet, personalities and perceptions do play a major role. So it will be with India and China.

While dealing with bilateral issues that hinge on trade and a debilitating border dispute the two countries are also interested in maintaining their regional and global interests. In this regard, the undercurrents are palpable.

Prime Minister Narendra Modi has realised the need to offset some of the influence that China has managed to garner in the immediate neighbourhood due to its economic muscle and an unfortunate “couldn’t care less for the poor cousins” attitude of the outgoing UPA government towards the neighbouring countries.

Prime Minister Modi’s choice of Bhutan and Nepal as his first two foreign visit destinations is based on an assessment that the countries can be drawn out of the stranglehold of the Dragon. The common perception is that he succeeded to a great extent.

Prime Minister Modi’s visit to Japan may have a personal motivation of friendship but here also lingered the need to get the “outer string of pearls” in place. The nationalist approach of the Japanese premier, Shinzo Abe, manifests itself in his determination to find a counter to Chinese belligerence through strategic alliances. Creation of a Japan-US-India alliance is just what he wants to further his objectives. The highly successful visit by Prime Minister Modi to Japan would have given a considerable boost to the strategic objectives of the Japanese government. The flip side is that it would have raised a considerable degree of concern in China.

Sri Lanka and Bangladesh are two more neighbouring countries that India now needs to look at for enhanced bilateral engagement with China in mind.

Sri Lanka is not very happy with India for its stand on the United Nations Human Rights Commission on accountability of the incumbent government in the matter of war crimes against the Sri Lankan Tamils. China has been quick in taking advantage of the situation and has entered Sri Lanka in a big way both politically and economically. It has signed a Strategic Cooperative Partnership (SCP) agreement with Sri Lanka and cemented sea based access in what is being termed as the ‘Maritime Silk Route’ (MSR) through the Indian Ocean. India is, quite naturally, worried; it is common knowledge that every economic activity that China indulges in has a long term strategic consequence in power projection.

The Prime Minister of Bangladesh, Sheikh Hasina, visited China in June this year; significantly, this was her second visit as head of state in four years. In accordance to its time tested policy China has launched an economic torrent in Bangladesh. It came up with massive proposals for development of infrastructure in the country; it has also given broad hints at improving upon Bangladesh exports by channelling them towards its growing domestic demands. This is what Bangladesh needs most at the moment.

Bangladesh is leaving no stone unturned to attract China; there is talk of a separate economic and industrial zone in Chittagong for Chinese investors with special privileges in export processing zones of the country.  Bangladesh is also extending support to the “one China policy” with regard to Taiwan, Tibet etc. Such an approach by Bangladesh goes against what India and the Asia-Pacific neighbourhood stands for.

Japan is determined to offset Chinese influence in the region. Immediately after Prime Minister Modi’s visit the Japanese premiere, Shinzo Abe, embarked on a visit to Bangladesh and Sri Lanka. He called Bangladesh and Sri Lanka “countries with a growing influence in economic and political domains” and stated that the visit was meant to boost “economic and security” ties. The timing of the visits says a lot about how India and Japan intend to exert their partnership and create the requisite influence.

The Chinese President Xi Jinping will visit India in September. As a prelude, Commerce Minister Nirmala Sitharaman and National Security Advisor Ajit Doval have visited China. Ajit Doval is also India’s special representative for the India-China border talks. The preparation leaves no doubt about the agenda that the two leaders will pursue during the visit. Business, trade, border dispute, power play, strategic issues et al will be on the table for discussion. The writing on the wall is very clear. India is not likely to sit back and allow unfettered build-up of Chinese hegemony in the neighbourhood. China, on the other hand, is determined to create and maintain regional supremacy commensurate with its growing status as a world power. China is not likely to dilute its strategic outreach and will yet look for business opportunities to engage India with. India’s latest foreign policy overtures will also draw tacit engagement.

In order to engage China on an equal footing and to safeguard the Nations strategic interests India needs to enhance its military threshold on a war footing. There is no language that the Chinese understands better than the language of military might. Japan understands this and is working assiduously in creating the requisite military might through alliances. India being a larger country that has a long and disputed border with China needs to build military might independently apart from being part of an alliance. India cannot match up to China militarily; the minimum requirement is to make the cost of a conflict too steep to be considered as an option. To this extent India has to look at its diplomatic and military management with China with extreme sensitivity and caution. Military might will always remain the bottom line.