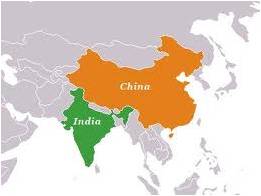 Mention China and India to economists and their first thought will be rapid growth, and second, how differently the two economies are achieving this. China took the conventional route of manufacturing led growth and is now recognised as a global leader in manufactured exports. India followed the unconventional route of service-led growth and has acquired a global reputation for service exports. It seems now that their growth patterns are converging; China catching up in services and India catching up in manufacturing.

History has proved that whenever two rising powers sit next to each other chances for conflict increase greatly as their growing spheres of influence quickly overlap. This is, unfortunately, becoming increasingly visible in Asia where a rising China and a resurgent India have begun to claim influence over the same regions. After India and Vietnam agreed to jointly explore oil in the South China Sea, a Chinese newspaper accused India of “poking its nose where it does not belong.” China is busy creating alliances with India’s neighbors, while India has, to China’s dismay, begun to strengthen ties with its competitors- Japan, Australia, and the United States.

Yet another important arena is the India-Pakistan-China triangle. There are some very serious concerns being expressed about the effect on the India-Pakistan military balance due to the successful launch of the Agni-V as well as India’s increasing arms purchases. Given that Pakistan figures prominently in China’s strategy to strengthen its presence in the Indian Ocean, The country is highly unlikely to allow India to curtail or influence its activities in Pakistan. In this context, it is probable that China would provide some kind of support to Pakistan to maintain strategic parity between the two countries.

According to Yan Xuetong, a professor at Tsinghua University, although in the past China has been dismissive of India and unwilling to accord it ‘great power status’, the 2005 announcement of US-India civil nuclear cooperation made it take India more seriously. China fears that US-India civil nuclear cooperation can spillover into military cooperation as well. China could be looking at this within the broader context of a US-led `strategic encirclement and containment of the Nation.

The United States also has its own set of dynamics with China. These have a basis in a palpable American anxiety and Chinese aspirations since China is the biggest market for the US. The US is extending its Asian connections while looking at a larger presence in the Indian Sub-continent. Asia is thus likely to present a highly complex scenario. The ‘Indo-Pacific’ will be the arena of the 21st century’s geopolitical and geostrategic manoeuvres. This space, where the US will engage with Asia, may carry the danger of completely marginalising the smaller powers.

Notwithstanding the foregoing and despite a background of palpable mistrust, political confrontation and turbulence in bilateral ties, there has been a perceptible improvement in the atmospherics between India and China. In 2009, India’s ambassador to China S Jaishankar set the ball rolling by listing out New Delhi’s expectations from Beijing.”What are Indian expectations of China at this stage? I would sum it up as displaying sensitivity on what matters most to Indians, while accepting that we cannot agree on all issues just yet… It is important as well to keep reminding ourselves that India and China continue to have a substantial convergence of interests,” he said. He further added that the border dispute should not be “allowed to impede either functional bilateral co-operation or convergence on global issues.”

At the Copenhagen summit that followed, China demonstrated a strong bonding with India to ensure that developed countries do not extract unilateral concessions from the Asian neighbours. “India and China have to cooperate. There is no way out. There are global and multilateral issues on which the two countries have to cooperate and not let differences interfere in the main momentum of bilateral ties,” said Wang Yaodong, South Asia Bureau Chief of Chinese newspaper Wen Hui Dail, after the summit. Significantly, the global economic downturn has also forced developed nations to recognise the potential of the two countries and attempt to bring them together on some common economic platforms.

Happily, the momentum in trade has not slowed down. China remains India’s largest trading partner, with bilateral trade surpassing $40b. There has been a recent ban on Chinese toys, clampdown on Chinese cell phones in the grey market but rather than being seen as stumbling blocks these are seen as a part of the growing trade engagement. Experts, however, caution against allowing protectionist tendencies to set in.

The Indo-China situation has been aptly defined by C Uday Bhaskar, “We have to accept that there are constraints. But at the same time we can’t perpetually believe that US is the only landing port for both India and China. We need to depend on each other’s economies as well.”

India must never lose sight of the fact that it is now required to position itself globally in relation to two powerful states, one distant and the other in the neighbourhood. For this, it will require some dynamic strategies. How should India position itself? Strategic autonomy makes sense for India as an emerging power in a quasi-multi-polar world, for maximizing its own options. BRIC is a possible roadmap for a new international system but not an endpoint as other powers are also waiting in the wings. India should, thus, pay greater attention to other emerging powers, since it enjoys a positional maneuverability. At the same time the perception that India and China are enemy nations has to be vigorously dispelled, the work to bring about a negotiated settlement of the border dispute needs to continue while focusing on the positive areas. Military strength is, of course, the biggest guarantor of peaceful coexistence. The fact that both countries have vibrant markets and can cooperate in many areas should never be lost sight of.