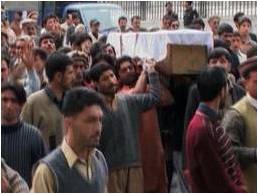 After more than six decades of independence, there are a million plus citizens of India who are languishing under foreign occupation, being suppressed, humiliated and exploited by mercenary forces for economic gains. This statement may come across as ludicrous to all those who are unaware about the state of affairs in the Gilgit-Baltistan region of Jammu and Kashmir. This region was a part of the princely state of Jammu and Kashmir at the time when the erstwhile Maharaja of Jammu and Kashmir signed the instrument of accession. Due to some misplaced ideals of the then Indian leadership, the region was not liberated by the Indian forces during the Indo-Pakistan War of 1948. Intervention by the United Nations led to a ceasefire and a huge mass of land was forcibly occupied by Pakistan and renamed as Northern Areas (NA’s).

Ever since, this area has been forcibly ruled by Islamabad despite the fact that it is not constitutionally integrated with Pakistan and its people do not have representation in the National Legislature. Having received this bonanza without effort Pakistan set about misusing it as a tool to further its political, economic and strategic objectives; as time passed the covetous Punjabis of Pakistan realised the immense economic potential of the region and let loose massive exploitation after gaining control of all assets. Governments and political dispensations in Pakistan changed over time but the policy towards the NA’s remained unchanged.

In the last 64 years, no less than 11 political systems have been experimented upon these hapless people. Recently, the Government of Pakistan through the enactment of the Gilgit-Baltistan (Empowerment and Self Governance) Order 2009 of August, 29, 2011, designated the region as an integral province of Pakistan. In accordance with this legislation, the Governor of NA’s will head a 12 member council with 50% members from the Assembly and the remaining 50% appointed by the Governor himself. This caveat by itself reduces the position of the Chief Minister to that of a dummy. Also the Legislative Assembly will have no control over defence and treasury. This devolution, which is the result of a protracted political movement of the people of this beleaguered region, clearly falls short of their justified aspirations and is being vigorously contested.

Even as the Pakistani political leadership and Army continues their mischievous machinations the plight of the people is going from bad to worse. The region, which is supplying electricity to both Pakistan and China, has 14 to 16 hours outages on a regular basis because defective transformers cannot be replaced due to lack of funds. The area is rich in minerals, yet, the locals are banned from mining; the right has been given to neighbouring provinces and to the Chinese. More than three lakh ethnic educated people are jobless and yet the people are not getting adequate government employment; there is not a single local Judge in the entire Province. On the other hand, Pakistani government officials posted to the area draw double salary. The few local government employees do not get salaries for months on end.

Natural disaster like floods and earthquakes add to the misery of the people. Schools, hospitals and other infrastructure damaged due to natural calamities is not repaired for years. Dilapidated poultry farms are being used as schools. No compensation is paid to people who lose their homes and belongings in such calamities. No subsidy is given to tide over bad times.

The people are raising their voice against this blatant oppression. Spontaneous mass uprising with thousands, sometimes lakhs of people taking to the streets is a common occurrence. Sadly, with a total population of about 1.4 million these poor impoverished people cannot stand against the combined might of the Pakistan and Chinese establishments. The Police and the Army do not hesitate from opening direct fire on demonstrators; there have been instances where entire villages have been detained; sedition charges are slapped against local leaders with impunity.

Yet another matter of great concern has been raised by a report titled “Pakistan’s Deteriorating Situation, Strained Relations with America: Deliberation on Leasing Gilgit-Baltistan to China for 50 years”, published in a local Urdu newspaper of Gilgit-Baltistan, Roznama Bang-e-Sahar. It is being contended that Pakistan is poised to hand over the region to China on lease for fifty years due to certain strategic and economic considerations. The move has the complete support of the Pakistan Army. It goes without saying that such a development will spell disaster for the people of the region. Clearly the list of miseries of the people of NA’s is endless; they are at the mercy of exploitative forces and are facing a situation of institutionalised slavery.

Pakistan’s occupation of NA’s is illegal and forceful. Nevertheless, the question of political status can be dealt with separately. The most important and immediate requirement is to ensure that the people can lead a normal, dignified life. Pressure has to be built on Pakistan to cease its blatant exploitation of the region and also put a lid on China’s greedy ambitions. Pakistan has to be prevailed upon to restore political rights of the people, release all political prisoners, grant freedom of press and create local autonomous governing bodies. Restoration of people to people ties in the contiguous regions of Ladakh and Kargil and opening of trade and transit routes also needs to be pushed.

In 1971, India gave moral, material and military assistance to erstwhile East Pakistan against exploitation by West Pakistan and was responsible for the creation of a new nation – Bangladesh. Against the backdrop of such moral standards it is surprising that the nation is not reacting to the sad plight of its own people. The need of the hour is to set aside diplomatic compulsions for the sake of humanity.