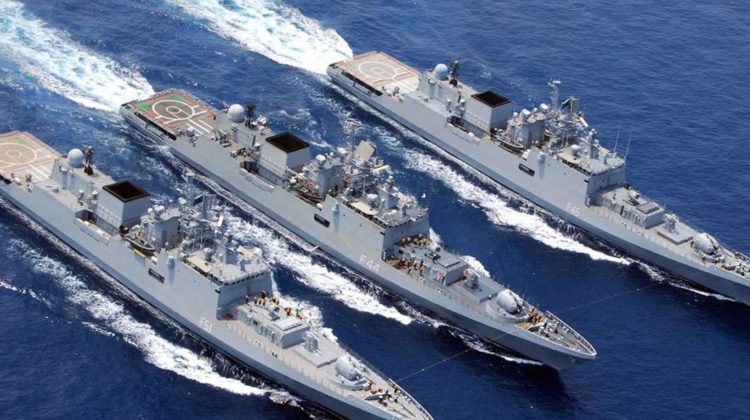 History is testimony to the fact that any ruler who went on  to become an emperor always had a strong Navy. The one, who conquered the blue waters, conquered the world. India was a super power in the ancient times. The Chola Navy was considered one of the strongest navies of its time and one of the major reasons behind the Chola’s economic supremacy. Supremacy of Navy stands true even in the 21st Century. If India has to become a super power again in 21st Century, it will have to build a blue water Navy capable of dominating the Indo-Pacific Region

The Indo-Pacific is increasingly becoming a geo-strategic focal point on the globe. The Indian Ocean Region (IOR) holds great relevance in the emerging world order of 21st Century, in terms of economic growth, natural resources, as well as major sea lines of communication. Being geographically and economically central to the IOR, any geo-economic contestations will have a huge impact on India. While China is aiming to secure access to strategic ports to gain an economic and strategic advantage, India’s role in the region is increasingly seen as a protector of the international order, particularly as it pertains to maintaining open sea lanes and the freedom of navigation.

India needs a modern Navy to protect its maritime interests and shoulder additional responsibilities, particularly in the current geo-political and security situation that prevails in the Indo-Pacific Ocean Region. The aim of the expansion plan of Indian Navy is to govern the two oceans, The Indian Ocean as well as the Pacific.

Navies are not built in a day, they require consistent efforts and thus, the Indian Navy now needs to transform from a ‘Buyer’s navy into a Builders Navy’. One of the major challenges for Indian forces, of course, remains  the budgetary support. The reasons for this build up are several and could be summarised as under-

The Navy is striving to address the capability voids in areas such as aircraft carriers, tankers, landing platform docks, mine countermeasures vessels, submarines and integral helicopters. We are also enhancing our surveillance capabilities through induction of long-range maritime reconnaissance aircraft, integral helicopters and high-altitude long-endurance aircraft or remotely piloted aircraft. The focus has been to augment capability through induction of modern platforms, weapons and sensors. India also need to enhance it’s ability to conduct surveillance and maximize its maritime domain awareness.

Some baby steps have been taken by Indian Navy towards Blue Waters, however, the national focus on blue waters has to go beyond rhetoric and start action on ground. As part of modernization, induction of maritime missile technology further enhances the Indian Navy’s potency. The 300 km BrahMos medium range cruise missile and the 350 km Dhanush (Prithvi II adapted) ballistic missile are noteworthy additions to India’s armory.  The Dhanush ballistic missile is capable of being launched from both ‘on water’ as well as ‘under water’ assets.  Also equally important  is the successful testing and impending installation of 1500 km range Sagarika ‘Oceanic’ missile on the INS Arihant. Add to this India’s successful testing of the 3500 km range Agni III ballistic missile (with work underway for a submarine launched version) and it puts both Pakistan and China even more firmly within India’s nuclear sites. Recently, India has quietly commissioned its secretive nuclear missile tracking vessel called the VC 11184, entering a select league of nations with the capability to monitor missile launches at long distances, enhancing the testing programme and adding a crucial part to a national missile defence system. The underwater capabilities of India needs greater focus as the submarine fleet is aging(1980 vintage). Acquiring of  third Russian Akula class nuclear powered attack submarine will enhance the underwater capability to some extent. 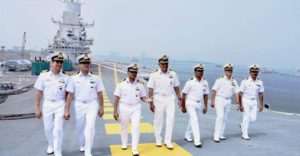 Role Of A&N Command.   India positioned it’s first tri services command at Port Blair, Andaman & Nicobar island . The primary aim was to   protect  its strategic interests in the Strait of Malacca but aim plus was to  place a command and communication structure at the islands,  with reasonable logistics facilities. This could be augmented, whenever needed. This tri services command will act as fulcrum for Indian Navy operations and also friendly naval forces, in the Indo-pacific region. The need was well established during joint multinational exercises. Presently, India continues to use   it   as a logistical facility for supporting the navy’s deployments in East and Southeast Asia. The role can be suitably enhanced when the need arises.

Offshore Bases.   India is increasing it’s footprints in the blue waters of Indo-Pacific Ocean region. Strategically located islands in the Indian Ocean  are crucial for domination of blue waters and safeguarding the country’s maritime natural resources.  These islands also provide an opportunity for coordinated and joint anti-submarine warfare missions for both the Indian and the Pacific Oceans. India has negotiated agreements with several states in the littoral IOR to obtain military access to their bases.    India has also engaged   France and the United States through logistics agreements, which grant India access to port facilities at the U.S. base on Diego Garcia and the French base on Reunion Island.

Agreements and understanding with Australia has been reached to use Cocos islands for joint naval surveillance of sea routes. Cocos Islands,   fall right in the middle of sea trade routes.  The Indian government has setup listening posts and established Naval surveillance facilities in Madagascar and Mauritius. The small, remote Mauritian island  called ALAGELA,   is currently being developed as an air and naval staging point for surveillance of the South-West Indian Ocean.  In recent years, India has sought to further develop its military access to the south-west Indian Ocean by building logistics base on Seychelles’ remote Assumption Island. There is similar arrangement with Japan which provides India access to naval facilities at Djibouti.

Maritime Collaboration    India has also held multilateral naval exercises   in the Andaman and Nicobar Islands with 16 other countries   and in the Rim of the Pacific Exercise (RIMPAC), sailing alongside the Australian, Japanese, and U.S. naval forces.    Maritime collaboration and multilateral naval exercise with QUAD member countries, conveyed the right signals to the world about emerging alliances, in the new world order.

India is set to be a significant player in the global maritime pecking order for the 21st century, with a substantive ‘blue water’ navy ready for  operating in various long range deep water settings. As per Maritime Capability Perspective Plan, the Indian Navy aims to have 200 ships, 500 aircraft and 24 attack submarines, they said. At present, the Navy has around 132 ships, 220 aircraft and 15 submarines.   We also require at least three aircraft carriers. The Navy has been requesting for additional funds since long to  become battle-ready for blue waters.  The focus should be rapid capability expansion that is anchored in indigenous construction, self-reliance, public and private sector participation, and it’s called ‘nation building through shipbuilding’. However, apart from counting numbers, focus should be on capability enhancement.

The Indian Navy, which is the flag bearer of India’s maritime power, needs to transform itself to become capable of governing two oceans, the Indian Ocean as well the Pacific. India is now cautious that it cannot allow China to dominate  IOR  like it has done in  the South China Sea and challenge territorial claims and international norms in the IOR.

After a neglect of almost half a century, a strong strategic maritime build up has been evident since the beginning of 21st Century.  India entered the 21st century with a small but formidable regional naval posture. Govt of India took strong policy decisions to increase funding for warship construction in order to build ‘blue water’ capability for the Indian Navy. This was facilitated by India’s strong economic performance in the last two decades.

Indian Navy is the key instrument of power for India as emerging Super Power.  A strong and professional Blue water Navy can contribute   to   power projection,   within the Indo-Pacific Region and  the   world. The Indian Navy with its current professionalism and future plans has the potential to enhance Indian image as a super power, in the future.  The Indian Navy has created   a niche for itself by   exhibiting its   professionalism and contributions towards nation building. The grateful nation acknowledges it with standing applause and salutes the Sea Warriors on the NAVY DAY-04 December.