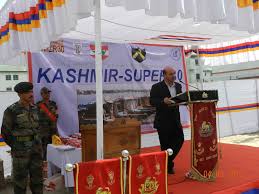 Fifteen students of Jammu and Kashmir coached under the Super 30 programme sponsored by the Indian Army, as a part of its two and a half decade old welfare initiative – Operation Sadbhavna,  have cleared the prestigious JEE (Mains) 2016 competitive examination.

This initiative by the Indian Army was launched in 2014. It is based on the model of the Super 30 in Bihar that has attained global recognition. The Kashmir Super 30 is being run in partnership with the Centre for Social Responsibility and Leadership.

The initiative was launched in a modest manner with less than 30 students in the first year. Care was taken to select those who were from the lower strata and had the requisite academic acumen to be able to take on the challenge with necessary coaching. Of these, one cleared the IIT-JEE Advanced examination and as many as 17 found seats in other prestigious Engineering Colleges, an impressive beginning by all standards.

Buoyed by the success, the army selected 36 students in 2015. Three cleared the IIT entrance and 27 more were eligible for admission in various Engineering Colleges within and outside the state.

The impressive tally of the current year reflects the dedication of those who are imparting training and the hard work put in by the selected students.

The result gives a clear indication that students from Jammu and Kashmir, especially so the Kashmir valley, have the capacity to compete with the best in the country. What is important is provision of the right platform.

In times of political turbulence, the first to take a hit is the social indices. Jammu and Kashmir was no exception. Both the economy and infrastructure of the state took a beating during the period of peak terrorism. It was at that stage that the Indian Army initiated Operation Sadbhavna with the intention of ameliorating the suffering of the people, especially so in the remote areas of the state.  The intention was to offer a helping hand to the people left wanting in terms of civic and social infrastructure due to no fault of theirs.

Reconstructing the image of the security forces in the mind of the common man from the ogres that they had been painted into to the positive performers and builders that they actually were was, no doubt, an additional goal.

During the times of peak terrorism most of the government schools ceased to function, especially so in the Kashmir valley. The Army, under Operation Sadbhavna, opened a number of Army Goodwill Schools, mostly in remote inaccessible areas of the State, with the intention of providing quality education for a nominal fee to the deprived children. The Army, through this effort, not only provided education in areas that were un-serviced but also generated employment for trained teachers.

The Indian Army, over the years, has established more than 40 Army Goodwill Schools. Approximately one lakh students have obtained middle and higher secondary level education in these schools. The popularity of Army Goodwill Schools can be measured by the fact that there is a growing demand by the local population for opening more such schools.

Over the years, the Army has, under the ambit of Operation Sadbhavna, expanded the scope of its education initiative. What started as provision of primary education in Army Goodwill Schools has now expanded to the professional level with initiatives like the Super 30. Many other similar initiatives have led to admissions of Kashmiri students in educational institutes across the country. The army is making a tremendous effort to help students pursue higher education outside the state. Most of the students studying in Army Goodwill Schools under scholarship are being assisted in obtaining admission in institutes outside Jammu and Kashmir.

Education is simply one of many sectors where development and welfare programmes are being carried out under Operation Sadbhavna. In an effort to involve the youth in gainful and constructive activity, the Army has established a number of youth employment guidance nodes which provide the young boys and girls information regarding employment opportunities available to them.

Vocational training and women empowerment centres have been established across the state. Tours are being conducted for young and old to create awareness among the people of the state about the phenomenal growth trajectory of the nation and motive them towards becoming a part of the success story.

The focus of Operation Sadbhavna in Jammu and Kashmir is on improving the core social indices through quality education, women and youth empowerment, infrastructure development and health and veterinary care.

The locals in Kashmir, particularly those living in remote and physically disadvantaged areas, look towards the Army for resolution of their many problems. They approach the army for all kind of help ranging from building of a road to helping in availing a loan from the civil administration. The dependence on the army is explained not only by its accessibility and willingness to help but also by the promptness of its response and the element of honesty in its approach.

The Super 30 this year was conducted by the Dagger Division of the Army located at Baramullah, Kashmir. The division held a felicitation ceremony for the successful students in which Major General JS Nain, General Officer Commanding of the Division lauded the perseverance and hard work put in by the students. A salute to the Indian Army for supporting such a noble cause; it is hoped that this noble initiative will progress further and benefit the deserving students of Jammu and Kashmir in pursuing their dreams.

(Jasbir Sarai is an AAP activist and columnist)