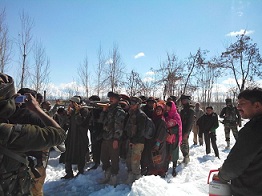 End of season snowfall in Jammu and Kashmir, especially so in the Kashmir valley, tends to be heavy and damaging. The normal time for such a snowfall is end-February; its occurrence this year in mid-March has taken everybody by surprise. The snowfall led to avalanches in a number of places. It brought in its wake disruption of communication; blocking of the national highway; wide spread power outages; damage to houses and other structures apart from loss of life

As with everything else in Kashmir this natural disaster has also been widely politicised. Separatist leaders have used the opportunity to castigate the government for not having its systems in place to deal with the situation. Their efforts towards spreading negativity have been supplemented, in no small measure, by a segment of the media. A very dismal picture of the situation on ground has been painted with only propaganda in mind.

In this cacophony of voices reeking of political opportunism, the quiet and efficient work done by the Army to ameliorate the suffering of the people went largely unnoticed and unacknowledged.

Before speaking of the manner in which the army came out in aid of the civilian population of the valley during the recent snow disaster it is necessary to understand the functioning of the army in such circumstances. In February, 2005, Jammu and Kashmir faced a natural disaster of unimaginable proportions caused by unprecedented heavy snowfall across the state. The said calamity, popularly referred to as the “Snow Tsunami” was far more widespread and destructive than ever before. The Indian army gave a sterling account of itself while dealing with the snow disaster.

Once the army goes through a process of relief and rehabilitation in a particular natural disaster it maintains a record of lessons learnt and procedures followed so as to efficiently deal with any such calamity in the future. In the case of disasters caused by a weather cycle the army lays down standard operating procedures (SOP) to be followed year after year. The same process has been in place in the valley of Kashmir ever since the snow tsunami of 2005. There have been other occasions later when this SOP has been put to good use as it was in the present case also.

Some segments of the media have made a big issue about the lack of government response to the avalanche hit village Balsaran in District Kulgam where three people lost their life. What is not being spoken about is the seven lives that the Indian Army soldiers saved at great risk to their own lives by going into the avalanche hit areas and digging out those who were buried under the snow. While three people could not be saved the remainder seven were dug out and brought back to safety. The decision to go for the rescue was taken spontaneously by the unit commander on ground (in accordance with the SOP) without any requisition for aid to civil authority.

In two other incidents, rescue teams of army sub-units located at Imamsahib and Hathipura in the Behibagh area of District Shopian evacuated two pregnant ladies on stretchers by walking incessantly for three hours in snowbound conditions. One of the pregnant ladies has delivered a healthy child while the second one awaits her bundle of joy.

During times like this the army carries out quiet unobtrusive work in all aspects that need management. When passengers are stuck due to break down of road communication the army provides hot food, shelter, blankets and medical aid; once the weather permits, the air forces flies in air sorties to evacuate the stranded passengers. When required, heavy machinery of the army assists in snow clearance, Army doctors look after the health issues in remote cut off areas, shortage of food and other essentials including petroleum products is met by army reserve stocks; whatever may be the problem the army has in place an SOP to meet the same and provide life saving relief. All of this has been going on for years on end; it does not get requisite media coverage since the media cannot reach the places where the action is taking place and the army is shy of blowing its own trumpet. Snippets of information come out when grateful locals narrate their experience to the media at a later stage.

In this particular instance also the army has done a lot which has led to the saving of precious lives, livestock and property while greatly reducing the suffering of the people.

It is quite disgusting to note the manner in which certain segments of society attempt to take political advantage from human anguish. While no mention is being made about the good work done by the army the Disaster Management Policy unfolded by the state government in 2011 is under fire; it is being suggested that the government has failed to carry out capacity building for implementation of the policy. Other media reports speak of lack of concern of the government towards the adverse situation.

It is quite sad to note that instead of uniting in a common cause to face the adversity some political leaders are leaving no stone unturned in exploiting the situation for gaining brownie points. The possibility of a foreign hand in this propagandist approach cannot be ruled out.

It needs to be reiterated that even though the Disaster Management Policy of the government of Jammu and Kashmir is in its infancy the Indian army has in place a well established policy to deal with natural disasters and it has gone about its humanitarian effort in this instance with the same efficiency as shown on earlier occasions. The JK Police and paramilitary forces deployed in the state have also put in appreciable effort towards disaster management. All of this constitutes a joint national response to the calamity; the government is an inherent stakeholder in the effort. Such humanitarian effort is not made for the sake of aggrandisement; this, however, does not divest the community leaders from their responsibility to come forward and acknowledge the good work done.