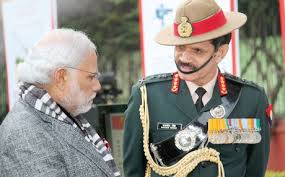 On January, 15, 2015, on the occasion of Army Day, the soldiers of the Indian Army, in a noble gesture, donated one day’s salary to the Prime Ministers Relief Fund for relief work in the flood devastated areas of Jammu and Kashmir. A cheque of Rs 100 Crore collected through this gracious initiative was presented to Prime Minister Narendra Modi by the Army Chief, General Dalbir Singh, during the traditional “At Home” function organised at his residence in New Delhi.

Army Rules empower the Army Chief to make contributions for disaster relief to funds that have been approved by the Prime Minister. The army has always remained conscious of its social responsibility; serving personnel have made such contributions on several occurrences of national calamity. In an earlier instance, one day’s salary of all serving soldiers was donated to the Prime Ministers Relief Fund in aid of Tsunami victims in 2004.

Over the years the Indian army has established a special bond with the people of Jammu and Kashmir. There would hardly be a soldier who has not served in the state at some point in time during his career span. The people and the soldiers have jointly met the challenge of foreign sponsored terrorism and brought the region back to normality from the brink of disaster. During this journey there have been many instances of calamity towards which the army has exhibited great sensitivity and has come to the aid of the people spontaneously as a friend and a well wisher.

The reaction of the army during the devastating floods of September 2014 was in line with the aforementioned ethos. Despite suffering tremendous losses and damage to its own camps, the Army placed the highest priority to rescue of stranded civilians. The soldiers and officers continued to function despite losing all that they possessed less the clothes they were wearing at the time of moving to dry land.  They worked day and night to meet the challenge.

The Army was called upon to take a leadership role in the rescue operations since the state government was rendered helpless. Its own capital city, Srinagar, was stuck in the middle of the calamity. The army took everyone along with it in managing the operation. All agencies and the people worked seamlessly, shoulder to shoulder with no thought of any personal gains. It is only the spirit of humanity that prevailed.

This was definitely not the first time that the army had come forward to render such assistance. The region is routinely afflicted with landslides, avalanches, cloud bursts, earthquakes etc.

Decades of terrorism and turmoil has had a devastating effect on the psyche of the people of Jammu and Kashmir, especially so, in the Kashmir valley. The army has been forever conscious of the devastating effect on those who have lived under the shadow of the gun. For many decades now it has put in great effort to ameliorate the suffering of the people through a welfare initiative named Operations Sadbhavna.

Army Goodwill Schools are one example of the efforts being made under the aegis of Operation Sadbhavna, they have been instrumental is meeting the pressing educational requirements at a time when government education infrastructure collapsed under the terrorist threat. In an effort to involve the youth in gainful and constructive activity, the army has established a number of youth employment guidance nodes which provide the young boys and girls’ information and awareness regarding employment opportunities available to them. Vocational training centres have also been set up to train to the local population, particularly the women, in a trade of their choice. In these centres, the teachers employed hail from amongst the local population, making them more acceptable to the people in addition to creating more employment.

The army is also making efforts to bring the state into the mainstream of the country’s growth trajectory. Education and motivational tours are organised for students and old people to expose them to other parts and people of the country. This helps build on experience, integration, confidence and motivation.

There are many other areas like infrastructure development, medical aid etc where the army takes initiative to assist the people. Whenever a demand comes from the people, especially so in remote areas, the army makes a sincere effort to do whatever is feasible.

There are endless stories of how the people and the army have joined hands top chalk out a better future for the trouble torn region because of which all soldiers of the army harbour a feeling of love and respect for the people of Jammu and Kashmir which is reciprocated in equal measure.

Nobody can understand better than the army as to what the people are going through due to this flood calamity. It is no wonder then that the Army feels it incumbent to reach out to the people of the state in their present hour of great distress. The one day collection of pay is a spontaneous reaction of the soldiers to assist their friends now when the need is the most.