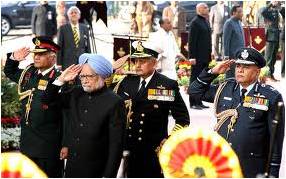 On 21 May 2009, the Government of India issued orders for non-functional financial upgradation for all Organised Group-A (OGA) civil services. With this, when one OGA officer gets empanelled at a particular post, all other officers of the same seniority shall also be moved up to the same pay level after a period of two years from the date of the first empanelment. Such officers shall maintain the status of their functional grade pay. With these orders, all organised OGA services were poised to move into Pay Band-4 within 16 years of service.

While putting forth this rather juvenile argument, our finance pundits sitting in air conditioned offices completely ignored the fact that the armed forces are not functioning in isolation. At the operational level, there are innumerable instances when Para-military forces (CRPF, BSF, ITBP etc) have to function under army formations. This is happening all the time in counter insurgency scenarios and in peacetime manning of the borders. Even in a conventional war, personnel of the Paramilitary forces would be performing defensive tasks under the command of the Army. Secondly, there are a large number of civilian establishments that provide service support to the forces; the military engineering services, quality assurance services, ordnance factories, defence research and development, to name a few. All such establishments have officers of the armed forces posted at the directional level. Most significantly, the ministry of defence has service headquarters integrated to it, whereby, bureaucrats and armed forces officers have to work in concert.

When this financial genius of our policy makers is applied on ground we have numerous untenable situations where civilian officers who are in a higher pay band have to take directions from armed forces officers who are in a lower pay band. For the sake of better understanding, let us take into consideration a few instances. On the sensitive frontier of the nation, along the line of control in Jammu and Kashmir, we will have this BSF company deployed under command of a battalion commander of the rank of colonel; all very well except that the company commander would be drawing a salary not only more than his immediate commander but also the brigade commander who is two levels up in the hierarchy. At the administrative level a garrison engineer of the military engineering service will be drawing more salary that his immediate senior, the commander works engineer of the rank of a colonel; this anomaly will keep going up the chain in different appointments. At the ministry level the divide is fraught with even more complications. Take just one instance of two government servants, one civil and one military, serving together in the ministry of defence. A Major General having 35 years of service and working as an additional director general in the integrated headquarter of the ministry will be drawing less salary than a director from the OGA service. Can things get worse than this?

Even a school going child can understand that, on ground, all this will cause acrimony, bad blood and embarrassment to the officers involved, both military and civilian, apart from causing severe command, control and administrative problems. Operational service in an environment of conflict does not leave any space for such divides and segregations; this is something that policy makers either do not realise or tend to ignore, unfortunately, at the cost of national security.

Apart from the severe operational and functional criticality caused by this flawed policy, it also causes unacceptable loss to the officers of the armed forces. 100% officers of the OGA will end up in drawing special administrative grant (SAG) scale at 22 years of service whereas armed forces officers will reach this position after 33 years of service. To add salt to the injury, only one percent of armed forces officers will get the high administrative grant (HAG) which will automatically accrue to 100% of their civilian compatriots.

While making these grandiose policies, the service conditions of the armed forces are not given any cognisance at all. This is a force living in a democracy without enjoying the full fruits of freedom. This is a body of people which suffers maximum separation from families, truncated careers, stringent promotions, unlimited work hours, threat to life and a host of other problems. Yet, these dedicated people perform their duties in a disciplined, responsible and noble manner. Does this amount to nothing to a nation surrounded by enemies?

It is very clear that exploitation is in our blood and petty jealousies combined with turf wars guide decision making at the highest level. It would be expedient for our over smart Jacks and Jones to realise that no amount manipulation and manoeuvring of figures supported by fancy words can change the bottom line. The officers of the armed forces may be simple souls dedicated to their noble responsibility, but they are also educated enough to see through this blatant exploitation. What can the common man expect from a government which does not hesitate from differentiating amongst its own servants?

National interest demands that government policies be designed to integrate the country rather than cause bad blood which can have a dangerous backlash. The Indian government is taking its soldiers for granted only at its own peril. Does a nation, which has gained independence from foreign occupation after 1000 years, wish to go back in time to assuage the egos of a few short sighted bureaucrats?