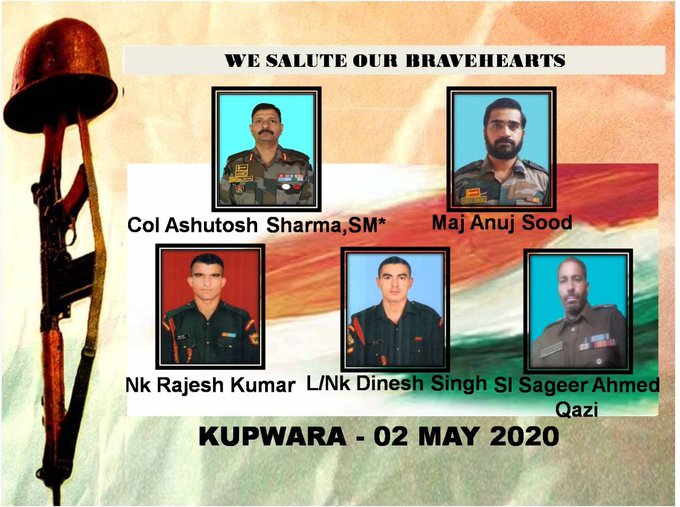 In Handwara, Kashmir, five sons of India, from different parts of the country, different security forces (Indian army and JK Police), different castes and communities, different ranks and responsibilities, found common cause in meeting a heroes death for the singular objective of upholding the sanctity and security of their country. By their gallant act they have sent shivers down the spines of the Nations enemies.

The nation is united in paying homage to her fallen heroes –  Colonel Ashutosh Sharma, Sena Medal and Bar, Commanding Officer, 21 Rashtriya Rifles (RR), Major Anuj Sood, Naik Rajesh Kumar and Lance Naik Dinesh Singh all serving the 21 RR, an elite counter-insurgency unit of the Indian army. Accompanying them as an integral part of their mission was Sub Inspector Shakeel Qazi of the Jammu and Kashmir Police who also embraced a heroes death in service of the nation and for the safety of his people.

Reports and inputs received suggest that the operation had been going on for a few days in the dense Rajwara Forest of District Kupwara in Kashmir. Initially, the terrorists managed to slip out by using civilians as human shields, which is to be expected since the their leader was a Godless Pakistani terrorist named Haider and Pakistani terrorists are unconcerned about civilian casualties. They have no compunction is using civilians as human shields, this in fact is their preferred form of defence.

The same group of terrorists was once again located at a house in Changimulla, Handwara. A joint operation of 21 RR and JK Police was launched immediately. Once again the terrorists chose to use civilians as human shields and it was under these conditions that a team comprising of the five brave soldiers, led by Colonel Ashutosh Sharma  personally, went into the house to evacuate the civilians.

“The team of Army and J&K Police personnel entered the target area and successfully extricated the civilians. However, during the process, the team was subjected to a heavy volume of fire by the terrorists. In the ensuing firefight, two terrorists were eliminated and the team of five Army and J&K Police personnel comprising of two Army officers, two Army soldiers and one J&K Police Sub Inspector attained martyrdom,” a statement from the Army said.

Thus, the team succeeded in getting the civilians out, but themselves embraced a heroes death. Saving civilians under all costs is a firmly embedded ethos of the Army and the unit. The team, therefore, took the correct decision as the situation demanded.  Colonel Ashutosh Sharma has been decorated for gallantry twice, he was a dreaded name among the terrorist cadre of the valley and very high on their hit list. He was also very well liked by the civilian population and a cult like figure for his command. 21 RR, comprising of soldiers from the elite Brigade of the Guards, is one among the best and most successful counter-insurgency units operating in the Kashmir Valley.

The big consolation is that the evil terrorists also met their justified end and died a dogs death in complete ignominy. Haider was a terrorist of Pakistani origin and a senior commander of the Pakistani terrorist organisation, Lashkar-e-Toiba (LeT). He was known as a scourge due to his activities involving extortion from poor and innocent civilians, molestation of  women and wanton killing. The region therefore will be safer and stronger than before, the sacrifice of our heroes has not gone in vain.

The courage and spirit that is being exhibited by the families of the heroes is mesmerising. Smt. Pallavi Sharma, the wife of Colonel Ashutosh Sharma, Sena Medal and Bar, exhibited commendable composure and fortitude while speaking to some media channels. “Instead of mentioning loss let us start with mentioning his passion, his dream and his priority and his love for the uniform and nothing can match that,” she said. “This loss is unbearable and un-repairable but what he did for his nation, for his units pride for his men’s safety, for safety of civilians. I have no words and I am proud of my husband,” she added.

The young company commander, Major Anuj Sood, is an alumnus of Punjab Public School, Nabha,  Punjab.  A brilliant student, he was selected to join Indian Institute of Technology (IIT) but opted to go to the National Defence Academy (NDA) to pursue a  family tradition and his passion for the uniform. “He has made a supreme sacrifice. It was part of his duty and what he was trained for. I feel sad for his wife as they were married 3-4 months back. He was meant to save lives,” said Brig Chandrakant Sood, the proud father of Late Major Anuj Sood.

In an Instagram post a little while back Major Anuj Sood wrote, “When you are older you will realise that the only thing that matters, the only thing, that you had courage and honour. Lose these things and you will not die any quicker. But you will be less than the dirt on your boots.”  It is not difficult to understand where his courage came from.

One has no doubt about the courage and commitment of the remainder three fallen heroes. They too have a magnificent story to tell and soon will become folklore. Not one among this team was an ordinary human being.

The Nation while being in grief is pouring out tributes. “Tributes to our courageous soldiers and security personnel martyred in Handwara. Their valour and sacrifice will never be forgotten. They served the nation with utmost dedication and worked tirelessly to protect our citizens. Condolences to their families and friends,” said Prime Minister Narendra Modi in a Tweet.

Even as this article is being written reports have been received that seven Indian army officers have volunteered  to take over command of 21 RR and fulfill the task of their honoured and departed colleague, Colonel Ashutosh  Sharma, Such is the unmatchable élan of the Indian Army.

This unprecedented chronicle of courage and commitment should serve as a lesson for such forces that cast an evil eye upon India. While they Nation will continue to find strength in its heroes, these evil power will suffer ignominy as their Godless tool Haider did. In death, as in life, he will remain cursed.